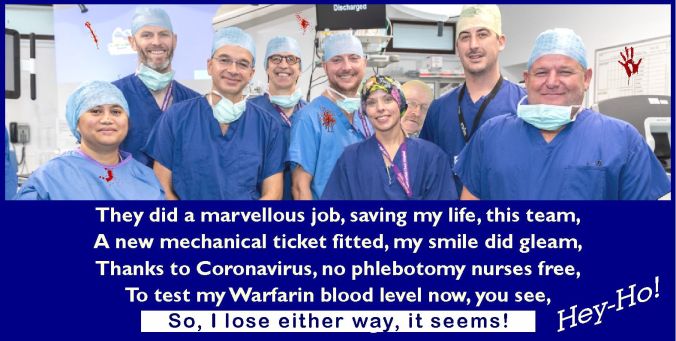 I’d just put this graphic on, and the Vampire Angel arrived! Tsk! 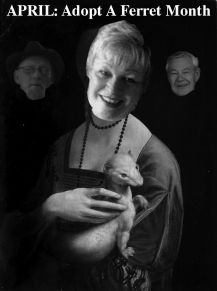 02:10ish hrs: I woke-up, passed wind from the rear-end. Then struggled to get out of the chair. The one that xyrophobia-suffering Brother-in-Law Pete damaged. While he was flat-sitting when I was in the Stroke Ward, and he fitted new CCTC cameras and searched for my valuables, which he found and took. The £300, second-hand, near-dilapidated, gungy-beige coloured, c1968, sometimes working – but not today, uncomfortable, rickety, ready-for-recycling, rinky-dinked, rattling, resurrected, reconditioned, recalcitrant, recidivating and rotting-away rusty recliner.

I clambered free of the seat, with a sense of urgency, and waggled, with bottom-cheeks clenched as best I could, to the wet room, with the middle right toe still aching from last nights stubbing! But it was a cunning false alarm! I sensed there was product in there, but it wasn’t having any effect on my efforts at encouraging any movement. So, I had a wash and wiped the contact points, and made for the kitchen. Took the medications, made a brew, and back to the computer room.

Where I noticed I had not cleaned up the area around where I knocked stuff over last night in my rushes to get to answer the phone. So a little clean up was performed, not a proper one, cause it was far too early to use the noisy hoover yet, and being as I didn’t have a quiet one, I didn’t. Hehe! 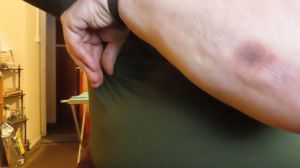 I kept on getting irritation on the arm when I caught it against anything, so had decker at it. A damned pretty artistic bruise had developed. (Clopidogrel or and Accifauxpas?) I thought that this should go with the leg photographs to the Tate gallery!

I got straight on with the WordPress updating on Tuesday’s post. I went to make another brew of Glengettie Gold tea, and when I put the teabag into the wast liner, I got a tiny little cut near the right-hand little fingernail. Which was no bother at all, cause I didn’t feel it? Thus, I knew that Nicodemus’s Neurotransmitter nerves were starting to go on strike, so I took care in which hand to use for which tasks I needed to do – Clever that! Must experience be learnt by? 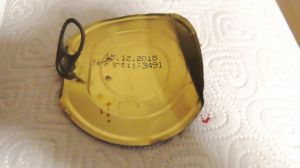 I had a nosey in the black bag to see what it was I’d nicked myself on, and found it was the lid of the can of Polish meat I’d had and enjoyed so much last teatime. And, oh, dear, I saw the sell-by date on it: The 15th of December – 2016! I did have a look yesterday I think, but must have seen the 15.12, and assumed it was this year? Feel a right Klutz, now! I’m hoping my innards will not be affected? Oh, dear, oh, dear! The meat tasted lovely as well!

Back to the updating. It got harder work, as Nicodemus’s nerve ends kept going AWOL, and so many errors were made. But I got it finished around 05:45hrs.

Then put a few piccies on Pinterest, sent out the Emails, and later on the TFZer Facebooking. It was a struggle, though. I’m not sure if it was Virgin Meda or FAcebook at fault. But things were very variably stuttery and slow. I added some photographs to my albums. It took me as long as it did to update the blog in the first place!

As I was finishing the job, another urgent summing to the Porcelain Throne arrived, in the form of borborygmic gurgling. Experience told me not to ignore it, and off I went to the wet room. “Argh!”, it was a painful, needing encouragement from me, evacuation. Messy, some indeterministic bleeding too. But at least not from Little Inchies fungal lesion. Harold’s Haemorrhoids were not happy, and the stinging began! So, the cleaning up and medicationalisticalisationing was carried out.

I carried with this post up to here. Then went to make a brew of Thompsons Punjana tea, and while the kettle was boiling, I took some shot of the morning view, three from the balcony, and the last one from the unwanted, wet-letting-in, disliked, thick-framed, light & view-blocking new kitchen window, with the Canon camera. I might be the lighting available, but I was pretty pleased with the resulting photos.

It looks so quaint – but I assure you, it ain’t!

All the parked cars of the self-isolators, enforced isolators (like wot I am!), sent home workers etc. was a sad reminder of what we’re all going through. And not a single person spotted in any of the snaps, as far I could see, anyway.

I phoned Sister Jane and her Pete. But, I got a message telling me the call has been put on hold?II tried to ring her back. Got another message saying an ‘active call,’ is preventing the connection. Got her next try, and ‘Sod’s Law’, or ‘Gerry’s luck’, while she was talking and telling me off, the dreaded wet and warm feeling from down below appeared – I asked her to wait for a second, had a look and found the white PP’s were mostly red – the blood was flowing from Little Inchies fungal lesion! I explained and shot off to the wet room.

More toilet roll was used in cleaning things up. Washed the area, and a few Argh’s and Ouches were muttered as I was medicating things. Humph!

Made the brew, and got on CorelDraw to do some graphics for another template.

The usual weariness and fatigue dawned early in the day again. 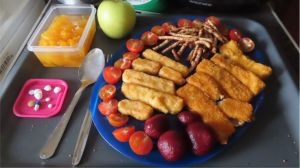 Got the oven on and nosh started. A chance to use up some dated items from the freezer. The fish fingers in breadcrumbs, substituted for battered ones by Iceland. Not very tasty, I think they may have been made with pond sticklebacks? The well-out-of-date Twiglets, the donated by a resident for me tomatoes were grand. The Halloumi sticks passable, and the beetroot, perfect! Overall, a Taste-Rating of 5/10.

I went to do the washing up, and the landline lit and rang. It was my Angel Jenny, to tell me that the food she had added to her Sainsbury order was coming via Frank to be delivered to me. So kind of her to help me like this.

Especially as I can’t pay her back until I can work out a way of getting some cash from the ATM or somehow.

Minutes later, the doorbell chimed. I got to open it, and two carrier bags had been left outside by Frank. I was picking them up, and Frank’s voice said something to me, I couldn’t tell what he was saying, but thanked him.

As expected, Sainsbury’s were out of stock of some things, some substituted. The caramelised biscuits with Caramel wafers, but at least I can hand them back for Jenny to use, or share later with the Wednesday gang when, if,  it ever gets back online. No bread or cobs substituted. As to be expected, in the current climate.

It is lovely that Jenny is helping, but I will not bother her again, until I can find a way to pay what I owe her, including the £25+ for this order. Bless her kind cotton socks. She helps so many people. I’ll manage somehow.

I put the things away, and spotted another tin in the tea cupboard! Of Pork Knuckle, Great! And, it’s still in date, only just, but still. Hehe!

I’ll have a beef cook-in-the-bag in onion gravy tomorrow. Now I have some leeks and parsnips to add to it, thanks to Jenny & Frank.

I got settled down, in hopes of getting some sleep, but the mind was buzzing with problems and not letting me relax. Eventually, much later, I did nod-off… And the landline rang and flashed! It was a lady asking for Angela and Frank. I explained this was the wrong number, but I did not know the telephone digits of Angela and Frank, who live on the top floor. The poor lady sounded so disappointed.

Back down on the £300 second-hand, not-working, uncomfortable rickety recliner, in search of sweet morpheous, which was in no hurry to dawn on me. The Thought-Storms started and stayed with me a while. After the half-asleep prognosticating, I felt so confused, low, incapable, and pathetically self-hating.

I did get off into the land of nod – but had the oddest of dreams, and it was so lucid afterwards, I wrote down bits I could recall on the pad. I’d died if osteofluorosis, and they would not let me into heavens gates. St Peter (In the dream, Housing Patch Manager, Angela Gould), refused to let me in until I had got a disclaimer from Glengettie… I was returned to life and earth to fetch one, and everyone was dead. Bloody Coronavirus, I cursed! And, walked (I was the same age, but all my ailments had gone?), around the shops to get food, but everything had gone mouldy, and not a tin opener to be found anywhere… Suddenly, I was in New York, the same scenario, all dead… As I walked between the abandoned dead body filled vehicles, a rhinoceros came charging at me, stopped short, and licked my face? This beast knocked me down a drain… After that, it all goes vague.

2 thoughts on “Inchcocksi – Wednesday 1st April 2020: I questioned my own sagacity today!”