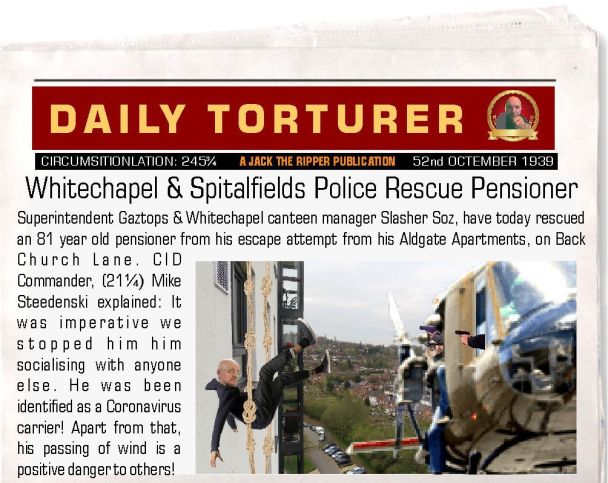 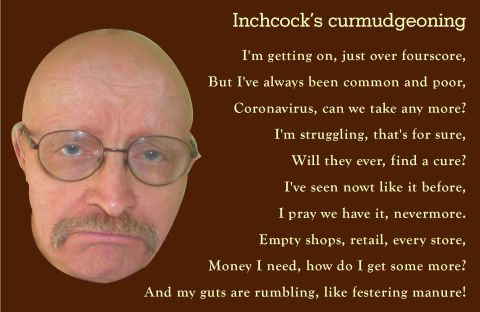 01:00hrs: I woketh up, and soon realised, the moment I straightened the legs to move, that Rheumatoid Arthur Itis was back with a vengeance! Still, he has been very kind to me lately, now it’s payback time! The need for a wee-wee encouraged me to put up with the pain and remove my over-heavily stomach-burdened body from the second-hand, c1968 recliner. The GPWWB (Grey-Plastic-Wee-Wee-Bucket) was utilised, for a ferocious, vindicative HDTBS (Heavy-Duty-Torrential-But-Short) wee-wee. Again, oddly, stomach pains started after the release?

T’was then that I felt the wet warm trickling on my leg! Little Inchies fungal lesion was bleeding again, but not too much. A cleaning up and medicationalisationing session was carried out in the wet room. It took some time, and was a tad painful, but had to be done. At least the flow was stopped with relative ease this time. Other bonuses were no toe stubbings, walking into doors or walls, knocking anything over, or visits from Shaking Shaun or Dizzy Dennis were suffered.

I didn’t feel too bad at all, even with Arthur Itis’s attention, and then Duodenal Donald joining in. How can I describe it for best? I seemed more resilient and determined not to get depressed or feel sorry for myself this morning. How or why I was in this new-found la-la state of mind, remains a mystery. I anticipate things will change later. 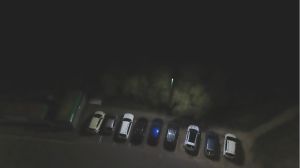 Off to the kitchen, and got the kettle on. I took a blind shot of Chestnut Walk below. It had to be blind, thanks to the new kitchen windows fitted in the upgrading of the flats. That the Coronavirus has now put a stop to. The thick-framed, rain-letting in, light & view-blocking windows, with the ledge that sticks out too far 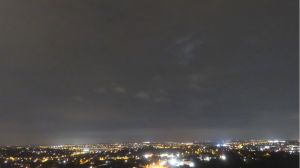 for me to see what is below, Fire engines etc. or see anything to photograph without using the step-ladders, which usually ends up with an Accifauxpas and personal injury! But, still, it came out alright.

I got the computer on and made some comment replies. Then got on with beginning this blog template, as far as here. During which, the rataplan of rumbling from the innards started, at the same time as the horrendously loud ‘Hum’ increased in volume as well! There’s no peace here!

I then made a start on updating the wearisome Wednesday blog. I don’t think I meant wearisome? Ah, a belated call to the Porcelain Throne, so off to the wet room.

Well, that was an odd session. It needed a little pushing, and the plop-plopping started, stopped, then it started again. The room, (Possibly the whole flat) filled with a distinctively evil-smelling, mephitic aroma that I could still smell hours later! There was no mess at all, the nugget-shaped evacuation cleared away first pull of the chain. Minimal bleeding from the rear-end and Little Inchies fungal lesion was not leaking at all? I felt a smidge light-headed when I rose from the Throne, a good job I had the four-pronged stick with me. The fragrance seemed to follow me out and into the kitchen. I wondered if the out of use-by-dated meat I ate, might be a cause of this?

I did some more updating, then poddled to the kitchen to start the vegetable preparing and get them into the crock-pot.

I think I got carried away somewhat and made too much! Mushrooms, leeks, red onion and parsnips went in the pot (All my thanks to Jenny, who got them for me ♥). I added some gravy granules, hickory and light soy sauce. No salt needed with the Soy going in. I put it in Auto setting, which brings it the boil, then goes on to the low setting.

Blimey, toothache just came on without any signs or warnings. So bad, I tried to ring the surgery to get booked in – Closed due to Coronavirus! Ah, well! Now I’ll need some extra painkillers. But as I’m not allowed to get out to get cash or shopping in, how to get the Co-codamol is another unsolvable problem for me to contend with. I’ve a supply of paracetamol, but they are not very strong. A bit like me. Hahaha! 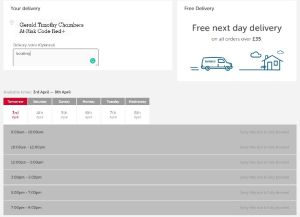 I then tried to get an order from Iceland. But, no! I’d hoped doing it earlier in the day might help, but no!

Then I tried for an Ocado one. Unbelievable! The site let me get all excited and make an order up, it took me a while, but I seemed to be going to get some things that I am out off. I was going to ring Jenny and ask if she wanted anything, that way I could pay with the card and settle what I owe her, Great! But no, I pressed the button to carry on, thinking I could add anything later that Jenny might need, and the No Slots Available sign came up! What a Con! Botherations and blasticulisations! Swine!

It cost me no end of time as well! ‘Do they think I’ve got nothing else to do, nowhere to go, no one to visit… Come think of it, I haven’t! Hahaha!

At the moment I got started on preparing the meal, the mind engaged one of its involuntary-unplanned ‘Panic Modes’. It does this now and then. Although it’s been a few months since the last time. This crushed my confidence and willpower. I tried the usual tricks to indurate my mind, and free the tension and worry. It was so discountenancing and ignominious. I can’t truly remember much of the following hours. 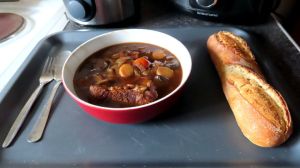 Not even taking this photo of the fodder, nor eating it. So, I have no taste rating or comments to make on what it was like. And, how come I took such a decent photo if I was not in control of the brain-box at the time?

I started to return jitteringly, back to my semi-normal state, as I woke up. So I must have fallen asleep in the recliner?

I found the kitchen tops all clean, and for me, tidy. The pots washed. And several hours had passed since having the meal. What took place in between shall remain a mystery.

I decided to get the hand-washing done, and then get a much needed, long-overdue ablutionising session done. But I was questioning everything I did with myself as I went along? The fretting continued in the background. But I was somehow, a little chuffed with myself for deciding to get the handwashing done. Maybe to give me something to concentrate on that was not too complexed, and block out the worrying?

Huh! The best-laid plans of mice and men often go awry – as in this case! There was no hot water! I was not sure if the element had gone again, or I had left the tap running during my ‘blank-spell’. I still can’t find Jenny’s phone number, so Emailed and asked her if her (hot water) had gone off. She kindly emailed back that it was alright in her and Franks apartment. I decided not to worry, but phoned warden Deana just to inform her, got a Not-Available message.

So, no hand-washing, shave, teggies done or showering for me. I changed my plans and got back down in the recliner to watch some TV… and did as well. The earlier kip made getting to sleep properly impossible. I kept dosing for a few minutes and waking up repeatedly.

I think the phone flashed and rang. Unless I dreamt it had? Cause there are no recollections of who it was, or what about? I sensed that other stuff happened, but blown if I can recall what.

When I got off to sleep properly, I think I slept uninterrupted for over six hours! Which was good!