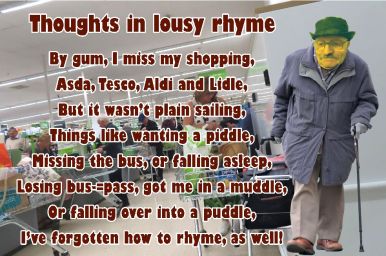 04:25hrs: I woke, with the tummy rumbling, and some wind fluttering from the rear-end. This was different! Aha, the Porcelain Throne needed. Maybe this time, I can actually move something, if the Macrogol has done its thing, I thought. Action needed.

I glanced at the pins (legs) before attempting to move, it seemed the left one had put on some fluid or weight, the right one had lost weight. I know this happening is regular, but today it seemed a more marked difference. Hey-ho!

I rose from the £300, second-hand, c1968, sickeningly beige-coloured, none-working, rickety recliner, with such ease, not known for a long time. Kept my balance as well! Oh, Yes!

The toes and feet were just as bad though. But during the short hobble to the wet room, I recognised that many ailments were on strike this morning. Hehe! Saccades-Sandra, Duodenal Donald and Reflux Roger pains were none existent! Anne Gyna, Shaking Shaun and Arthur Itis were hardly giving any hassle at all! Nicodemus’s neurotransmitters were going off and on at will. Shoulder-Shuddering-Shirley as having the odd jerk. It’s just as well, the toes and feet were bad enough on their own.

Things were very pleasing in the ailments department, but experience prevented me from adopting a smug-mode, just a slight inkling of semi-hope instead. Haha! 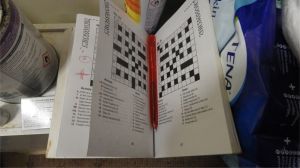 I got down on the disabled raised Porcelain Throne and instant action! For a second or two, then I hit a half-in/half-out, no-go period. Which was not wasted, I got on the crossword book and got a few solutions done, and the ‘flow’ began again. The pain was alarming, but it did it all of its own accord, no effort needed from yours truly at whatever. All I had to do was bear the pain. It’s alife innit, gerrin’ old! But once again, things could have been a lot worse. Harold’s Haemorrhoids and Little Inches fungal lesion had both only produced a few specks of blood! I moved my slight inkling of semi-hope, up to a Semi-Contented-Status. I still felt that things were going too well, and a distant, nebulous, concern lingered in my mind.

Off to the kitchen, took the medications as best I could. The medicine avalanche and tumble yesterday has left me guessing at what tablets are what, from the selection, I’d retrieved from the floor.

Then I made a mug of the Glengettie Gold tea.

I decided to get the mushrooms in the slow-cooker on a low heat setting, ready for later. I added sea salt, Hickory and Soy sauce to flavour it a bit. I fetched the Nikon camera and took these photos.

This was the first time that Colin Cramps gave me any bother this morning, and he was in a bad mood. It had to happen, things seemed to be slowly getting back to normal now. Hahaha! Whoopsies and Accifauxpas Readiness Mode engaged!

I got the black bags made up and got them on the trolley-walker in the hallway, to be taken to the waste-chute when time allowed.

I returned to the main junk-room and got the computer on. First thing, I downloaded the photos;

No signs of it, I think I’ve worn out the carpet with

my dragged feet and the four-pronged walking stick, searching to no avail. Grrr!

Probably because my losing the lens cap and my getting all fussed, flummoxed and frustrated, it was hard to concentrate of the updating of yesterdays diary. But I persevered, with the damned annoyingly loud ‘Hum’ that was weeing me off more than usual! Not much noise from Herbert this morning.

I got it finished, and I sent off the link via email. Put some shots on Pinterest. Then went on the WordPress reader for a good while. Went through the comments, it didn’t take long, there was only one. Humph! Then on to Facebooking.

I then made a start on calling … No, I didn’t! Sister Jane phoned me. As she started talking, the door chime rang out. I asked Jane to ring back later and off I went to investigate. I got to the door and found a box of freebie food from the Government. Obviously, my cancelling it didn’t work yesterday. I might have been too late in doing it. I hope they do not send any more. I got the things in a few at a time, the box was too heavy to carry in. I put the stuff away and sorted things out a bit. 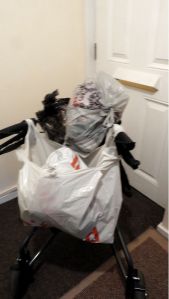 I got carried away clearing up and made another couple of boxes to go to the waste chute. I got them dropped down, and a feeling of expectancy of something different about to happen on my way back, not necessarily a good thing either is on its way, came over me. Someone or thing had walked over my grave!

I got into the wet room, for a wash and freshen up, not the full ablution session. I’d changed the hearing aid batteries and was clearing out the ear wax, and the landline rang out. Whoops, I’d forgotten about Jane ringing back!

Within minutes of nattering and making notes of the things Jane told me I was doing wrong or not doing, that I should be. (Hehehe!)

Boy, the legs were cold (not wearing trousers does that to you, sometimes). Yet the sunshine outside was strong. Jane said she went out earlier and it was nippy. I suddenly got the feeling that I had left the tap running in the wet room, panicked, muttered something like ‘Argh! back in a bit’, and shot off to infestigate, well investigate I should have said. All was okay in the wet room, and I returned quickly and explained my ignorant behaviour. It was hard to hear what Jane was saying, a very echoey line, and she was talking rather fast.

Then Reflux Roger and Stuttering Stephanie started off! Making hearing, well, understanding what was said even harder. I think Jane got a bit frustrated with me, understandably. I plan to ring her back later when Stephanie and Roger ease off. It must be difficult for folks trying to have a conversation on the phone with me. It is for me, too.

My previously fair mood changed to a lower level. I made a mug of Thompsons Punjana tea.

When I returned for the umpteenth time to the computer, I found the missing lens cap, under the recliner! What a klutz!

I feel down again now, and my self-esteem dwindled again. Hello, Herbert’s clunking about again doing his models! At least I know he’s not ill. 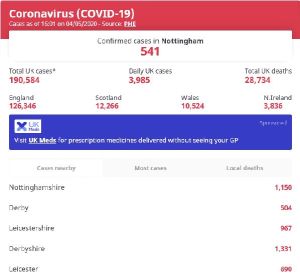 I pressed on with this blog for a few hours.

Then went on Nottingham City site’s latest Coronovavirus figures. There are now 541 confirmed cases in Nottingham. Locally, East Midlands we are still the second-highest City for deaths and confirmed cases. And, of course, we don’t know if these numbers are only for people who are in, or died in the hospitals or not.

I made another mug of tea, the last one I let go cold. Tsk!

As I was making the brew, that sickly wet warm feeling from the lower regions was felt. Oh, dearie me, and Repulsive-Globberatons! So, back to the wet room to clean up the Fungal Lesion. Not one of the least painful or looked forward to jobs. But, it had to be done. I winced, and gave out the odd ‘Oooh!’ and ‘Argh’! But it was done. The PPs changed. And the medication applied. ‘Earargagagwumph!’

I did a super-hand wash afterwards. Ears olive-oiled. A clean-up, I used the freebie vegetable soap for the first time. It suds-up well, not any smell with it. Unless the imagined smell of cauliflower I sensed, was real? It lasted well. Hehehe! 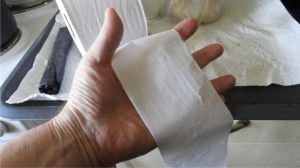 It brought out the wrinkles a bit, mind. Haha!

I used the new toilet roll delivered today, to erm… dry things off with. Did you notice how narrow it was? Still, better than nothing, I’ll be happy to use it for its intended use. I’ll just have to be careful when I use it. Oh, yes!

I rang Jane back, to see how she and Peter were going. I discovered I should not be eating mushroom pate, Jane is having Steak and Kidney pie, Peter is in the Garden reshaping a tree stump, and it’s cold outside. Hahaha! 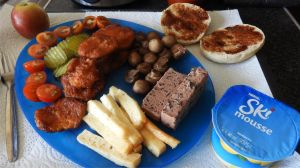 I got on with sorting the meal. Ended up with a delightful plate of, Mushroom pate (Sorry Jane). sweet potato fritters (Excellent!). Halloumi sticks (Not bad), mushrooms (seasoned with hickory, soya and sea salt). Pickled Gherkins, a mix of sour Morrocan, and sweet Netherlands tomatoes. One of the freebie red apples from Serbia. One super-tasty sourdough muffin with Marmite, and a pot of lemon mousse. having to use the Ski first, as they have a later date than the Tesco ones that Jenny got for me. All in all, a Flavour-Rating of 8/10, had it not been for the Moroccan tomatoes and the powdery apple, this might have been the highest-rated meal this year.

Got the pots in the bowl to soak. Down in the dangerous, c1968, rickety recliner, and got the TV on. 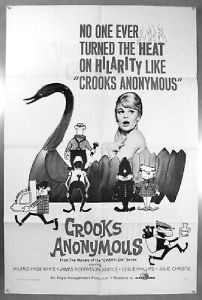 I found a 1962 film about to start, on channel 81 Freeview. ‘Crooks Anonymous’, starring Leslie Phillips, Stanley Baxter & Wilfrid Hyde-White, James Robertson Justice, Dick Emery, Julie Christie, and Norman Rossington. It was badly acted, terrible script, black and white… and I loved it. Pure nostalgia! I wallowed in it! Several views bringing back memories of things I was doing, back when I was alive. And not a single nodding-off! (Although it was a close call a few times. Hehe!) Within minutes of it finishing, I was deep in the past, recalling names of people, and incidents, I thought I’d forgotten.

I don’t seem to remember owt after that. So, I must have nodded off proper, for I woke up four hours later, feeling as bright as a button. (I must look up where that phrase came from). And got up for a wee-wee!