03:55hrs: After a decent sleep (5 hours! Yes!) and not having a single interruption for a wee-wee (Good innit?), I slowly got my body assessed, and the brain joined me a few moments later, with the realisation that I needed a wee now, urgently! So, the usual persnickety struggle getting out of the £300, second-hand, c1968, uncomfortable, not working, rickety-recliner was performed (With a lot less bother and pain than usual, too. Oh, yes!), and fumbled my way to the wet room. 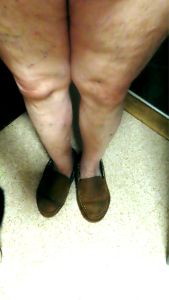 This was a riskier business than expected. Walking was more challenging than it had been for many a month, if fact, since the stroke. The right ankle was weak when walking, and I was nervous about is giving way again, like it did yesterday. I took the ankle strap with me, to have a go at fitting it. No chance, too complicated for me, and overly painful manipulating it. Grumbleshaggles! Still, the SSWW (Short-Sharp-Wee-wee) went well enough.

The legs were suffering from fluid retention again. The toes and soles of the feet were terribly-wicked stinging!

I carefully made my way to the kitchen, made a brew of my beloved Thompsons Punjana tea. And did the health checks and took the morning medications. 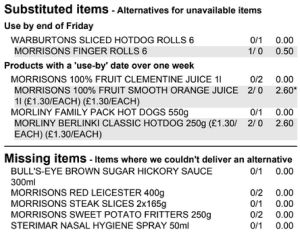 I got on the computer and checked the Morrison email. Substituted items and missing ones too! The only ones that bothered me were the Morrison’s Nasal Hygiene Spray, Leicester cheese, and Potato fritters not being available. None of them was obtainable on the last order, either.

Still, I mustn’t grumble too much. (Oh, I don’t know though) Hahaha!

I got yesterday’s, post updated, and email links sent off. Sent some photos to Pinterest. Visited the WordPress Reader section. And made some comments. Then I had a marathon session on TFZer Facebooking. But not as long as I would have liked to have. The template for today’s blog needed doing, and the ablutions had to be done, in time for the Morrison order arriving. So, off to the wet room for a stand-up bath session.

It’d been so long since I needed to wear it, I could not remember how it should go on! No way could I master it. Then, of course, I found it was too painful to wear anyway! Yer knows, being such a lucky bugger like wot I am, tends to make one feel guilty. (sic).

I also noticed how the right leg was much thicker than the left one. (It never rains, but it pours, one thing after another, out of the frying pan, into the fire, no day is my day, life on a razor edge, life going through the wringer, and A Broggleknockersworther’s life for me!

So, in agony after the hour’s worth of frustration and failure get the support-straps to fit, then finding it was too painful to wear, then going through more suffering in taking it off. And stubbing my poor old overgrown nailed toes against the edge of the wet room door as I exited! I was approaching the darkness again!

Light at the End of the Tunnel Search Result: Still, Yesterday’s vein explosions in the right leg had died down considerably! And Herbert was back at the knocking and drilling building his models.

It always cheers me up to know that.

Eventually, I got started on with my ablutions. All went remarkably well. No teeth or gum bleeding! Only one shaving nick. The dropsies were only about six. All in all, a change of fortunes mayhaps? (No, you’re right!)

I got some potatoes in the slow cooker for later on.

Minutes later, the intercom rang and lit up. It was Morrison’s deliveryman arriving. I pressed him access, and he was soon up with me.

As he placed the bags through the door for me, I noticed that the foils baking trays had been crushed up! I pointed this out to the gentleman. He grabbed than and reshaped the crudely, saying, “There you are, they’ll do!” I pointed out, “No, they won’t!” He replied: “I can take um back if yer really wants me to!” – Me: “I do!”. Him: “Alright, then!” Off he trotted, and I began to take the bags in ones and twos to the kitchen. There was a lot of them.

As I went back for the last carrier, I heard a tapping on the door. Had I not been where I was, I doubt if I would have known about it. It was the young man from Morrisons

returning, he had found a can of antiperspirant in the box and had come back to give it to me. Kind of him that! Thanks. After over an hour, I’d got the foods put away.

The feet were stinging something rotten, so I took off the slippers.

I espied some dogs taking their owners for a walk, down in the bottom field below the tree copse. The little white and black dog had one hell of a loud bark on him!

I checked the tissues properly, and they seemed okay. So. I loaded the walker-guide-trolley up, ready to use. Then I made a phone call to inform

Jenny that I would be down soon to drop off the tissues.

Jenny was concerned with paying for the tissues, and said she’d leave the money in an envelope.

I made sure that the chocolate treat and mini bottle of wine were in the bag, and was about to set off, and I had to divert to the Porcelain Throne.

It turned out to be a  similar session to what yesterday mornings were. A Constipation Konrad controlled evacuation! Hehe! Painfully suffered and messy with it! 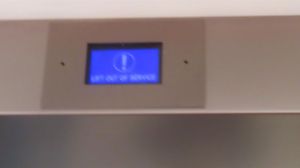 The hobbling was painful in the extreme, but okay with the use of the guide. Getting out through the door with the three-wheeler had to be done with care. I avoided any knocks and toe-stubbing.

When I got to the elevators, only one was

working. So, it was a while before it arrived.

As I got out on Jenny’s floor, the lobby looked like it had been being worked on?

I got in the flat’s lobby, collected the envelope Jenny’d left for me, and put the bag near the door and rang their bell, then back to the lift

It appeared that they had had a water leak of some sort repaired? Just being nosey. Haha!

It took a long time for the lift to get to me, but I was in no particular rush.

I entered the cage and pressed the 12th-floor button. I went into a sort of vague haze, and when the doors opened, I was on the ground floor! A few people were waiting to get in, and I apologised, telling them I was on my way up, and it came down. Muttering my apologies and feeling a fool! I do not think I am a very popular person now! I had a red face and was a bit nervous in case the lift did something else unexpected. Humph!

I thought about it on the way up home. Perhaps with the one lift only working, this had thrown a spanner in the works to the other elevator workings?

Back in the flat, I made another a mug of Glengettie tea. The humming from the toes, ankle, and right leg was not getting any easier. I nearly took another Codeine 30g but managed to stop myself.

At long last, I got around to creating the template for this blog, made one for tomorrow as well. This cost me a lot of time, and I hadn’t started on this one yet!

The mobile phone chirped into life, it was my Zyrophobia suffering, supercilious Brother-in-law Pete. He was in the car after taking Sister Jane to the shops. He’s going through some worry with his health at the moment. We had a natter, and I was giving him the benefit of my medicalisational knowledge (Hehe!) We lost the signal. I put this down the West Bridgford, a previously posh area of Nottingham, now being snided out with drug pushers ‘cuckooing‘ where they would be least expected too, and illegal immigrants being housed in HMO’s by the swine who control them, again in an area that the police would think was safe. Anyway, this was causing an overload on the Mobile Phone antennas and why Jane & Pete are struggling to use their mobiles? Just thought I’d mention it.

Pete rang me back on the landline. Much better! We had a good chinwag and talked of some serious stuff. But still managed a laugh or two.

I got on with this post, at last. Hours passed, ever correcting mistakes.

I nipped into the kitchen and took these three snaps of the scenic view.

I got some hot dog sausages in the saucepan. I decided I can’t go on with the computing, Saccades Sandra kicking off now. (Well, it’s only fair and sociable to share the pain and discomfort amongst the ailments. Hehehe!)

So, I decided to get some nosh. Which were home-made hot dogs, and mini-tomatoes. With a lemon flavoured mousse. The photo I took of it, has disappeared into the ether… Well, alright, I admit it, I’d not put the SD card into the Nikon! Twittleworthy-Idiot!

I also forgot to take the evening medications.

Amazingly, once settled down, I was soon off into the land-of-nod… Zzzz!

2 thoughts on “Inchcockski – Tues 26 May 2020: A day of instabilities, perilousness and cock-ups. A normal day, then?”