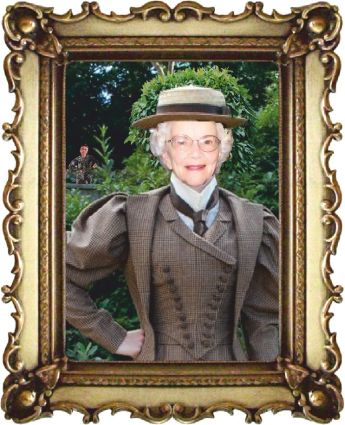 03:40hrs: I woke with bits of a dream lingering, and wrote down some scribbled reminders to use here: In the dreaming, I was no longer the wiseacre, but a sage, a patriarchal doyenne, a lector: I was up high on a stage, with thousands of people around that wanted to ask me for advice, guidance… I arrive late; the trolley bus broke down… there were guards or bodyguards, each wearing Robin Hood outfits? All confusing, I then found I was in a chair, an electric execution chair, and people started to come in one at a time to ask a question: I got annoyed because all they wanted to know was how to make money, the lottery numbers, horse race and football match results, and winners, etc. and so on. That’s it I’m afraid, no idea if I was electrocuted or what?

As I put down the writing pad, the need for the Porcelain Throne usage arrived, and pretty urgent, it was, too! No hesitation, I was up and out of the c1968, second-hand, none-working recliner, got the stick, and hobbled limpingly to the wet room (Oh, the poor feet and toes!) in significant discomfort.

It was a quick but painful, messy, smelly, sticky evacuation. Cleaning up and medicationing after the event, took me ages and was not a comfortable experience.  The tootsies were terribly-tender,

Stubbing my tender uncut toenails against the seat raisers metal legs, was not a good idea either. Argh! Gragglespitgurgle! 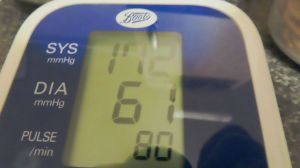 Cleaned up and off to the kitchenette. Did the Health Checks. The hemadynamometer indicated that the BP SYS was still going back up higher. Cragknackles! Took the medications, and then I made a brew of my beloved Thompsons Punjabi tea.

The ‘Hum’ was about as loud as it’s ever been. Will mankind, the scientist, the governments ever find out what is causing this? I suppose not.

I managed to take a shot out of the unwanted, unliked, rain letting in, photographer and old people-hating designed new kitchen windows, of Chestnut Walk. Not many folks around yet.

Then on the computer and made a start on this blog, as far as here, then updated the Wednesday diary. Sounds easy, doesn’t it? I wasn’t, took me hours! Poor old thing. Haha!

Posted it off to WordPress, then I went on Facebooking.

Then, it was time for the ablutionalisationing to be done. So I did! Back in a bit, folks!

As I was going into the wet room, the Post-Micturition After-Dribble, leaked again, as a Pre-Dribble! Oh, dearie me! But this did not stop my embarrassment, no that’s not a strong enough word. Mortification is closer. Perhaps the one I want is ‘Shame’. The PPs proved their worth again! Luckily I was about to have a shave and shower.

The medicating went well. Little inchies fungal lesion was not bleeding, or even sore!

The furuncles were not too bothersome.

However, Harolds Haemorrhoids were smarting in the extreme!

I departed and got some clothes on, well, someone just might call on me. Haha!

I got my bath towel washed. Done, rung and hung of a coat hanger above the kitchenette sink to start drying, when it lost its wetness, I’ll move in onto the flat airer. It’ll likely be about September by then!

I put the kettle on and thought about having a few biscuits, or even a mini-apple pie, but as the belly wobbled, heaving the rest of the body with it when I turned towards the fridge, I decided against it. Guilt reared its ugly head! Hahaha! 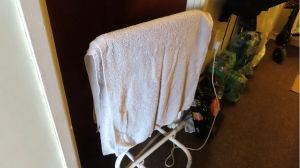 I got the other white towel out, got it on the stand-up airer, warming ready to be used tonight.

As I turned to come back, I caught my right foot toes on a leg of the airer.

My language uttered silently, thank heavens, was not very good, indeed, it was naughty! Tsk! 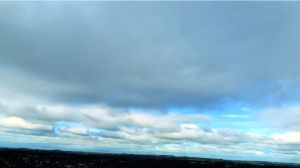 As I made a mug of Glengettie tea, the clouds seemed to be getting thicker, but no rain.

I did some updating on this blog, and then went on CorelDraw to try again to get some graphics done for the headers, I’m right out of them now.

Oh, heck, Dizzy Dennis has come at me full blast. Going hazy. I’ll have to stop and get settled down.

While I was sat quietly, the phone went and it was Brother in law Pete. I’d not sent him the link for the blog. I’m not sure what else we spoke about, but I reckon we had a laugh about something. I found some scribble on the pad when I got back up later. It must be when he’s going back in for the treatment. ‘Pete – Wednesday 10:15hrs’ I’ve written.

I got back down after the call, but could not get to sleep, which I wanted so badly. But things cleared, the fog in the brain faded, and I got some nosh sorted out.

Rice, mushrooms, tomatoes and chicken. I used the rice cooker for the first time for this meal. Turned out okay. Nothing special, but enough to make me feel a bit better in myself after I’d eaten it. Mind you, the pot didn’t half take some cleaning afterwards

As I was washing the pots, Dizzy Dennis returned, but mercifully, only for a few scary minutes. I still decided to get back down and try to get some kip. But it was no good, I even put the TV on, that usually gets me off into slumber, but not tonight!

After an hour or so, I decided to get back up again, and on the blogging, WordPress Reading, comments etc, that I had not done yet. updating.

Oh, I’ll send the link off for Pete first! 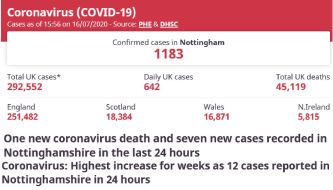 I made a mug of Thompsons Punjabi tea. The evening medications were taken, better late than never!

Checked on the local Coronavirus latest. Then tried to get some graphics done on CorelDraw.

I did manage to do two more, but fatigue, tiredness and Nicodemus’s. neurotransmitters meant I had to get this finished and posted off, then get a drink and summat to eat, and hopefully, some Sweet Morpheusness!