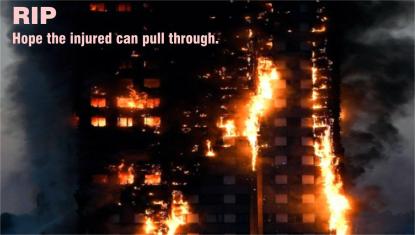 0400hrs: Stirred from a dream filled night (Of which I can remember nowt!) throughout which I was ever waking up and trotting off for a wee-wee. I think I suffered this the last time I had to have the Enoxaparin injections?

Gave up trying to get back to sleep, and decided to get the washing done in the laundry room before the District Nurse arrived. No idea when she will come. Had a wee-wee.

Took the washing down and got it in the machine and came back up to the apartment.

Took the medications and made a brew and it was time to go down to move the clothes into the dryer. Got a phone call from Sister Jane. She told me to put the TV on to see the horrible fire in the flats in London and asked how I was feeling this morning. Nice of her. Had a wee-wee.

Down to the laundry room and got the dryer working, then back up again and got the TV on. Terrible news, and from what I listened to from the tenants who had escaped the conflagration, they had been told the same as us here about what to do in the event of a fire, those that did follow the advice must surely have perished. No fire alarms sounded they say?

The computer on and did some Facebooking and WordPress reading.

Had a wee-wee and down to collect the washing.

Cleaned the filters, washer and dryer and back up again to the flat.

Worked on updating the diaries while watching the news of the disaster on the gogglebox. Couldn’t use the headphones or I would not hear if the nurse arrived and buzzed the intercom line.

Very depressed with the news. It had filtered through of how brave the emergency services were.

The nurse arrived, a cuddly little thing, asked many questions and injected the tummy. She was here about an hour or so. Said someone would call again tonight around 1700hrs, Bless her.

Had a go at doing some graphics to take my mind off of the poor souls that were living in the flats fire.

The Morrison delivery arrived, and when I moved to go to the door, some severe pains from the innards appeared.

At least I know I have someone to tell the tale too, or will have when the District Nurse comes tonight.

Put the fodder away and cleared the waste bags out to the chute.

Not so good at all, now, even Dizzy Dennis paid me a visit. Humph!

Signed off on Facebook, no way I can concentrate on that or graphicationalising how I feel now. Befuddled, Hehe!

Got the pod peas simmering in the pan. Not having anything else heated today, I might leave the meal when the peas are done until after the medicationalistical (Hehe) visitation later.

Updated this to here, and got the ablutioning tended to.

Got the early meal sorted. Not that is was difficult with no hot fodder involved.

Took the medications and gobbled the food down.

Off for a wee-wee.

Settled to watch the TV with subtitles on, so as not to block the hearing with the headphones in case I don’t hear the District Nurse arrive. I could not read the subtitles though, they were too small, so I put the news channel on about the fire in London.

Fell asleep, woke to need a wee-wee, tended to this, made a mug of tea and as I was doing so, felt sure I could hear noises, but where from? It took me a while to realise it was coming in through the open window, I went out on the balcony and found it was some

residents from a flat a floor above mine. Got the hearing aids in and realised they were slightly intoxicated, bless them.

They were out in the warmish sun, legs over the balcony railings, a selection of drinks to hand and shouting in ‘Gibberish’, I think it was.

Got down in the second-hand £300 recliner, and despite the twinges, stabs and unrelenting pains now suffering, I fell asleep again. It was well past my bedtime now, and still, the nurse had not arrived. The nurse earlier said they would be here at 1700hrs, but it is now 1900hrs. Had I missed her when I fell asleep?

Up for another wee-wee and noticed how beautiful the evening clouds looked with the addition of the aircraft exhausts. The almost ghost-like bit, centre left confused me? Haha!

Popped out on the balcony to take this shot, so the unique mystery addition was not reflections from any glass?

Fell asleep again, and just after 2100hrs the intercom burst into life, the nurse had arrived. Cuddly little thing she was. Soon had me sorted with the injections and I bid her farewell and got my head down. But the brain and new pains from the stomach ensured I did not nod-off for hours.

Hey-ho, so much better off than the poor souls affected by the Grenfell Tower disaster!

This is the latest photograph of the complex. 12 dead, still unable to search for bodies 24 hours after the fire started. Dozens  injured, many critical.

So, I do not have the right, intention or inclination to moan about things.

My heart goes out to them.