0205hrs: I had laid a while pondering and allowing the mind to do its usual wanderings, perusing, fearing, worrying and attempting to join the body in some form under my controllability. As the reality that it was the weekend again dawned, and expecting the noises from Herbert above to start any time now, the innards began grumbling to notify me of the brewing up in preparation of a Porcelain Throne visit.

By now with a confused, befuddled brain, I rose out of the £300 second-hand recliner. Not such an easy task this morning, as Hippy Hilda and Duodenal Donald both started in a bad mood.

Off to the Porcelain Throne. Extremely messy evacuation, Harolds Haemorrhoids had been bleeding a lot, left me with a sanguineous situation to sort out. And poor old Little Inchy’s Fungal Lesion needed a lot of attention and cleaning up as well.

Glad I had the medications needed.

My being a bit of an eccedentesiast, I found I was singing to me as I made my way to the kitchen, to get the Health Checks done.

Made the tastiest brew of the Olde English Breakfast Tea.

The Sys is coming down a bit. The calefaction of the temperature seems to be steadier recently.

Then started to finalise the Thursday post. Went to make another mug of tea. I cleaned up some medicine bottles that had been used up. Washed the tablet containers that were empty. 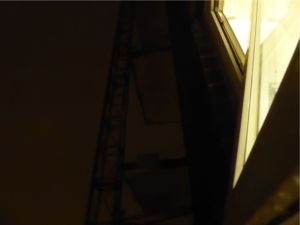 Took this photograph (above left), from the kitchen window, of the rainy scene below on Chestnut Walk.

Somehow, I took this extra one unknowingly until I found it on the SD card. I’m not even sure what it was I photographed.

I assume I clicked it going in or out of the window? Good news is, I took it facing upwards, it shows the noisy Herbert above was not up, no light showing from his flat. I thought it was quiet.

Had a wee-wee, then made another small mug of tea. The Assam blend this time.

Sorted some rubbish and recycling bags out and out them with the medicine bottles, to go in the glass bin later.

Back to the computer and did some WordPress comment reading and replies. I seem to be jumping between tasks this morning?

Back to the kitchen to replace the tea that had gone cold.

I settled the camera on the window ledge to take this shot, as Shaking Shaun was making his presence felt now.

Back to the computer.

Visited the WordPress reader to take a look at some other bloggers work. Some good stuff on there this morning. Made a few comments and liked some of them.

I tried on Facebooking. Slowly it let me post to the photo albums. Went on TFZer site, and it crawled to a halt! But only on Facebook? Grrr!

Off for another wee-wee.

Health Checks and tablets were taken.

I saw an advertisement for the 1962 film, ‘The Wrong Arm of the Law’ to be shown on Channel 81 on Freeview later today.

Tickled-pink at seeing this. One of my all-time favourite comedy films. With super actors: Peter Sellers, Bernard Cribbins and Lionel Jeffries. A trio of genius’s to me!

I thought I’d get some sleep in early so I can perhaps stay awake long enough to watch it. It’s those flipping commercials that send me off to kip so easily.

I decided to get the meal early too.

The same as yesterday was planned, well almost the identical.

Sliced apple, halved small red and yellow tomatoes, and another of the Cumberland Pies that I enjoyed so much in the fodder, yesterday. Added some mini BBQ meat skewers A lemon mousse, too and besides.

I drifted off into the land of Nod. Waking to the sound of Noisy Herbert banging about in the flat above. But I appreciated this, as it reminded me that the super-film was to start shortly. So I got the last Health Checks done early, the ablutions and made a brew, in time to settle down to enjoy the film.

I got through three-quarters of the film I think, before I dropped off to sleep, missing the ending of the film entirely. Most aggravating and annoying!

This brought a day of nothingness to an even sadder end.

I sat there, pondering on the things that needed doing. Not that it mattered, cause I fell asleep again and stayed like this for about five more hours!?!