0505hrs: Oh, what a terrible night. Nightmares and nice dream-ridden, waking so often and fretting, fearing and planning; The drain was in turmoil. The Doctors at 0905hrs, meaning I have to start the ablutions and medicating no later than 0705hrs and hope there are no ailments that need extra attention. Did I do a Morrison order or not? Little Inchies Lesion is a bit painful. The flat needs cleaning, but will I have the puissance or desire to do it; with all the mayhem, dust and noise. The promises of so much more to come as well. I assumed I had got up so late because it took me so long to get to sleep last night.

How will I find time to get these diaries done?

Chuffing heck! It’s already gone 0500hrs. Such a lot to get done. The mind was semi-concentrated and forced into a mock-cogent state when the demand for the use of the Porcelain Throne presented itself.

After yesterdays dirigible-shaped evacuations and multi-coloured content, now I have football shaped ones. But, minimal bleeding from Harold’s Haemorrhoids. The stomach started rumbling and grumbling afterwards? Washed and to the front room to turn on the computer before going to do the Health Checks.

I caught the view outside, and thought, ‘What a nice scene, I’ll photograph this! (Below left).

And promptly walked into the centre Ottoman on my way to get the camera! I believe I might just have used a naughty word.

By Jiminy, those shins of mine have taken a good battering over the years. Hehe! 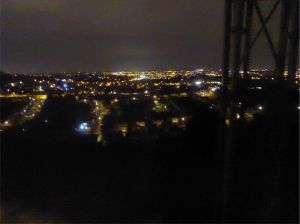 Applied some Germolene cream and got the photographicalisation done.

The unstoppable wild thoughts returned to my feeble mind again. Rampaging through some kinder emotions, was the terrible, desperate tones of depression and confusion. Making any sensible ideas dissipate from the equation of sanity.

I poddled to the kitchen and made a brew and did the Health Checks. 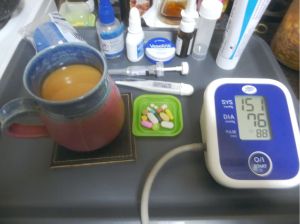 To the wet-room to do the sample, and the flipping lid cracked when I was closing it. Cleaned things up again. More time lost!

Took the medications and made sure that the INR DVT record card was in the jacket pocket.

I became aware that the laundry needed doing soon.

Nearly 0700hrs already, and so much more needed doing. Cleaning-up, this and yesterdays diaries doing, GUM Clinic to ring, INR blood test, black bags to sort out, get some Germoloid cream… but, I had to get the ablutions done first.

Ablutions all done. Got the black bags sorted and took them to the rubbish chute.

Got the glass bottles and jars in the bag. Then realised I’d missed the little bin bag, so added that in the carrier too. Took the new brolly with me.

Set off, with plenty of time to spare.

As I left the foyer entrance. I had to thread my way through, fencing and scaffolding to get to the glass recycling bin. Almost full it was. I think my Medicine bottle, Mushroom jar,  Soy sauce and Vinegar bottle were the only ones that had not had alcoholic contents. ‘Touch of jealousy, here? Hehe!’ 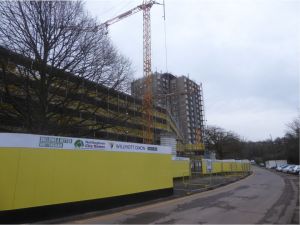 Took a photo of the new build and Winchester Court as I limped along to the end of Chestnut Walk, and right down Winchester Hill.

No rain yet as forecast. The weather was good, dry and not windy either.

As I passed by some house entrances half-way down the hill, I felt glad I didn’t live in some of them.

These ones (And many more of them), had six deep steps to manoeuvre to get into or out of their house.

On plodded on down and cut through the side streets onto Mansfield Road. Left up the hill 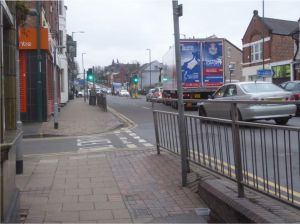 Apart from the feet, there was still no bother from any of the ailments. I often wonder why it is that I wake up in different states of health so often.

But I’m not complaining about it this day, mind you.

Over the brow of the hill and into Carrington and the Mapperley Hall Drive – Mansfield Road junction nearly produce an RTA for me to photograph. It often does this, for it is a nasty crossroad intersection for the drivers. It is used as part of a ‘Rat-Run’.

I limped on down to the surgery and entered the reception, and I was greeted with smiles and hellos this time. 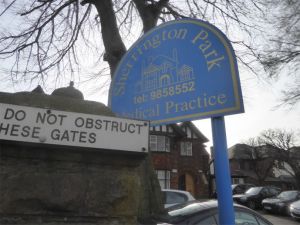 There were about twenty-five minutes to spare before the appointment. Blimey, I made it there in good time.

Having logged in, I got seated and worked on the crossword book.

Five minutes later the nurse came out and called my name. It was not Nice-Nurse Nichole or Arbeitsleiter Ann, but the new k Nurse. Who is as yet, to be granted a nickname by the old man, Inchcock. She seemed in a good mood this time, and made a little gossip of her own accord? I think Tim Price may be right, and I’ll take to her later.

There was little if any bleeding after she took the samples. This made me think that the INR DVT Warfarin level will come back as being rather low again. Not too small that I need the Enoxaparin injections, I hope.

All sorted out, I gave the nurse her nibbles and gave my farewells. Then realised that the small bag of rubbish, I had put in the bag to drop off at the chute with the others, was still in my carrier bag. I was so appreciative and surprised when the nurse took the bag and told me she would deposit in their bin for me. We seemed to be hitting it off now!

To the reception desk and I inquired about how I go about asking for the Doctor to add some Haemorrhoid Cream to my prescription list, without actually bothering with an appointment. Then I explained to the ladies, about the Germolene cream was such a relief for me to use. But with the cost so high.

The receptionist gave me a form to fill in. During which, my Doctor Vindla came into the reception area and out again. Donating a look to me, that spoke volumes, as she went by. 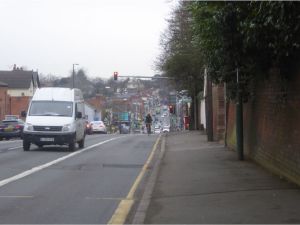 Like, “Huh, you again!” “What is he doing stood behind the reception desk?” and “Jumping Jehoshaphat, he’s still alive!” I can read her like-a-book, but she is straightforward and tells things how they are.

I love her to bits!

Handed the receptionists their nibble bag, and made my way out and started the long walk along Mansfield Road in the opposite direction this time, back to the flats. 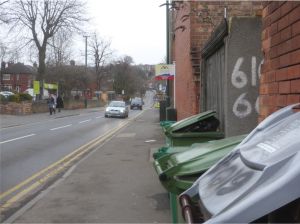 Up the hill and down into Sherwood. Turned right up Winchester Street Hill and Anne Gyna gave me some bother, a lot of problems. But, this is normal when I hobble up the hills, especially one as steep as this one.

As I stooped a few times to let Anne calm down, I realised how well I had done today, and this is the first time any real-hassle has been experienced on the walk. And, besides, as-well-as, what’s more, and also; I had not lost the umbrella! Haha!

The last burst of hard fought for energy got me up to the top and along Chestnut Walk to the Obergruppenfureress Wardens Temporary Shed and Winwood Social Meeting place. What a mouthful! Inside waiting for the first bus, were the beautiful Cindy. Maria and two male tenants. We had a little nattering session, I like Cindy, she has a sense of humour too. I offered my farewells and departed, continuing the last lap of on my way home to the apartment.

It had been only a short walk to and back from the surgery, compared to some I make now and then. Well sometimes. Er, occasionally. Alright, once a month or so! Haha!

Up to the flat, got in and had a wee-wee. Did the Health Checks and made a small mug of the Olde English Breakfast tea. I think they are on a par as my favourite ones along with Yorkshire tea bags.

Then the drilling sounds from outside, I assume the Willmott-Brown lads are doing either some windows or cladding work.

I got the computer on and carried on updating this post. (I must remember I have not finished yesterday’s yet, and do it afterwards!) I spotted a lady outside in the lower field, and my heart warmed. She had two dogs and boy, were they enjoying themselves. Another dog had left his or her own in the top field and came over to investigate the other dogs as the toyed with the lady as she threw the balls for them. You can see below, how nippy the little white dog was, the ball is coming down above his head, and he has a bead on it already. Seeing such fun and happiness rubbed off on me. I found myself going to make another mug of tea and singing to myself as I did so.

Got back on the computer, and started to update the Tuesday post. Finished this eventually, then returned to updating this one.

Got carried away with the email checking and reading. Put the oven on to warm up.

Went to the WordPress reader next.

Very late now, so I closed down and got the dinner prepared.

It felt a little odd, eating so early in the day, for me.

Not the best of meals I’ve ever prepared or eaten. Well, I didn’t eat anywhere near all of it. The main reason for this being that I overcooked the potato cakes with cheese on top. These reminded me of when Dad used to cut the leather for when he was mending his boots, belts and shoes. The frikadellen were alright, and the sugar-snap peas and mushrooms too. Everything else seemed to all have a repulsive taste? The stomach started ailing and grumbling when I was half-way through eating what bit I did.

I knew I was in for some Duodenal Donald confrontations soon, all the usual signs and pains indicated this. Huh!

Went to do the washing up, and the cloud formations and layout was astounding. I don’t relay ever seeing the clouds so layered if that’s the word. In fact, this reminded of when I had the mechanical ticker installed and came round in the Side CC ward, everything I looked at for a day or three, seemed layered similarly.

I suppose there will be some meteorological explanation for this.

There was a programme on the Goggle-box, about the Grenfell disaster, that I wanted to watch, but it was on at 2100hrs, well past my head-down time. But, I stayed awake to watch the preceding ‘Hustle’ episode, in about 60 to 190-minute parts! When the apartment fire survivors came on, I stubbornly continued to fall asleep and wake all the way through it. I hope it is shown again later, but earlier in the day.

I nodded off within seconds of the documentary ends.

Woke up later, with the innards in turmoil. I took some of the barely adequate antacid medicine and an extra painkiller. Despite the pain, I fell asleep again, and slept from then, for another three hours.

My EQ tells me I am going to suffer more physical and emotional pain tomorrow. I sometimes wish this curse of at the time of the test; having the highest EQ ever recorded in the UK, but lowest IQ, could be reversed.