0315hrs: I been laying there in the £300 second-hand recliner for about an hour. Half-awake, half-asleep, with the mind stewing, brewing, fretting, worrying and waiting for the brain and body to amalgamate into some form of a controllable unit.

The brain informed me that I was thirsty and fancied a mug of strong flavoured tea. The moment I moved my blubbery body to escape

Off to the kitchen to make a brew. I took this close-up photo of the morning view of the residential locale.

I made the brew, took the medications and took a good swig of the chimerically ineffective antacid medicine. The rumbling from the innards continued.

Updated the Wednesday diary, and got it posted. Visited the WordPress Reader site.

Made a start on this one. Remembered that the food delivery was coming twixt 0630 > 0730 hours. So limped to the wet room to do the ablutions and change into the day clothes.

All refreshed, invigorated (Might be pushing it a bit using these words, Hehe!), and smelling nice, now.

Made up the nibble box and put it in the bag with the raffle prizes and cream cakes.

The Morrison van due anytime now, a made another cuppa and did a search for suitable graphics to amend to use as page tops.

Ten minutes later the chap arrived with the groceries.

He kindly lugged them into the kitchen for me and was amazed at the mess left from the working installation fitting of the windows.

A grand bloke he was.

I got the things that were delivered stored away. Sacré bleu, had I gone potty and lost the plot with my ordering the fodder again!

And besides this lot in the pictures, there was stuff I’d already put away in the fridge, including three more Cumberland Pies. Oh, and for some unfathomable reason, I’d ordered more potato pancakes, and 3 packs of three kitchen towels!

There were some things I could just not remember ordering in there.

I had to take some things out of the freezer and dish them, to make room for the Brobdingnagian bag of chips.

I think I’ll take one of the ready meals to give as a raffle prize with the other stuff with me later, to the Winwood Social Shed Hour at the Temporary Obergruppenfureress Warden’s shed.

Back on the computer to update this post. Then I did a bit of prep work on the first of the Page Top Header graphics on CorelDraw and CorelPhotopaint.

An hour or so later, I got the bag and set off out to the Social Hour.

I ambled out and along Chestnut Walk to the shed. Entered and went in to talk to Obergruppenfhureress Warden Deana in her little HQ room. Had a laugh and while I was doing this, the mobile phone burst into life. T’was the Sherrington Park Surgery receptionist.

She also told me that Dr Vindla (With the twinkling eyes that drive a man crazy!) had put some Haemorrhoid cream through to the dentist, and I can collect them today. I thanked her.

A lady appeared who wanted to talk to Deana, so I withdrew, leaving the sourdough bread.

Into the central hall area, to find only around fifteen tenants in attendance. I offered my greetings openly to them all. Cindie and Jenny replied. Ah, well! I sought out Jenny, to hand her the two fresh-cream scones I’d got for her from Morrisons. She was reluctant to take them from me unless I allowed her to pay for them. But I genuinely did not know what they cost.

Welsh Bill was feeling a lot better today and distributed a sarky, put-down and a direct insult in my direction. So glad he was getting back to his usual mode.

Cindie was in fine form. She led the gang in singing for a ladies happy-birthday song.

BBJ was his usual sneering, superior snotty self.

I put the readymade meal in the fridge and explained to raffle-organiser Frank, what I had done.

I got seated next to Bill (William on Sundays) and Lucky Pete. (He won about six raffle prizes again today). Good for him. They helped me with the crossword this week, but they were not as good as the pair are normal. Hehe!

Although few of us there, we all, (Apart from BBJ, but you can never tell with him, he never smile, but does occasionally give out a worrying sneer) seemed to enjoy ourselves.

I made sure I gave them all a cheery farewell, and four of them replied. Not BBJ, of

I set out on my walk down to Sherwood, to catch a bus into Carrington and call at the Pharmacy.

At the corner of Chestnut Walk and Winchester Street, I held the camera over the top of one of the fences and blindly took a photograph, not knowing at the time how it would come out or what would be in it.

Turned out a decentish picture, I thought. A little further down the hill, I took a snap near the bend in the road – then tried to hold the camera in a steady grip and same position, and zoomed into the cloud formations near the centre of the photograph, and took another one.

This formation type I think, (I looked them up on the internet), are called Mammatus. Similar to the last nights.

Plodded down the hill to Mansfield Road and caught a bus for the four stops, and dropped off in Carrington. Cor blimey, I love my free pensioners bus-pass!

Waddled over the pelican-crossing and down to the Carrington Pharmacy.

It was so sad to see that a row of six retailers, had all closed-down now. Although I wasn’t exactly surprised, with there being not a soul in sight! But it did leave in a eulogistical mood.

A new chap served me today, he seemed patient with me. His facial features reminded me of the owner, the helpful Deepak. He got the extra haemorrhoid cream prescription for me. I inquired when the monthly ones would be ready for me to collect. He unabatingly looked this up on his computer for me and advised me that it would be available for collection on Friday, April 6th. I thanked him and wrote this date down on the packet of the ointment, so I could add this to the diaries when I get home. Confident I would not forget this time! Oy vey?

I thanked him and left, going to the bus stop to wait for a free bus-ride back into Sherwood.  The vehicle was well packed with passengers. I had to use one of the low down, side-saddle seats. Which caused me some difficulty in getting back up perpendicular again, Hehe!
Howbeit, the driver, was very patient with waiting for me to get up to get off the bus.

Crossed the road and up the hill to the L9 bus stop. Where Roy from the flats was waiting. We had a laugh and chinwag or two. When we got on the bus, there was Mary on her way home, with a large plastic storage bin. The driver was the lovely lady again. I slipped her a Wagon Wheel, I know she likes them.

Up at the flats again, and I asked Mary as we walked along Chestnut Walk if I could help her with carrying the plastic bin. No, she said no, it’s dead-light. We had a natter and parted when she got off on the 7th floor.

Into the apartment and had a wee-wee. Put the cream away in the wet room.

Got the computer on and added the dates to the Google Calendar and the written diary for the next appointment for a blood test and the prescription pick-up day.

Started to update this post. Three hours later, I got up to here on this dairy.

Got the oven on heating up, and the cheese put onto the potato cakes. I hope to keep a keener eye these this time, and not let them burn! Got the mushrooms sliced and in the saucepan simmering with fish sauce and wine vinegar added to the water. Fingers crossed they taste alright. 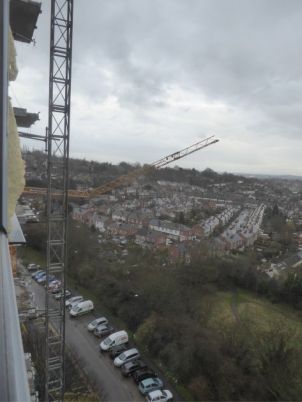 I took this photograph out of the window in the flat.

Although I thought it was a decentish outcome as it turned out, some bits of it made me recall what is yet to come in the upgrading work. How I made some of the links is uncertain:

The foam sticking out of the unfinished outer window frame: Made me think of the balcony window frame, with its massive holes and the inside of the outer wall revealing its pebble filled contents. The dust, the noise of the work, the curtains ruined and not rehung.

The holes in the kitchen floor and wall they left me with after they installed the heater too close to the cabinet and drawer and I could not open or use them, and they moved the heater.

Those horrible window ledges outside that now prevent me from taking pictures of the roadway below.

The cranes, reminding me of the new block of a brand new extra care apartments and facilities being built for the new tenants, with a rooftop relaxation area.

My EQ told me things will not go well.

The fretting over wondering if I will live long enough to see the project completed. We’ve lost a lot of residents since the works began.

Did the Health Checks and had a wee-wee.

I regained some degree of sanity and got the pan in the oven and stayed in there watching the fodder cook.

Checking the cheese covered potato scones, and my hand came out of the oven with some melted cheese stuck to the fingertip. Digit under the cold tap dried it, and Germolene applied.

Got the meal on the tin plate, added two buttered slices of the Lancashire Thorough Bread and a pot of the Lemon Mousse.

My eyes bigger than my belly: so didn’t eat it all. But I enjoyed what I did consume. Felt a bit guilty about putting too much butter on the bread.

I went into the kitchen to wash the pots and

realised I’d left the plate and tray on the Ottoman in the other room.

I watched as the cars below with their lights on in the drizzle made their way home. For a while, this prompted a touch of self-pity that I can no longer legally drive a vehicle. This lasted only a few seconds.

Had a wee-wee, changed into the night-attire and got down on the £300 second-hand recliner to watch some TV.

As I lay there waiting for sleep to arrive and take over my thoughts, I felt my legs were so cold.

Then realised what a schlemiel I was, and felt a right Bozzo. I’d gone in the wet room to change into the jammies, and had taken off the trousers, washed and put the trousers back on again!