(0057hrs) But updated to BST 0157hrs: Woke up coughing and sneezing, in a right state. Shaking and shivering for a few minutes. But as the brain engaged with the body thongs returned to normal and there were no signs of sniffles, coughs or sneezes? Had I dreamt this?

With surprising agility, I was out of the £300 second-hand recliner and into the wet room. Had a wee-wee. Inchies small lesion was tended to, cleaned up, and the PPs were changed. I changed the big clock on the fireplace. Then the one in the kitchen and the one near the computer.

Back to the kitchen, via the wet room for another wee-wee, and got the Health Checks done and medications were taken. Made up the listings for the Haematology Anticoagulation & Deep Vein Thrombosis unit.

Updated the Sunday post and got it posted off. A few comments read, appreciated and replied to. Then I went on to the Reader page.

The coughing and sneezing seem to be coming in short little bursts. After a minute or two, I seem to be back to normal, then sometime later, another round starts again? Very odd.

I put on a 1.5hr YouTube Chernoble documentary and watch it all the way through. Why? I’ve no idea.

Ablutions were tackled, medicationalisationing taking the most time. Thank heavens, for the efficient but expensive Germoloid Cream! Hehe!

still being on, to take a photo of down below to my left. Had to get the camera-strap on the right wrist and thread both hands, one in each break, through the narrow gaps and stick my hands out as far as they would go, then look through the glass at the screen on the back of the Panasonic Lumix. I clouted the left wrist and the right knuckles threading the limbs back in between the plastic covered security-wires!

This served me right! My own silly fault. Especially after saying I would not take any more low photographs from the kitchen window again, because it is too complicated and risky to get out safely with the camera, and hitting my head twice yesterday morning, doing it then! I am a nincompoop! 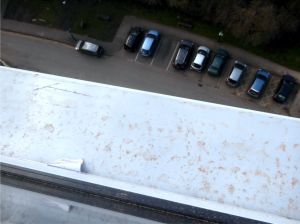 And, also, as-well-as and besides; Can you see the dirty-great window shelves sticking out? The one on my windows is filthy with red dust, bird poo and large deep, dirt filled scratches on it already! But, the worst thing is it blocks the views. Very disappointing, another annoyance, aggravation, bedevilment, bug, vexation, exasperation, frustration, irritation and nuisance. Kindly implemented from the well-intentioned caring Nottingham City Homes and the well paid Willmott-Brown conglomerates, tour de force.

To irritate me more, there is knocking coming now from BBJ (Big Bad John) above. Frown!

I shouldn’t moan really at all. However, the niggles, appointment changes, workmen not arriving when they say they will, changes they make at short notice, the dirt and mess, the noise, the missed… Oh, sorry. I’m bleating, blathering and babbling on again!

Got dressed and made sure the black bags were sorted and placed near the door so I didn’t forget to take them to the chute with me on the way down when I went out.

All ready to go out, and a final double check on the taps, lights, computer, TV, windows, heaters, cooker and crock-pot to make sure I’d not left anything on. And off I went, dropped the bags down the chute, and into the lift. Stood there with my demented mind running off to its own thoughts, fears and frustrations.

It was a couple of minutes before I realised I’d not pressed the button for the ground floor. Tut-tut!

Out onto Chestnut Walk on my way to the OBergrippenfhureress Wardens Temporary HQ and Social Shed; I stopped to take this picture of Woodthorpe Court.

I didn’t see any tenants all the way to the hut. This seemed almost strange to me. Plenty of workmen milling about, though.

Got inside the hut and offered a cheery Good Morning to the wardens in the little room. Only three tenants in there. Plenty more outside at the bus stop, smokers I assume.

I was a little worried about Welsh Bill, mind. He looked fine and chatted well. But there was not a single insult, put-down or sarcastic comment thrown in my direction from him. I hope he is alright.

Out to the bus stop, with now at least 24 residents in the queue. The young gal from the residential home at the end of Chestnut Walk was in the line, and she made her way to me for a gossip, bless her cotton socks. She has lost some weight, and that is not good. I handed her a Tunnock chocolate caramel bar to nibble later. The poor gal suffers from Anorexia Nervosa and is Autistic. Many others do not understand at all and tend to treat her as if she is backward. This is why I always try to talk to her, but more importantly, to listen to her.

As it happens, we were both going to Arnold. So we sat next to each other on the L9 bus. I listened to whatever she wanted to tell me, and with genuine interest too, that is essential I think. Learnt about her Mother and her problems and her Sister also. I tried to encourage her gently, to nibble more.

We offered each other our farewells as she got off a few stops before I did. I hobbled into the Asda (Walmart) store and began a major-food-buying mission. Haha! No rush, but I kept looking at the time though, so as not miss the L9 bus back home, at 1115hrs.

The feet were stinging after half-an-hour of selecting fodder, but I carried on all the same. Got to the checkout and joined the queue. I filled up one bag and had to use another.

When the young lady told me how much it was to pay, I realised I had gone over-the-top on spending today.

I had to use my card to pay them with. What a Plonka!

I thanked the lady and made my way out of the shop.

Before I even go outside, I had to stop and put the bags down, for a breather.

So heavy were the things I’d bought

At least I’d packed the heavy stuff at the bottom of the bags, so nothing got crushed or broken.

I felt a touch of guiltiness at having purchased the Fresh Cream French Horns. (Amongst other

I struggled to get to the bus stop, due to the weight of my bags-full of not-needed foodstuffs. Tsk!

But, Hippy Hilda and Arthur Itis were both being kind to me. Only Anne Gyna and the plates-of-meat were any real hassles. So, no complaints from me.

The automatic Asda petrol station that was over the road didn’t have a single customer all the ten minutes, or so, I waited for the arrival of the L9 bus. And, there was only one bloke apart from me, at the shelter?

The driveress of the bus was a friendly one. I gave the lady a nibble bar and said a few pleasant words to her when I got on.

I’d hoped that the girl from Residential Home might get on the bus en route, but she didn’t. Not many passengers were on the vehicle, but the driveress was chatting to some all the way back. With voices all going at the same time, I couldn’t hear what was being said nor join in the chinwagging. Shame.

No tenants got on in Sherwood either.

Back at the flats, and things got brighter, and the sky became a lovely shade of blue. So I took a couple of photos of my beloved if dirty, noisy and mayhem-ridden Woodthorpe flats.

Not many residents waiting for the bus either.

I think the workers were on there lunch-break because I could only see a few of them about.

I limped along to the apartments, having to stop a couple of times to put the bags down en route. A poor old thing, me. Hehehe!

In the lift foyer, and I spotted an addition to the sign about an upcoming meeting. So, we have a meeting about the new CCTV-System, the new  Tannoy-System and the new Intercom-System! Jenny’s updating to guide us. More dust and mess on the way! Hey-Ho!

I’d love to go the meeting, but will I be able to hear anything being said, this time?

Up to the flat, and had a wee-wee, and got the Health Checks done. Sys back up high again?

I realised belatedly that I’d left the bags of shopping in the hall. So got them into the kitchen and somehow managed to get everything into the cupboards, fridge and freezer. I was a bit chuffed about this.

I checked the till receipt to make sure everything was there, and I had not been swindled.

Mind you, I needn’t have, not like when I go to Lidl, then it is advisable to check things.

Well, I’ll be a monkey’s Uncle: Had I bought a lot or what!

I noticed I’d got the numbers wrong on the list above. Plainly, further reassurance of my lack of concentration?

Made a brew and started to update this blog, got up to here.

The noises from the workmen and BBJ were getting to me. Humph!

I decided to have sandwiches tonight for the meal. Porkpie and buttered Cob bread with tomatoes sounded appealing to me. I put some mushrooms to simmer in the saucepan with some light soy sauce seasoning and sugar in the water. Try saying that when you’ve had a few! Haha! 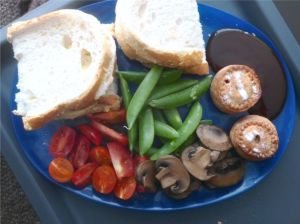 Did the last Health Checks, tool the medications, had a wee-wee and had a dizzy-spell while I was sat down. Cleare up quickly, though.

Went to get the nosh ready and served up.

This meal was followed with the digesting of the Fresh Cream French Horns. For once, I have to say I did not enjoy them much? But, I still gobbled them all up.

Went into the kitchen to wash the pots. The sky looked threatening, yet beautiful at the same time.

Had a bit of a dizzy while I was doing the pots. Tried to watch a DVD, and cannot recall much of what occurred after that.