0035hrs: Woke with the shivers. It was feeling so cold. And, I had the woolly hat on, too. I was in urgent need of a wee-wee and had to hurriedly abandon the warmth of the £300 second-hand recliner to get to the WC in time. Little Inchy’s lesion had been bleeding and needed some uncomfortable medical attention.

During which the brain did not seem to be following its own commands, malapropos-like, the actions taking place seemed almost like I was dreaming or imagining they were taking place. No, Whoopsiedangleplops, Accifauxpas or Fears occurred, just the realisation that suddenly everything clicked into place and it was them, I understood that they were not in situ in the first place. I made a mess of explaining that, but it’s the best I can manage at the moment, sorry. The codswallop and balderdash started affecting my thoughts and lingered on in the background.

Off to the kitchen and got the Health Checks done. 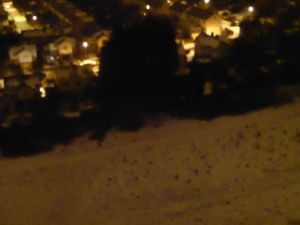 0110hrs: It felt well below freezing out there as I opened the window to have a check on the weather… well, the state of the snow and ice really.

No new snow had fallen at all. But the compressed snow and ice were twinkling threateningly for any walkers.

I gave my elbow one heck of crack in the window frame as I came back in after taking the photo. I think I may have said something like “Oh, blow it!”

At this stage, all sorts of ailments appeared almost in unison. (Hippy Hilda was nae-bother). The grumbling-rumbling innards and Duodenal Donald were the main culprits for my sudden decline in health. Reflux Roger occasionally joined in. And this is how things were for a long time, until the Porcelain Throne visit, anyway.

Made a brew and then onto the computer to start this post off up to here. Then finalised the Friday post.

Herbert from the flat above started his banging and knocking again.

Had a right funny-turn as I was getting the nosh sorted out. Did myself no-good at all. I had to stop everything and just sit down. I soon fell asleep and woke up many hours later, feeling as fit as a fiddle? Life can be very confusing.

The day had gone by now. But I must have needed the kip.

Got the meal served up. I had one of the Lamb Hotpots I bought from Aldi. And have to say, it was superb, flavoursome and filling. Plain Greek yoghourt with Maple Syrup, sliced Italian tomatoes the only sad part of the meal, bitter!) added, and a sliced apple with a large mug of Clementine Juice finished off this delightful repast.

I remembered I had not done next weeks Morrison order, so I got the computer on and did so.

I felt sure I’d be able, after so much sleep, to watch some TV, so settled down to view some.