0500hrs: Once again, a brain and body awoke in the £300 second-hand recliner; so dissimilar and remodelling compared to the one that went to bed last night. I’m finding it hard to recognise myself in the mornings lately. Hehe!

Anne Gyna, Duodenal Donald and Reflux Roger were both AWOL. More surprisingly, so was Belinda Blotches (Almost cleared up now), No bother (pain) from Hernia Harry or Hippy Hilda. 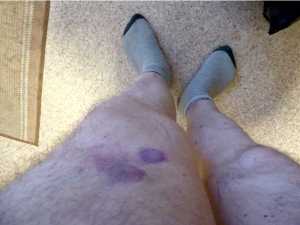 : The Whoopsie derived bruises, acquired last night from my walking naked, apart from my socks, into a left-opened door of the fast decomposing, disintegrating hardwood 1964 G-Plan cabinet, were still a bit tender.

Tne moment I moved to detach my lumbering body-mass from the recliner, I realised that my old friends Haemorrhoid Harold and Inchies fungal lesion were not being so kind to me. A hasty hobbling to the wet-room was needed post haste. Little Inchie had been bleeding, and it had dried (Ouch! Haha!), and Harold

had and was bleeding, and Diahorrea Donald was in total control of the evacuation process. Tsk!

Cleaned up, I made my way to the kitchen to get the Health Checks done, and medications were taken.

Got the results recorded and into the front room to update last weeks Excel sheets to take with me to the Doctors. Then realised I was going to the hospital this week, cause the

surgery have not made me an appointment again. Fancy that! Azoy gait es!

Got next weeks dosage pots made up, which reminded me, I must get to the chemist today. I’ll go after FootLady Sue has done my tootsies I Think.

Back to the computer and started this blog going up to here. Then finished off yesterdays diary and sent it off.

But of course, I am not complaining, just mentioning it. No point in my risking Nottingham City Homes upset for moaning about their favourite tenant making a noise. As the Management, told me; He is doing nothing wrong, just following his hobby of model making. “You’ll have to put up with it!” I don’t want to lose my home. I’d better cross it out.

I’d better get the ablutions done now so I can have everything ready, just in case FootLady Sue arrives early.

Teggies done, shaved, extremities cleaned, then a long shower. Followed with some rather harrowing medicationalisationing of the lesion. Creamed Harold’s Haemorrhoids. Sprayed the torso and legs with antiperspirant.

To the kitchen to sort the bags out. Heck of a loud, long grinding noise emanated from somewhere. No idea, where, though. Sounded very close.

: Got three black bags made and tied-up. Before they reduced the size of the rubbish chute entry point, it would have taken one bag. Took these out along with a recycling bag. Dropped the black ones down the waster funnel and took the Orange bag down and to the caretaker’s door, where some others had left their filled recycle-bags, and some naughty pensioners had dumped other household items and loose rubbish. 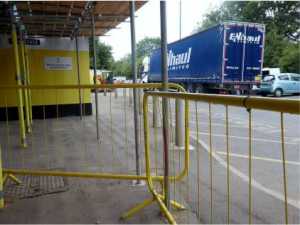 All ready for Sue to arrive now. I did a bit more work on the TFZer graphics.

I took the bags down and nipped out to take this picture of Chestnut Walk, outside the foyer doors.

Through the maze of barriers and to the left, you will find the Caretaker’s door.

Didn’t see anyone that I could talk to.

Back up to the apartment and on the computer to update this load of tosh.

Ah! One of the smaller hoists came up by the window. I think this might be what the noise was earlier.

The intercom chimed up: it was FootLady Sue arriving.

She set about sorting the tootsies out for me. Nice chinwag.

I made up an Iceland order and then set off on a hobble to the chemists for my prescriptions.

Set out to the Chemists. Met some residents in the foyer, Mo, Jenny and Frank.

Walked to the bus stop with them and I joined a few others already there, and some very welcome laughter and no-pressure chinwagging took place.

The place had come alive now, and with we pensioners, all agreed, that we want to stay alive and uninjured, the three of us should take extra care manoeuvering on the car park or road to get to the bus. Already!

Caught the bus down Winchester Street Hill to Mansfield Road.

Went to the bus stop near the old bus depot, and found it had been decorated with some classic Nottingham Street Art.

I became aware that this is the bus stop that some youth was stabbed in, and last year an 88-year-old woman was attacked at 1000hrs in the morning on this spot!

I was soon in Carrington and made my way to the chemist and collected the prescriptions. Then

made my way to the Lidl store to be insulted, sneered at and looked down upon.

: They changed tactics today and caught me out.

Instead of the curled lips and looking at me as if I was dog-poo on their shoes, they just ignored me entirely. Cunning move on their part. Haha!

I paid the £9.16 for the tomatoes, still lemon & lime water, mint chocolate ice-cream cones, mini-Cumberland sausages, two bread mini-rolls and a packet of battered, seasoned potato slices. Caught the bus back into Sherwood and got to the bus stop at the top of the hill.

A couple of Woodthorpe residents were waiting there.

One, the lovely lady sat here in this picture with her white sun-bonnet on her head. She lives on the first floor and seems to be a pleasant natured lady. But she was telling me of her medical problems – they put my pathetic ailments to shame. Bless her!

She is the lady who shared her views and thoughts on the new kitchen windows with me the other week. We are both so soundly disappointed in losing the light and perspective, as well as having so many extra windows to clean when the new balconies are fitted.

Ended up with Roy, Dot and lady in the hat and me, walking together from the bus to the Woodthorpe Court, myself. They were a little 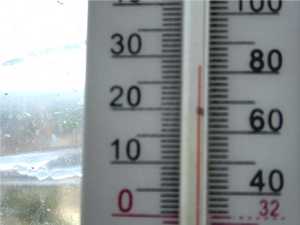 too nippy for me to hear what they were saying to each other in front of me, but the good thing is they were laughing. The bags with the weight of the shopping and prescriptions had weighed me down I think.

Up and back in the flat, the overbearing heat of late did not hit like it did yesterday when I opened the door. But it felt far hotter out and about this morning. Indeed the thermometer showed the heat had dropped a good bit.

I got the bag from the chemist out on the counter.

And without dropping any as well. (Smug mode Adopted here! Hahaha!).

I got them out of the flimsy paper bag and spread them out so I could determine if any were missing this month, like last month and the month before. That Chemist is going off me I think? Hehe!

I was utterly unmiffed or surprised when I realised that one of the products was missing, not there and absent.

: There was no Anusol Cream for my Harold Haemorrhoid problem.

I thought at first that I had shown great stoicism at this happening befalling me.

Then I wondered if stoicism was the right word – I’ll have to look it up later. Tsk!

I packed the boxes and bottles into there allotted places.

This means another trip has to be made to the damned chemist to make things right – just like last month and the one before – Another Durkhfal!

: I trapped my finger in the drawer as I closed it shut after storing away the medications. I think I may have said something along the lines of “Well fancy that!” at the time.

I was determined not to allow myself to become tristifical over this being let down again for the third time, by the pharmacist.

Put the fodder away and made a start on updating this post.

Got the nosh started, seasoned sliced potatoes in the oven. Sliced the tomatoes on the plastic plate.

Did the health checks and took the evening medications.

Considering that I had used the buses today and not got a decent hobble in at all, I was feeling well-tired-out.

I got the nosh sorted and served up.

A much-improved effort this time. A deserved 8/10 for Flavour Rating. The mini Cumberland sausages were tasty. Only the tomatoes let the meal down, they were a bit bland. The onion salt was used to spice them up a little. The mature cheddar cheese, excellent! The sliced seasoned potatoes were alright.

I planned the TV viewing, cause I felt confident that the sleep that has resisted me for several nights now would play-up again. The now customary nodding-off and waking-up again continued, with me being confused a few times and thinking it was time to get up. Humph!