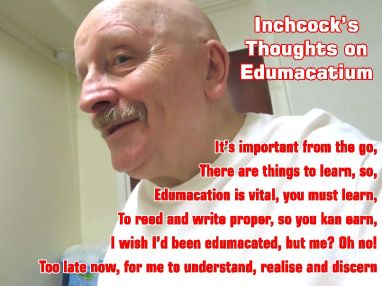 23:30hrs; I woke in need of a wee-wee. The general performance in getting out of the £300, c1968, mind-blowingly crude beige-coloured, rickety recliner, was more comfortable than it has been for months. The ailments must have still been asleep! Haha! So good and pain-free was I, that I didn’t use the stick to get to the grey plastic wee-wee bucket at all!

However, unfortunately, the passing was of the UWBUS (Ultra-Weak-But-Uncontrollable-Sprinkly) version. I think I prefer the power-blast type, at least I know when things are finished. Hence, the first job was to clean and sanitise the bucket and me and change my PP’s. (Disesteem-Mode-Engaged!)

It felt very nippy this morning. The new unwanted kitchen windows were steamed up inside and moist on the outside? I put the dressing gown on.

I moved the hanging handwashing to the stand-up airer.

Then the need for another wee-wee arrived. Aha, I was cunning. I decided to use the sit-upon Throne this time. But things were not the same as the last wee-wee. (I should be so lucky!) This was an ELPSOA (Extra-Long-Powerful-Spraying-Out-Allover) wee-wee. The blast-back soaked things that should not have been soaked! I had to clean up the floor, cabinets, sink and myself! Such was the force of the spraying! How things can change like this, is beyond my understanding? Bending down did me no good, and started Anne Gyna off. Galumph! But, it did make me aware that the stomach had bloated a lot overnight, and had gained a few extra marks. There appear to be some new spots taking hold as well. At the bottom of the heart op scars. It could have been how I was laying in the gungy rusty-recliner, perhaps? 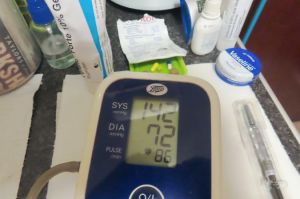 I retrieved the hemadynamometer from the medical drawer and failed three times to get the machine to operate. Got it to go on the fourth attempt, though, and with fair results again too. Sia 142, Dia 72, Pulse 86.

However, the body temperature was still very low, I thought, at 34°c. I must mention this on Monday when I go to the surgery for the annual CHD test, the extra CBC and the Lipid assessment test. A Shame that Lipid can’t be quoted in an acronym form, I could have made a hat-trick there! Hahaha!

That got me thinking, where the term hat-trick came from. So I looked it up on Google: The term originated in cricket during 1879, where it refers to three wickets taken by a bowler in three consecutive balls, traditionally rewarded with the presentation of a hat. No charge for this information! Financial Donations gladly accepted, though. Hehehe!

I made a start on the updating of the Friday post. It was a long slog, with the finger ends playing up and not recording anything they touched to the brain! Then…

Making progress decelerated even more! The damned operation of updating and getting it posted off to WordPress, took me over five hours! It was daylight by the time I’d completed it! Misty in the distance mind.

Liberty-Global Virgin Media Internet then decided it would start to die occasionally on me! Progress fluctuated between a dead stop, and frustratingly sluggish! Ah, it’s weekend again! See how clever I was to spot that? Sad really!

I tried doing a defrag on Norton, they now call it a clean-up apparently. It performed this in about three seconds? Then I tried uploading another photo on WordPress. But no luck, it wouldn’t/didn’t have it. Oh, Globstagglefunk!

I looked up how to do a defrag. Chose all three drive options, including the massive old external Passport drive I use, and it started defragging. The first two drives took all of three seconds to do. The Passport cleaning was about ten minutes. As I recall from years ago, the defragging took ages and yonks?

I tried uploading the photo again. It took it but struggled, and it cost about five minutes to go on.

Hello, the Porcelain Throne beckons. Back in a bit…

Well, that was different, in the extreme! The first shock that tool some comprehending was the lack of pain. Then the softness. Then the flow stopping with what was obviously a lot more to come yet? I expect to be trotting back to the Throne again soon.

Washing my hands after the evacuation of sorts, and the right arm had a mini-session of directing an orchestra! It was over within 30 seconds and back to normal as it can be. But I still had to dry the floor and my torso and legs of the splashed water from the sink. Ah, well!

I was doing alright, really. With the computer, Virgin Media Internet, no one to socialise with, the leg and arm playing up, and the Throne changes; I feel I’m doing satisfactorily in the megrims and endogenous depression departments. I hope the computer problems don’t get too much and beyond me, that would do me no good!

I was doing well with the aberrancies, instabilities, Whoopsiedangleplops, annoyances and vagaries of the day, I thought.

Then, out of the blue, came an alarming weariness and a general, but definite disequilibriumness. A vertiginousness, a wooziness, that took over the body and mind. I don’t mind telling you, it shook me up, coming on so suddenly, in the twinkling of an eye.

I sat still in the chair for ten minutes to recover, but this didn’t work. I assumed lack of food for so long might be part of the cause, and got the fodder cooked prepared and served up. (Bulimia?)

I made the easiest to cook meal that I could. The vegetarian chilli, and heated the last sourdough bread. Another worrying factor to consider, was, is my abstemiousness for food on the wane?

Half-way through the nosh, I had to go to the Porcelain Throne. A failure, though, all wind. Washed and returned to the meal, the, oh, so too big a bowl of, of Soulful pulled jackfruit, smokey BBQ chilli with beans. ‘A scrumptious chunky chilli with chipotle and pumpkin seeds’ – with the black bean sauce and orange tomatoes that I had added to it. Could this be comfort eating?

I finished the, to me, delectable, delicious, dinner. After I’d washed the pots and took the evening medications, I still felt unsteady, weak, and so tired now.

But sleep refused to come. My mind, sort of went into a lull, pause, or respite mode. I put on the TV, but didn’t even watch it properly, it was just company of sorts, while the mind stewed in turmoil, and the stomach stung, and Anne Gyna stabbed away at me. 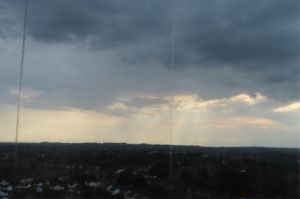 I gave up on sleeping. I’ve no idea why, but I got up and went to the balcony, and took a shot of the evening sky through the windows.

The odd tap-tapping noise started again. It might have been pipework perhaps?

Off I trudged to the Porcelain Throne once more. Aha! Movement. Sloppy and messy, a little bleeding, and not a lot of evacuated material this time.

A good wash then did the teggies, and back to the second-hand, £300, c1968, horrendous beige-coloured, tatty, rickety recliner, determined to get some sleep.

Huh! I lay there for over an hour or so before the blessed kip arrived. But during this time, the tummy and Anne Gyna both calmed down.