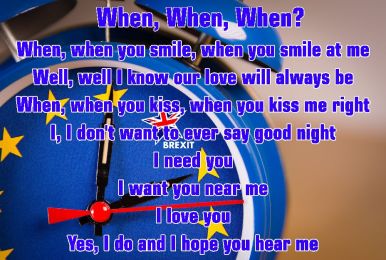 02:10hrs: I woke, and had to free my horrendously ever-growing ever more significantly-sized wobbly-body from the £300, second-hand, none-working-at-the-moment, painfully off-putting beige-coloured, c1968, rickety recliner, for a wee-wee. Gained my balance, grabbed the stick and to the good old (empty) EGPWWB (Emergency Grey Plastic Wee-Wee Bucket).

The wee-wee style was of the IDKWIB (I-don’t-know-why-I-bothered) mode. Never has so little been evacuated, resulting in such effort, patience, and pain! Urgh! Argh! And ten minutes later, a two-second dribble! Huh! 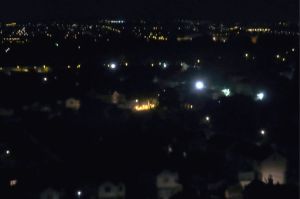 I must crack on today, the Doctors appointment at 08:50hrs, and Health Centre at 11:00hrs and some bread and tomatoes to be bought while I’m out.

The view from the kitchen window was a good one this morning.

The BP machine and thermometer were not having it again! I took the medications and made a brew.

I got the handwashing done and hung to dry. Then the summoning from the innards to attend the Porcelain Throne arrived. A messy evacuation, but not so painful. Washed the hands, the none-quivering hands, I might add. (Oh, yes, Smugmess Mode Adopted!) 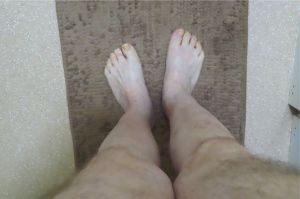 The whole body looked extremely anaemic and cadaverous, it fair shocked me. Especially as I was feeling a lot stabler healthwise, in myself this morning?

Still, the pot marks and papsules seemed to be clearing up? Even the spider-veins were not showing up as much as vividly as they usually do. But that might be due to the current anaemicalness. I must mention this and show this picture to the Doctor this morning.

As I was just about to start updating yesterday’s blog, I had to hasten to the wet room for a sudden wee-wee. What a difference with this one! An unexpected, catching me unawares, LPSS (Long-Powerfull-Stinging-Splashingback) version! Another mess to clean-up! Humph! It was a good job I didn’t use the bucket this time, else it may well have been blasted out of my hand! Hehehe!

Back to the computer and got the finalisationing done to Sunday’s diary. Posted it off. Then went on the WordPress Reader. Made a start on this blog.

An hour or so later: I got the ablutions done.

But at a cost! Tsk! Not exactly a good session, injury-wise, today. Oy Yay!

Readied things for the hobble to the surgery. It was too early to take the waste bags to the chute.

I set off out, down the elevator and out on to Chestnut Way. A worrying sight outside Winchester Court had me fretting a bit. As I drew level, ambulancemen came out, with a meat-trolley, but thankfully, no one was on it. Fingers crossed.

The dang white Mercedes van was still there in the same place, parked up on the Winchester Street Hill pavement. I had to go out onto the road again to get around it. Tsk!

The walk down the incline was most pleasant weather-wise. Not too windy, sunny or any rain affected the hobble into Carrington.

On Mansfield Road, it seemed like a Nottinghamian’s Pavement Cyclists Heaven today. I’ve put photographs together, to show the naughty people all in one place.

I arrived with plenty of time to spare and logged in with the receptionist. I had a bash at the crossword book. Got some in on puzzled I keep going back to. Swank-Mode-Engaged!

Dr Vindla came into the waiting area and summoned me to her surgery. She asked me what the problem was. I told her that Nurse Ann had made the appointment about my NCH medical results from last week. “Ah, yes!” When did you last have a fall? ‘Over a week ago, I’m doing better now!’ Well, that’s hardly encouraging, is it? ‘Well, no!’ – she had a check of the lungs, and I mentioned the whiteness of the body this morning. Writing on the computer. You’ll need more blood tests, make an appointment when you leave! ‘Okay, thanks’. That’s it! ‘Thank you’. I departed and made the appointment with the receptionist. Who, knowing me, wrote the date and time down for me,  (Tuesday 20th August 07:30hrs) and told me not to lose it! I gave her

some nibbles and made my way to the Lidl store, as I had plenty of time before the Sherwood Health Clinic appointment.

I left the store with some Scarlet Tomatoes, Mayonaise and some chicken drumsticks. I caught the bus back to Sherwood. Where the pavement cyclist almost hit me as I got off of the bus. Swine! 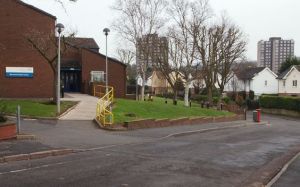 I crossed over at the Pelican lights and made my way to the Sherwood Health Centre.

Where a different young lady this time, took the note from me, and gave me a sympathetic look, as she explained that the appointment is for September, not August! She kindly did not sneer or look at, nor deal with me in a demeaning way at all! Bless her!

I asked if I could book an appointment with the paediatrician. Which made her laugh out loud, as she said; “I take it you mean the Podiatrist, my dear?” Even I had a sneaky smile when I realised what I had said, well, when she told me what I said! Hehehe! She phoned them for me, and she’d soon got me weighed up, as she wrote the much in the distance time and date on the doctor’s appointment card for me. Wednesday, 11th September! Blimey, my toes need cutting now! I thanked her and departed, to leave her to tell others of my faux pas, no doubt. Haha! I know I would have!

I hobbled back into Sherwood and called in the Wilko shop. I got a bottle of liquid soap-flakes and a bottle of bleach.

Then made my way up the hill, over the crest and down into the Woodthorpe Grange Park. Where I had a long, slow walk through up the hill. 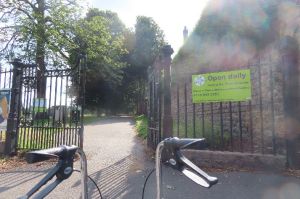 While frequently stopping to view and admire the greenery, trees, and watch the many dogs taking their owners for a walk. Haha! I haven’t felt so contended in a long time. Just watching the pets and frondescence, plants, magnificent old trees, shrubbery, flowers, brambles, petiole, and shin-tangles, was a pleasure for me. Even the Pavement Cyclist didn’t get to me this time. 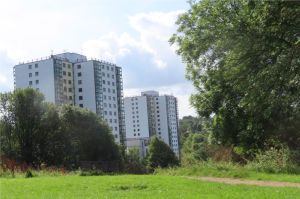 I was in no rush, I was happy. When I got to the top and turned right onto the gravel hill path, and Winwood Heights came into view, I wondered and hoped that no resident had taken poor;y earlier, or worse.

I painstakingly made my way down the footpath. The three-wheel trolley-guide does not like going downhill at all. Controlling the thing can get a bit dodgy at time. But not today, I got to the bottom without any mishaps at all. Even the idiot who drove her little black car at such speed to the end garages area did not get to me either! I was getting a bit worried about all this contentment, it’s not natural for me!

I got in and up to the flat without seeing a soul. But that is not unusual. I got in and put the bits I’d bought while out away. Got on the computer and added the new appointments to the Google calendar.

I started updating this blog and went to make a brew. Suddenly and serendipitously, just out of the blue, my general outlook on life returned. The doubts, fears, worries, and fretting about everything stormed into my mind! Nothing was sacred! I even wondered if I’d bought the mayonnaise in error and should have got something else to go on Josie’s fish? I couldn’t get it clear in my head. So much so, I called at Josie’s to ask her if it was Mayonaise that she said went well with her Tuna fish. It was, thankfully, the right stuff. We had a little natter, and I felt a fool for having to ask. I thanked her.

Back to doing the blogging. Time to get the fodder cooking. I got some chips in the oven; I’ll add the beef pie later. 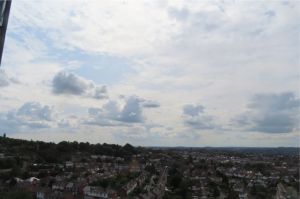 The EQ warned be that I must take care and concentrate? No other tips, though. The mind was still in a state of nervousness and worry.

While doing the cooking, I took and enjoyed perusing this nephelognosyer’s delight, photograph. I got the medications taken while waiting for the chips and beef pie to cook. 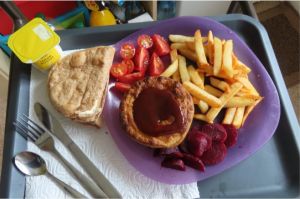 I stripped down to the PPs. I made some buttered wholemeal flatbreads and served up the nosh. It looked good, it smelt grand, and I was really enjoying it and watching Rumpole of the Bailey, as…

The door chimes rang out as I was eating! I put a seat cover around me, got the stick and answered the door. It was another Nottingham City Homes plumber! This chap had come to replace something on the cold water tank, that the chap came to replace yesterday, but a different part.

He spent ten-minutes examining things, and he asked me if I had a pair of step ladders he could use. I went out to look on the balcony for them – passing the steps on the way! He spotted them, and once more, I felt a right fool today! Hehe!

A cracking, possibly the most painful ever toe-stubbing against the swivel chair legs. Oh, the pain! It forced me into using a little unsavoury language, I’m afraid!

I tried to eat the rest of the meal, but things were cold and soggy by now. Humph! Threw it in the bin!

The gentleman got the job done. I thanked him, and off he trudged.

I found the stubbed-toe was the middle digit. Toes either side catching against the injury, meant I could not even wear my slippers. I was getting all fretfull again. And it soon started to turn black or blue on the second photograph.

Lucky; is perhaps not the best of words to describe me. Globdangerations!

It’s no wonder no one wants to come and visit me, it’s obviously the fear of catching and being affected by my infections, infirmities, maladies, contaminations, miasmas, issues, madness, contagions, disorders, afflictions, tribulations, ill-luck, contaminations, miasmas, septicity, anxiety disorder, timorousness, apprehensions, fears, septicity, and insecureness! And, I can’t blame them, either! Hehehe!

A harangued, pissed-off and had-enough Inchcock, then sat there doing nothing but mentally battling against the incoming Surface-to-Inchcock’s-Brain missiles, bringing forth sanity attacking worries, fears and a cruel demoralising acceptance of failure and distemperature, as the norm!

If anyone is training for a Doctorate (PhD or PsyD), who would like a challenging case to study, no charges either way! Can they please Email me. Haha!