03:20hrs: Strangely, I woke with a peace of mind, a serenity that has long been missing in my life. Not empirically, or egotistically, but heuristically, with far fewer worries and concerns belting about in the head! At the same time, the EQ warned me not to get too excited about this. But I could not help but feel a bit of self-satisfaction with this unanticipated phenomenon. Yet, it worried me at the same time!

As this odd new to me transformation, hopefully not a temporary one, sank in, the well-enveloped-in-flesh innards bubbled and rumbled, and I was out of the tatty, not-working £300, second-hand, recliner in seconds, and stumbling my way to the Porcelain Throne!

The evacuation was even faster than yesterday mornings. I swear it was all over within seconds, again! But still found time to be painful and messy! I cleaned up and changed PPs.

On the way out of the door, the new Intercom on the opposite wall lit up! There was no tune playing, and as you can see by this photo I took (the camera was in my dressing gown pocket), no one in sight?

And, this was about 0325hrs? When I got around to doing this post, I added a photograph from the intsruction pages given to 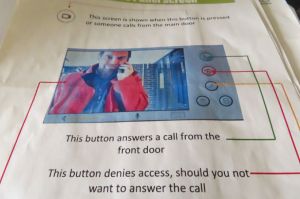 Baffling really, the different layout between the real thing and the instruction leaflet. Don’t you think? Highly suitable for the elderly to comprehend, fathom, grasp, discern, and work out? As if senility, decrepitude, infirmity, and dementia needed this sort of help! It’s bad enough that I am going to have to spend many hundreds of pounds out, for and thanks to the upgrading already done for us by Nottingham City Homes. New carpeting from the plasterer’s mayhem. The waste chute opening has been reduced in size, so now we all have to buy extra black bags to use. Holes left in the wall and floor to repair after moving the newly installed heater. These are the ones that Einstein would have difficulty in understanding how to set them! The wall and new electricity socket for the foam that was left to run down the wall and cover the electric-socket with rock-hard gel! The soaked-through and gone mouldy clothing that needs replacing, from the two repairs done to a leak! We, well I, do not need my mind attacking as well as my bank-balance!

By gum, I’m glad I got rid of that. Won’t make the slightest, smidgeon, modicum, or molecule of a difference of course. But better out than in! Hehehe!

I got the handwashing on the dryer, and some hung up, for drying.

I wondered how long I could manage without burning or breaking the two new saucepans? The expensive, ‘heavy’ one with the drain gaps at the sides, which I thought was pricey at the Special Price of £17.00, let alone the original £21.00, looks like it will be easier to use. The other (left) one with the standard lid has not been used yet.

Then, I got some fresh pod peas podded and into the old pan. Added a bit of demerara sugar and a splash of Balsamic vinegar. I used the last of the peas I got from the Arnold Market, and mostly the Morrison ones delivered yesterday. Oddly after adding the seasoning, some peas absorbed it, and other floated to the top staying the original green colour.

There is an apparent reason for this. But blowed if I know what it is!

I noticed that the blood papsules on the right hand had almost disappeared. Another of the mysteries of my beloved Woodthorpe Court. That lies somewhere between the twilight zone and a wormhole slipping through a tear in the fabric of space & the universal continuum. Illusion, delusion, & hallucination are rampant at Winwood Heights. That only those older residents living here can explain. Well, sort of! Hahaha!

I was a long haul, and I slogged away in getting the Wednesday post finalised. The late start and the slow internet connection was most frustrating. The arm, fingers, hands and shoulder were not too bad, although they had their moments! It was very late by the time it was finished. I got it posted off to WordPress.

I had a local news update email. This item was staggering:

Iraqi asylum seeker Qadir, 30, of Whitemoor Road, Nottingham admitted theft of toiletries and laundry products from Tesco Express on August 7; theft food and alcohol worth £358 from Lidl 13 days later. He also pleaded guilty to stealing shower gel worth £20 on May 30; toiletries valued at £40 on June 25; beauty products worth £60 on July 4; £90 worth of razors and toothbrushes on July 5; protein drinks worth £24 on July 9; Lynx shower gel worth £24 on July 11.

City magistrates ordered him to pay £100 compensation to Poundland and the same amount to supermarket chain Lidl. Well, that’ll scare him into honesty! Huh! He’ll be back, laughing again!

In Your Area Court Report.

I went to make another brew, before starting on this blog. I took a left, ahead and to the right shots of the view.

The sky was not so bright as yesterday. But the forecast for the Bank Holiday, in Nottingham is:

I’m hoping that the door mechanism that will let us out to sit in the sunshine on the bench is mended by Saturday. I can take a drink of spring water and orange and the crossword book out with me. Oh, and a cushion. The benches are made of slated wood. (Haemhorroids you know!) Haha!

It was well late in the day now. I’ve been missing doing the Facebooking, time so limited, so I decided to try and catch up – it’ll take me a long time though. Back in a while.

Blimey that took some time!

To much, too tasty and too guilty afterwards, but a flavour-rating of 9/10!

Washed the pots, and got down to watch some TV. Too much really, I just couldn’t nod off for ages.

When I did drop-off, I was awake and in near agony an hour later. The right knee, was being Arthur Itis’d to buggery! A new leg ulce had appeared, close the where the last one was situated. A cracking head-aches rounded off the waking misery! Tsk!

I did get back to kip though, as things settled down.

10 thoughts on “Inchcockski Today. Thursday 22nd August 2019: Great start to the day! Shame about the end!”