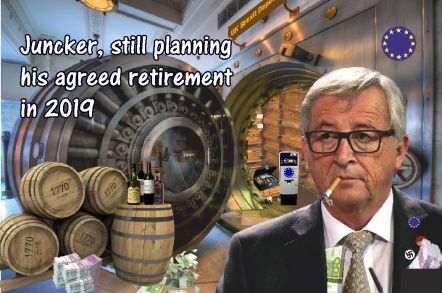 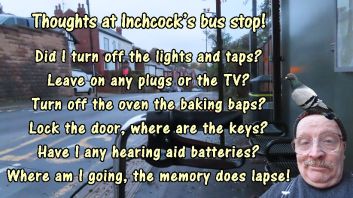 02:45hrs: I woke with Arthur Itis and Anne Gyna playing me up. But I had a strange determination to get the graphicationalisationing and templates done today.

Out of the Xyrophobia-suffering, flat breaking Brother-in-Law Pete damaged, while he was flat-sitting, when I was in the Stroke Ward, and he fitted new CCTC cameras, and searched for my valuables, which he found and took, (I still haven’t got them back yet five-months later), £300, second-hand, near-dilapidated, gungy-beige coloured, c1968, sometimes working, uncomfortable, rickety, rinky-dinked, rattling, rusty, resurrected, reconditioned, recalcitrant, recidivating and rotting-away recliner.

Had an LRWS (Long-Reluctant-Weak-Sprinkly) wee-wee in the GPEB (Grey-Plastic-Emergency Bucket), and off to the wet room. For a tremendously massive, reluctant painful evacuation. A spot of good luck here. I stood the 4-pronged walking stick nearby as I performed, and afterwards, when I rose, I knocked it over, but it missed every part of my anatomy when it fell! Oh, yes!

Off to the kitchen, with a heck-of-a-thirst on me. I got the kettle on the boil while I moved the handwashing to the airers. Made the brew, and had to have another wee-wee. And what a change too, this one was of the ELPJLP (Extra-Long-Powerful-Jet-Like-Painfull) variety. Rarely two wee-wees of the same style in a row nowadays. 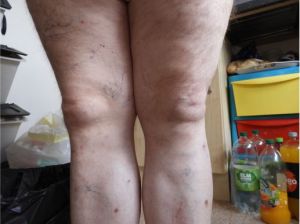 Arthur Itis seemed to be attacking in short bursts this morning. I’ve never known this to happen before. It may be because he’s been upgraded to Rheumatoid, and he’s showing off? Hahaha!

A quick snap of the pins was taken, I must say, the knees look so different to yesterday. If they stick out any further, I’ll be walking into things without realising it! Hehe!

I got the Saturday post upgraded, with a lot of difficulties from the right side shoulder, fingertips and leg shaking from PNN (Peripheral Neuralgia Neil!) There, he’s got a name and an antonym now, same as the other ailments. Well, it seemed only fair. Bonkers? Me? Maybe! But it took me hours!

I went to make another brew and have the fifth wee-wee of the day! I got the camera out to take a photo of the view, took one, and got the shakes, and nearly dropped the camera, I fumbled hitting many buttons as I caught it and found myself with the flash open, the light blinking, and on an options page, and selected Apperture ‘On’. Took another photo of roughly the same view.

But of course, not knowing how I got into the choices in the first place, I could not find out how to get back to them, to turn it off! Tsk!

I pressed on with creating some Thoughts, Dedicated Day and Political Humour graphics and templates on CorelDraw. This took me, to do just four days worth, a staggering seven hours! But, I enjoyed doing it, but not the ever correcting things, thanks to PNN (Peripheral Neuralgia Neil!) shaking and dancing shoulder and hand, and the fingers, lack of any messages to the brain to tell it when they were touch-contacting anything! I really must consider how long I can put up with this, as Stroke Doctor, Senthil Kumar Rontala Raghunathan (I love that name!) told me, it is only going to get worse! I felt a little down in myself at these thoughts and pondered over things to myself.

It was now time to get started on Josie’s meal. Which is another sad tale to tell! On Thursday, Jose and I were walking through the link-passage after getting off of the bus, ad a chap was setting up a fruit and veg stall. I bought three large potatoes if you remember, and had one that night cheesified and roasted. Bootiful it was!

The other two, I stored away for today’s meals to make. 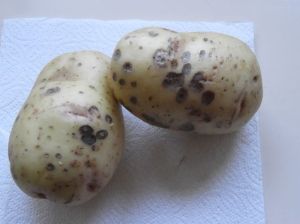 Oh dear, Oy Vey, and Crikey! This is a photo pf the two spuds when I got them out to use! This is after just two days in a cool cupboard. It looked like Common Scab, or Early Blight to me! I recall hearing of the potato (and other) crops were going to be ruined with all the rain we’ve had, on the radio! Huh, all this and Brexit Fatigue! Poor old England! Not raining on the radio, I mean I heard of it on the radio. Hehehe!

Fortunately, I had some instant potato in the cupboard to use for Josie’s nosh. I prepared it and delivered it to her door, as usual at 12:00hrs on the dot! I used some of the Kenyan petit pois, but they came out a little hard, even after the three-minute simmering guide, I increased to six-minutes. I explained this to Josie and told her about the potatoes. She seemed glad to be having her own chef on Sundays, Hehehe!

I was done in and fatigued now, no more energy left. So I got my own nosh sorted. I’d left some of the cheesy potatoes in the oven with it still on, Humph! They were well-browned, but I ate it all the same! The dearest thing on the plate was the petit pois! 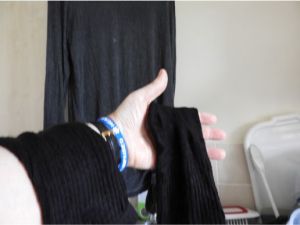 I got the pots washed, and sat down in the £300, second-hand, rickety recliner to watch some TV. After a few hours nodding-off and waking, I rose for another wee-wee, of the WYSAO (Weak-Yet-Spraying-All-Over) style.

Then got the handwashing done. Only a shirt and one pair of socks, so it didn’t take me long to get them done and hung to dry.

I think I must have spilt a little cooking oil or something on the floor, whatever it was, it was not visible, but I soon found it when I slipped and skidded a bit. I was fortunate enough to have the four-pronged walking stick with me at the time it happened. I still twisted my back and clouted my elbow in the cupboard. Thus, I now have Back-Pain-Brenda playing me up a bit. But and however, it could have been a lot worse!

Down in the recliner again, and memories are now blank? Until I woke up in the morning. To find a well-filled GPWWB (Grey-Plastic-Wee-Wee-Bucket).