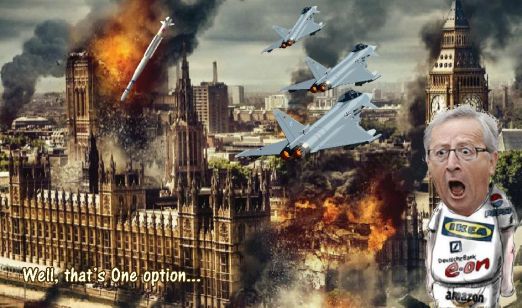 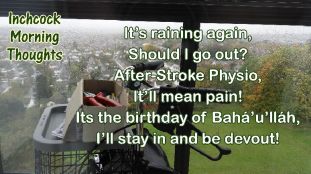 00:50hrs. Good morning, my fellow Wordsmithonians and photographicalisationalistical, philosophising, friends. Hope all is well with you?

I woke to sound of the flipping humming, droning sound that is all around the building, 24/7, non-stop! But it seemed to be worse, lounder and definitely more annoying this dark-dang early morning. Whether it was, or it might have been my frame of mind, or the hearing suddenly working again, I don’t know. It made me cringe at the knowledge that nothing could be done about it!

Ah, well! It was soon replaced with the call to the Porcelain Throne. Which over the last four days, has been absent, but it’s back on song again, at its usual time. Which is whenever I wake up. So, I struggled out of the Xyrophobia-suffering Brother-in-Law Pete damaged, seat while he was flat-sitting when I was in the Stroke Ward, and he fitted new CCTC cameras and searched for my valuables, which he found and took. (I still haven’t got them back yet nearly six-months later, and I’ve learnt he has given away my £80 worth if twenty-pence pieces to the RNLI), chair. £300, second-hand, near-dilapidated, gungy-beige coloured, c1968, sometimes working, uncomfortable, rickety, rinky-dinked, rattling, rusty, resurrected, reconditioned, recalcitrant, recidivating and rotting-away recliner. Grabbed the four-pronged walking stick, (I’m mastering it now, not falling over it so often) and off I wobbled to the wet room.

Well, it could have been a story and a half this session, but I’ll best skimp over it. It was bloody in the extreme, massive in size and needed medicationalisationing, involving Anusol, Anugesic HC, and Germaloids pads fitting, and a lot of cleaning up afterwards! Nuff said!

kitchen, and started to feel a little philophobic for some reason that was not known to me. Another mystery of my beloved Woodthorpe Court. That lies somewhere between the twilight zone and a wormhole slipping through a tear in the fabric of space & the universal continuum, illusion, delusion, & hallucination! I was soon sorry I mentioned my getting-accustomed to using the new walking stick. I got tangled up with it and knocked over the stuff on the draining board onto the floor as I attempted to retrieve the situation. Pee’d off with myself Mode Adopted!

I decided it would be a stay indoors to try and catch-up with the graphicalisationing.

Got the computer on, and was really irked, excruciatingly annoyed again, I still hated myself for having the tussle with the pots and losing the altercation. When… 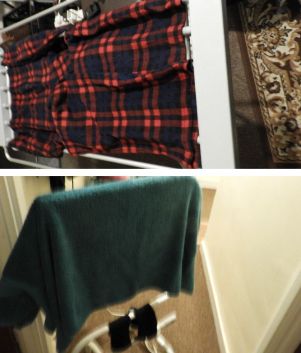 So, I got the kettle on, took the medications, finding out that I had not taken last night’s dosages. Unsure what to do about this. I was dithering and shilly-shallying with uncertainty. Oh, I grew more and more wee’d-off with myself as the day went on! Finally deciding, but uncertain about if it was a good option, I took the morning med’s, and just the 1½ Warfarins, and the Simvastatin. Made the mug of tea. And then I jiggled the handwashing around, to assist it in drying. I had both airers on the go. The stand-up and the flat one. The jammie bottoms were the ones that needed more help than the towel, shirt and socks to dry. 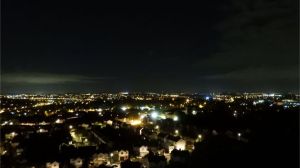 I took a photo through the unwanted nor liked new kitchen through the with the thick-famed, letting the wind in when closed, light & view-blocking, window. I used the Nikon camera because I had worked out how to get the Aperture priority setting on. At night or in the dark, it automatically gives a highlighted picture, that I like

I returned to the computer, find Mr Fries connection had returned – the system was so slow but working! Which will probably mean a pay-rise for him. Humph!

I pressed on, and after about five hours, I got the updating done! Phew! Got it posted off, and went on the WordPress reader. A lot on there today. 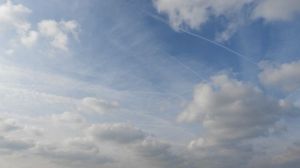 I spent many hours doing graphics for page tops etc. I must have spent six hours on these jobs. Thoughts and Day of’s even got a couple of templates made in advance, but I was feeling weary now. Made a start on this blog, but it was getting late. I made a brew, and the sky looked terrific up there. 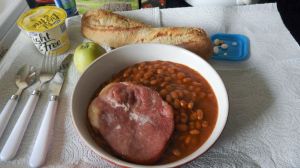 I made the nosh. Gammon ham, baked beans with added BBQ sauce, a sourdough baguette, lemon yoghourt and a tiny Cox’s apple. Took the medications with the meal. All good the stuff! (Not the medications, off course, Hehe!)  Even the little apple was tasty, the sourdough great! The fooder was a bit of a feast really. Flavour rating was 8.5/10. Slurp!

The wee-weeing seemed to have dried up today? And Little Inchies fungal lesion was leaking odd bits of blood, I had to sort things out and change PPs a few times during the day. But Arthur Itis and Anne Gyna were kind to me. And not a single Neuropathic Schuhplattler dance routine from the leg either! Smug-Mode-Engaged!

I got the handwashing sorted and hung to dry. And yet again, the fingers, hand and arm lost nerve sensations, and I dropped some washing as I was taking it to be hung over the heater, it fell on the drainer, knocking the same stuff over that I did earlier! Got it cleaned all picked up and sorted. But Anne Gyna was not happy about the bending down again, and let me know. Boy, did she!

I did the pot washing, stripped and got into the night attire, and settled into the £300, second-hand, imitation not-working recliner that Brother-inLaw Pete broke while was stealing my valuables when I was in the stroke hospital. To watch a Hustle DVD.

But things didn’t go to plan. (Nowt new there, then!) The DVD player would load the film, but not play it? So, being so tired, I just couldn’t cope with trying to sort it out and switched to the TV. I checked the programmes and began to watch an Interceptor episode. Falling asleep at the first set of advertisements. Zzz!

I sprang awake, thinking it was morning, and being in need of a Porcelain Throne Evacuation backed up my thinking. Out of the recliner, stubbed the damned toe en route to the wet room, and sat there for ages waiting for something to move or happen! I whistled, silently sang a song, tried doing a crossword and dreamt of being young and fit again, all before the motion began – again of its own accord, I had no control of the action. I thought at one stage, I was going to burst open, such was the magnitude of the escaping content. Less bleeding this time though. I felt exhausted?

I went gingerly and with bowed legs, not easy with using the walking stick that, to the kitchen to make a brew! This is when I realised I’d only been asleep for about an hour. Seeing the might view out of the window, and reading the clock, gave me a clue as to the time. Hahaha! Twit! I took three snaps of the horizon, all in different settings on the Nikon camera. But blown if I could see much difference?

Of course, I wrote down the settings, but can I find them? No!

I climbed back into the not-working-at-the-moment recliner-less recliner and did my best to nod-off. But it took a while!