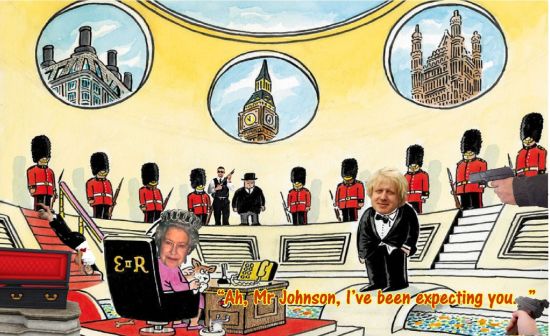 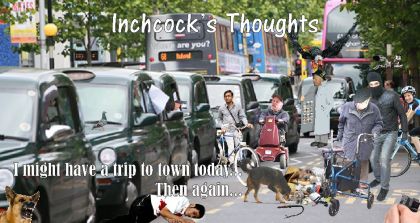 As if I needed a warning!

01:35hrs: Woke, coughing, and feeling sorry for myself as the sore-throat seemed to be burning. I pondered a few seconds on what day it was, and the duties and desires needed to be completed, how and when they will be carried out logistically and physically.

But I was soon fumbling my way out of the recliner, caught my balance, grabbed the four-legged walking stick, and off to the Porcelain Throne. For perhaps one of the worst evacuations I’ve had in a while. The constant expectation of it starting lasted for a ten-minute crosswording session – and then things moved, a tiny bit, and stayed there! I felt like my body would split-open at any time! As eventually activity began, painfully, progressively and procaciously, I could either feel or sense the blood trickling through. Much later, the final uncontrollable burst of activity came, welcomingly quickly, the splash was unheard, I think things must have already been in the water before that final push. I stayed exactly where I was for a few moments, almost weary, but still glad things had been completed at last.

This feeling did not last long after I rose from the throne and saw the state of the Porcelain, which surprised me. The evacuated material had somehow disappeared altogether, leaving traces of itself and some splattered hæmorrhœa everywhere! I set about cleaning things and myself up. I must get some more of the haemorrhoid cream if I go out today.

All cleaned and refreshed, I returned to the recliner-room to investigate the state of it. Remarkably, no signs of nocturnal-nibbling, any dropped or spilt articles or items, but the reserve walking stick was not hanging on the door handle where I usually leave it? Not too bothered, I’m bound to come across it later. I tend to keep the short stick near the front door, and the reserve one on the kitchen or front door handle, and use the four-pronged stick, that many times, because it can be left standing of its accord so as to speak, I forget about it, and spreading the others around, means in the event of any Colly-Wobbles or Dizzy Dennis spells, I don’t have far to go to get support.

Doing this spreading around of the sticks actually makes me feel good. To me, it shows I still have some little logicality, lucidity, and smidges of organisational integrity and semi-clarity left in me. So my lethologica, absent-minded, forgetfulness, paramnesia moments, and waters of Lethe incidents don’t get to me so much. I think anyway! No doubt there will be more Whoopsiedangleplops which will test me later on. I believe that my tendency for such Whoopsiedangleploppery (Thanks to Tim Hancock, from New Mexico for this word), needs to be tackled, but who can anyone help in this? 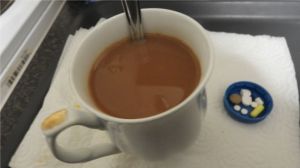 I made a brew of strong flavoured Thompsons tea and took the morning medications.

Off to the computer, and had a dedicated session of updating the Tuesday post. The finger-tip-nerves were not too bad, and I pressed on determined to get the job finished in time for me to catch the 09:30hr L9 bus, to Arnold. And boy, did it take some doing! Tons of photographs to be loaded, edited in CorelDraw, and then be added to the blog. This task took me over five hours! But without many wee-weeing, which is making me worry a bit?

I then went on the TFZer Facebooking, another couple of hours. Then the WP reader section. Finally, turning everything off and going to get the ablutions sorted, as there was not much time left if I was to catch the bus.

There is missing writing here… the tag died one me, and I lost everything!

Re-written in the morning: I went to catch the bus and knew there would be a chance of my missing it. So I hastened down, and out along the front on Chestnut Walk to the bus stop. I had a jolly nattering session with others.

The L9 arrived within a couple of minutes. I got on the right bus for once (Hehe!) First time I’ve seen the bus fully-filled at out stop, before. All the side-saddle seats were taken up, and with trolleys taking up three of the spaces. I got a bruise or two getting my mass in a tangle with the three-wheeler getting into an ordinary seat. Most folks dropped off in Sherwood. I moved to a side-saddle seat, which was not comfortable with a James Hunt supporting driver. 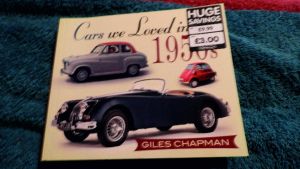 I had a viewing of the book on 1950’s cars loved in England. I had the urge to go somewhere other than the Asda-Walmart to do my shopping after they had let me down with the delivery, so I dropped off in Daybrook and went straight into the Sainsburys store. Which proved to be an expensive choice. Tsk!

I spent well over an hour strolling around, being assaulted bu other customers elbows, bags, shopping carts, having my feet trodden on, elbow bashing, and merely being walked into by a couple of them! It was a lesson, in future, I must not go into this store again: Their customers are violent and were not kind to me today. Haha!

At the self-serve checkout, I had an embarrassing few incidents of incidents. I gat ti putting the things through, and when it came to the DVD, it was locked in a security casing, so I asked an assistant, he said, “Not me, I’m off for a break, ask them!”, pointing in the  general direction of two young ladies having a natter. I stood patiently waiting for them to stop, which they did a few minutes later, and one of them shook her head up and said dominantly, “Yes?” I apologised for bothering her and handed her the DVD, and she offered an automatic smile, tutted, muttered, and went off to take the security tag off of the DVD. I returned to the cash-till, and a couple of more items were put though, as she returned and handed me the CVD-DVD, then went back to her natter with the other assistant. I carried on and got the things through. Taking care to position the heavy stuff for the trolley bag, and lighter goods for the carrier bag separately from each other.

When it came to paying the rather large bill of over £39, I put the digits in the card reader, and nothing happened. I signalled to the nattering assistant again, and she came over and gave me a look that said, “This old fart should not be allowed out on his own!” As she pointed out, that I had not inserted the card in the machine! I did feel the right Schmuck!

I thanked her, feeling a proper idiot, and carried on and paid. I struggled a bit to get the things into the bag and carrier, but the trolley seemed semi-stable as I was walking away, now having to rush a bit to get to the bus stop on time, I looked back to see if I had left anything on the checkout, and was extremely glad I did! I’d left the card in the machine! I returned to collect the cash-card. I spotted the ladies still deep in conversation, both offered me a look that spoke volumes, one of detestation and nauseousness. The other of guilt, perhaps at not noticing the card cock-up I made?

I came out of the store, feeling an even bigger shmo than earlier, and panicked a smidge, convinced I would now miss the bus. Fortunately, the L9 was a couple of minutes late, and I made it with about 30 seconds to spare. So, the day was mixed with some good and bad luck! A couple of Winwoodonian’s who got on the same bus pointed out how lucky I was! 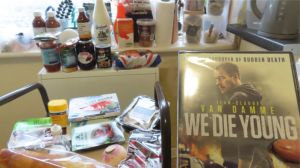 I got the receipt out and read through it on the way home. Surimi Royal fish, Graham’s whole organic milk, a can of gammon, a turnip, black beans, cough linctus (I can keep one in the shopping bag for when I’m out, the other in the kitchen. [Smug-Mode-Adopted]) baby beetroot, packets of mild chilli sauce, passata, roast cashew nuts, the DVD ‘We Die, Young’, a cheese baton, Dried onions, mushrooms, tomatoes and a pot of Magnesium tablets (Cramp-easers!) Unnervingly, I realised I had bought both a vegetarian and a proper meat packets of Pork Ribs in sauce. I do remember looking at them both but felt sure I got only the meat one… Obviously, I was wrong. Another bêtise on my behalf, Grumph! I’ll have this for tonight’s nosh, and get it out of the way. Otherwise, I’ll never eat it, served me right! 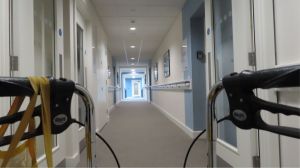 Back at the flats, I made my way through the link-passage into the big room. Where I stopped for a natter with a couple of folks. The fruit and veg man had not yet set-up his stall, so I thought I can always pop down again later. Which of course didn’t happen, I forgot all about it!)

I got the fodder put away, still annoyed at myself for getting two different pork ribs packs! I left the vegetarian one out for cooking, and put some mushrooms in the pan, and tomatoes ready for slicing and adding later. The imitation pork ribs, I must say, when I opened the packet, it looked and smelt good.

I got the not-meat in the oven. And set the timer to remind me to add the mushrooms, tomatoes and extra bbq sauce later. Sliced the tomatoes ready, and got on with the handwashing.

Which with the jammie-bottoms, took a little longer than planned. I stopped when the alarm sounded and put the extras in the tray, and back in the oven.

Then finished the washing and got it hung up. 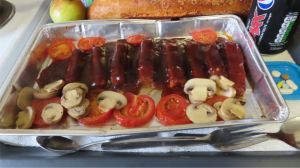 I got the meal served-up on the serving tray, I used the oven dish instead of a plate, to save time washing up Hehe! It appeared to be tasty enough to me, with the tom’s and mushrooms, an apple the cheesy baton, and a can of Pepsi, I got settled into the recliner to feast! Full of contentment and anticipation. 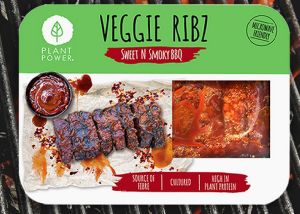 What words can I use? What can I say? Just when I anticipated a royal feast and thought my allotriophagy had found success. The flavour and context, of the imitation pork, was disgusting! Deglutition was hard, especially with the sore throat. Most of this abhorrent meal was binned, and rightfully so! Oy-yoy-yoy, the disgustingest and indigestible, chronically bad-tasting vegetarian dish I’ve ever had! Eurgh! All sugary and sweet! My Taste-Rating of 1/10 is the best I can manage, I might as well of just ate a bag of sugar!

I threw away the ribs and loaf, but I did eat the tomatoes and mushrooms, with some milk roll bread. The cheesy baton, very hard crust, was too much for my sore throat and mouth ulcers to cope with. I settled down and wondered whether I should watch the DVD or some TV – not that it mattered, I fell asleep before making a decision!