23:15hrs: I woke to find the brain clinomania affected. Slowly, dilatorily turning from a deep sleep, into a mock-activation mode. At least the brain was working: ‘Josie’s meal to do today’, Ocado delivery twixt 0600 > 0800hrs’. It didn’t get far, as the need for a wee-wee arrived, and this meant the moving of the flobby-bellied yet rhinoceros-sized short tubby body, from the £300, c1968, rickety recliner.

Argh! A brand new pain was stinging me, the right side of the chest and shoulder. No idea what it is, but most likely I’d been sleeping in some sort of warped, bent position. Getting up was more manageable today, and I’d left the four-pronged walking stick handily next to the Ottoman. (Why can’t I always do this?)

Off to the kitchen, got the kettle on and took the medications with some orange juice. I got the hiccups pretty bad, which lasted for half an hour or so, then stopped? The chest and shoulder were still aching sharply. Made the brew and off to the computer.

This made things go slower than ever. At times it would not let me upload any photographs, or just froze for differing lengths of time. Gribble-Crap! But, I had a banal persistent in me this morning and pressed on. Moaning and grumblingly, I admit! Hours later, I got the post finalised, Phew, worra struggle! Thanks, Mr Fries!

The wee-wees were persistent, all of the WYSAO (Weak-Yet-Spraying-All-Over) mode. I sent some pictures to Pinterest, then went on the WordPress Reader. Next, on to the TFZer Facebooking.

Nearly time to get the ablutions done, and the EQ was telling me to expect problems.

I had to stop suddenly on the computerisationing when Saccades Sandra started off. There was no way I could cope with typing and or the screen flashing. The loss of eye-control was a little unnerving. Vision blurring badly as the eye-nerves were sending and twitching then every which way! I had concerns about risking shaving now. But I’ll give a cautious try. Off to the wet room, I doddered.

Well, if ever I deserved a few moments of Inner-Smugness, it was after doing the ablutionalisationing! It went amazingly well! Dropsies, only four, toothbrush, razors (2) and unfortunately, a bottle of disinfectant when I was cleaning up afterwards, and it split open (plastic bottle). But no bother to clean up, although it was too early to use the shower cause of the noise. So I took water from the sink and rinsed it away, and dried the liquid with paper towels, using my left foot. So I didn’t have to go down on my knees and get stuck down there again. (No nurses to come to save and rescue me today, Haha!) No teeth-cleaning cuts, no shaving cuts! Little Inchies fungal lesion was not bleeding! Fair enough, I did get the odd bruise out of the Sock-Glide usage!

After I’d got the socks on, I realised that the left leg had more water-retention than the right one. But, I soon had a message from my EQ, and all became clear as to why this had happened. It has to be the Peripheral neuropathy’s Synapse, (The area between nerve cells or neurons that transmits nerve impulses that are dying) are not getting the messages to the brain? This would explain the legs, almost several times a day changes? In degrees of the Clopidogrel, Haemostasis Deep vein Arterial Thrombosis (DVT), and iliac, femoral, and varicose vein conditions? Oh, I love it when I can get a chance to sound knowledgable and intelligent. I’d be lost without the internet, yer know. Hehehe!

The chest and shoulder pains are still with me. Tsk! I meandered with the stick into the kitchen to make another brew, and the intercom lit up. It was the Ocado delivery man. I gathered the returnable carrier bags and went to the door as he arrived. The chap put them in the hallway for me, we had a friendly litt

le short natter – but I’d not the hearing-aids in, so I’m not sure what we spoke about, but he laughed, so I did, as he departed. I took the bags one at a time into the kitchen and put the kettle on again, and took a photo of the delivery after I’d emptied the packages, and laid the nosh out, then realised there was no paperwork or email with details to check if anything is missing or not with? Ah, well! Here are some snaps I took of the products I purchases, including some luxury items for Julie and myself.

The message on the smoked Haddock had made me smile. ‘Atlantic Dyed Smoked Haddock Fillets’ I should hope they have died! Oh, I am a clot at times! Hahaha!

I noticed that the Scilician black tomatoes had ‘Fully Recyclable Packaging written on the box. Minutes later, I turned and saw the recyclable tomato bag actually moving to the hot mug of tea, and clinging around the mug, for dear life! I had a job pulling it off without spilling the tea, but I coped with it. ‘Smug-Mode-Engaged’ again!

I had a quick bash on the TFZer Facebook site, before getting Josie’s dinner cooked. Chickpeas in tomato-puree and passata. Two pieces of smoked Haddock, beetroot, cheesy-potatoes, sliced tomatoes, crispy onions, mushrooms and a Limoncello dessert, with a few nibbles, and a Black Tomato for her to have later in the week. Oh, and a can of Gin & Tonic. We had a quick natter and she let me take the photograph as I delivered the meal.

Then back to the flat and to the Porcelain Throne. A messy, bloody, painful, but usual evacuation. Had a wee-wee, and got the camera, and set off on a photographicalisationing visit to the Winwood Court rooftop leisure centre.

Out, down in the lift, along through the snuggly-warm link-passage, and into the new, heated, rubber floored, gleamingly clean elevator, and up to the fourth floor. I like the commanding voice of the lift messages in these lifts, I can’t understand a word she is saying, but the tone is enough. Hehe!

Out of the elevator, into the free of any tellurians, beautiful, warm, snug-as-a-bug social room. I have yet to meet any residents in here, or on the rooftop, either. No, I tell a fib, I dd see a mother and daughter inspecting the place once, but mother turned it down.

I pressed the big open button to the alfresco roof seating area, and the wind made the trolley go backwards into the knees! It was that strong! I should have remembered from opening the flat window earlier, but didn’t.

The leak and blockage on the rooftop are still the same. I caught a decent view of the violent wind-made ripples in the ever-growing smelly puddle of rainwater, leaves, fag-ends and oil. I leant over the safety barrier to take a downward shot of the electric-car charging point. I was surprised at how well it came out, considering the buffeting I was getting from the gale. A final shot, to try and catch an image of the bent over in the wind plants, suitably positioned next to the plant room. Haha! I’d had enough of being blown about, and went back inside. It’s no shock to see they have had to chain the furniture to the wooden flooring, is it? Brrr!

I imagine in summer, it will be packed with up here with geriatrics and a couple of nonagenarians and family visitors. I hope so, I also would like to still be capable of getting up here and having a chinwag and laugh with them, in the warm summer days. 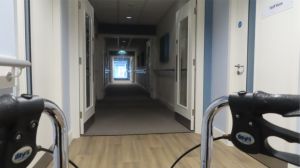 Back down in the lift, and then along the warm snug people-less link-corridor, back to the cold Woodthorpe Court lift lobby. It looks a little eerie in this picture. The lights are the motion-activated type.

I got back in and decided to get the nosh done, before I fell asleep, for I knew I would soon (EQ).

I got the washing up done first (saucepans, oven-dish, spatulas etc.) after serving it up, again because I felt I was soon going to drift off into the land of nod! No handwashing, too tired! Garden peas, with demerara sugar and salt, smoked haddock, beetroots and black tomatoes. I put one on the tray so you can what they look like. Really a different taste, almost meaty.

I put on another Bond movie, ‘A View to Kill’. As an aid to counter my soporific tendencies, and started to watch it while gourmandisationing. The 9/10 Flavour-Rated meal, was all gobbled up. The taste of those black tomatoes is amazingly like pork? The smoked haddock was probably the best frozen-fish I’ve ever had. Highly palatable!

I needed a wee-wee, so took the tray and things to the kitchen, and put them in the sink to soak, had the SS (Short-Sprinkly) wee-wee, washed and returned to the recliner. I was soon in the land of nod… nice, ZZZ!