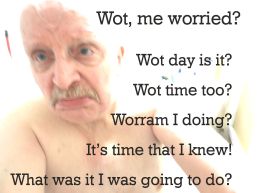 04:40hrs: I woke up to Shuddering-Shoulder-Shirley, giving me a right shaking, clouting my elbow on the arm of the chair at the same time. Even the more than ample midriff was wobbling along in unison with Shirley’s beat!

Cor-blimey, it took some time before she eased off as well. No wonder I woke in such a sudden-sharp, shuddery, jolting fashion.

But, at least it woke me up properly and got the brain, alertness and awareness working together. As soon as things subsided, I foolishly got up too quickly, to get to the wet room for a wee-wee.

As I was pushing up the weight of my elephantine torso from the recliner, an extra little shudder from Shirley, had me crash back down into the chair. Hitting my nose of all things, as I twisted to put my arms out, on the edge of the seat’s arm, and missed it! Now that’s something different that I can’t remember having for years, a bleeding nose! (Although, at school, I remember getting given many of them)

I got safely and Accifauxpa-free, into the wet room, dropped the PP’s and relieved myself. Another powerful session of the BOASSA (Blasting Out-and -Suddenly-Stopping-Abruptly) mode. But it was painless, that was a treat! As I was changing the PP’s, it came apparent that the legs were even more anaemic looking than yesterday morning.

However, for a nice change, Clopidogrel Clive’s lumps and blotches seem to me, to be taking a vacation. The Thrombophlebitis and spider and venous veins, (phlebitis),  and iliac veins, had died down, too! I feared I was suffering from oneirataxia, but, no, they really were hardly showing on the skin surface at all. Arthur Itis’s knees were far less mangled looking, but he was still supplying me with plenty of hurt and pain when I walked. I think, at that the moment the more painful and handicapping, was coming from the poor feet and overgrown toenailed toes. I’m not complaining about this, but I am just a tad confused.

Not that things were getting me down at all. I possessed an outlook of a phenomenal difference to yesterday. I was singing under my breath and nattering to myself constantly. Bonkers, but contented!

By the time I got around to taking a look at the nose, it had stopped bleeding completely and was barely painful at all. Other than giving me a mild headache of sorts. Hehehe! Another possible reason for my outlook of lightness was that Little Inchies fungal lesion was not bleeding. And this to another day stuck indoors, so another risk-free, none use of the Sock-Glide with its accompanying bruising and bleeding. I hope I can remember how to use it when the lock-in and lock-down stops. I haven’t been on a bus, or to a shop for months now. Hey-ho!

Then a concerned came to mind. I have only two days of prescription medications left. Are Carrington Pharmacy, 343-345 Mansfield Rd, Carrington, Nottingham NG5 2DA, Telephone number: 0115 960 5453, (a few doors down from Lidl) going to let me down again with the delivery, and leave me without medications for weeks again? My earlier high-spirits came crashing down, and I began to sink into the darkness again! I wasn’t really ever meant to be, life is now too complicated for me. I limped, no singing now, to the kitchen. Checked the medications, yes, just two days worth left. They may arrive today? Globdangles!

Morosely and without much interest, I made a brew of Glengettie tea and digested the medications.

I got two small black bags of rubbish to the waste chute. Hobbling is no pleasure with the toes and feet in this condition! Then got on with updating last night’s diary. It took me a long time, but I got it finished just before the Iceland delivery two-hour period was about to start.

I went on Pinterest and WordPress Reader section. Then the TFZer, and Winwood Heights Community Group Facebook pages.

Jenny called me. She knew I liked Melton Mobray pork pies and asked if I wanted her and Franks, as they don’t eat them. I thanked her kind gesture. She said she’ll pop the down later, How kind! ♥

As I was starting on today’s diary, the intercom buzzed and flashed. One’s Iceland delivery had arrived. I got them into the kitchen and unloaded them to check on any shortages or substitutions. But this time, it was a case of, ‘I don’t remember ordering all this bread?’

For there was bag after bag of cobs on the Iceland order. Panini rolls, wholemeal baps, wholemeal thins, cheesy cobs, and crispy rolls! Was I under the impression I had ordered only the Panini rolls and bread thins? And, how or why I ordered battered fish, and more chips, greasy-dripping soaked ones, that I do not even like, is beyond me!

I imagine that I must have had a blank-spell while I was ordering them? Not that I would have been aware of it at the time. Tsk! Life is becoming a bigger challenge all the time!

I made a start on this blog. And after an hour or so, the doorbells chimed out the Dusty Springfield ♫ I only want to be with you ♫, tune. I fumbled to get some trousers and a shirt on. My heart and hopes raised to a ridiculously high level; I’d somehow convinced myself, that it would be the Prescriptions being delivered from Carrington Pharmacy, 343-345 Mansfield Rd, Carrington, Nottingham NG5 2DA, Telephone number: 0115 960 5453, (a few doors down from Lidl), and warmth and satisfaction grew as I hobbled to the front door.

Nope! It was Josie; she had at last seen the bag of food left outside her door for her yesterday and didn’t know anything about it. She thought I’d left it for her. Bless her. I’m not the only one that gets blank spells. I explained what it was, but the gal had no idea what I was talking about, and ended up more confused, I think. I’ll have a word or two and put her mind at rest tomorrow.

But at the moment, I had to live with the disappointment of the ringing door, not being from Carrington Pharmacy, Nottingham NG5 2DA, Telephone number: 0115 960 5453, (a few doors down from Lidl). I seem to be finding myself in highs and lows today.

It’s already afternoon here. The weariness is already dawning on me. Surely I cannot be asking too much for the prescriptions from Carrington Pharmacy, Nottingham NG5 2DA, Telephone number: 0115 960 5453, (a few doors down from Lidl) not to be late, yet again?

I went on Facebook again. I’m not up to concentrating on graphicalising, in my current black mood over the uncertainty of the prescriptions.

The doorbells chimed out again. I fumbled to get some trousers and a shirt on again. Got to the door, knocking over a pot of birdseed en route when I had a wobbly, that spilt out all over the floor! Someone had left me packets of Melton Pies and sausage rolls (Which I dare not eat) on the floor. So, I put the pork pies in the fridge with the others, I’ll never eat them all before the sell-by date, but it was a lovely thought from someone. Then I had to clean up the birdseed in the hallway.

It took me over two hours to clean up the birdseed. Made a right bigger mess, as I could not step over the grain ones, and crushed some. Having to start over again. No good hoovering, I tried. So, I had to use brush and dustpan; but kept getting interference from Nicodemus’s Neurotransmitters, Suddering Shirley and Shaking Shaun. I was dropping stuff as much as what I got to the bin!

I nearly called Jenny for some tips on using the Vanish Gold carpet cleaner. But when I eventually found the spray, the instructions seemed clear enough. So I gave it a go in the hall.

I backed my way along the hallway, spraying with foam, rubbing it in. I ended up stuck in the front room for two hours while it worked its magic. Then I have to hoover up.

I went of the updating of the diary. Every bone and joint hurting now, and Anne Gyna has started to kick-off. All this, because some kind person dropped of the pies for me. Hehehe! I’m seating like the devil now, too. But, can’t get out to have a wash until I’ve done the hoovering. Oh, I do hope it comes out alright.

On a proper downer now. Stuck in the front room for two hours, while the carpeting dries. Fingers crossed! Put the vacuum on charging. It was getting a little warm, so I decided to open the balcony door.

Pickled-Walnuts and Clogumbobskitit! I could not unlock the balcony door! All that hassle to get it to lock on Friday, and now, more hassle to get it to open on Saturday night! I gave up in the end and just prayed there is not a fire, and I need to escape the flames and fumes.

I’m hoping it’ll be my own fault and I’ve just forgotten about how to operate the mechanism. Not that anyone can come to look at it for me (Lock-down etc.)

I got some nosh sorted out, and with being all uptight and bothered, I forgot to take a snap of it. I ate it all anyway. Albeit with a little unenthusiasm, and depressionalistic thoughts.

I was too uptight and wound-up for sleep to come to me. The Thought-Storms went on the rampage in the grey-cells. I kept the TV on and was temporarily glad I did when I found that the Red Dwarf film was showing.

It’d been on last month, I recalled the disappointment of my falling asleep then watching it, and missing the end. There is no doubt, finding out about, and staying up so late to watch it, had improved my emotionally cluttered state of mind.

I perked-up a tad and went to make up another bottle of spring water and orange cordial. To guzzle, hopefully, while I was watching the film.

Heartbreakingly, I nodded-off again during aa set of commercials. And woke up as the theme tune played and the credits were rolling! Humph!

I was back in the blackness. I wondered if I will ever manage to see this film throughout? My enthusiasm for life drained. Take today;

I was a little worried and concerned about the medication shortage – Not too much though – But I was feeling defeated and rather low – From somewhere, determination did grow, and I miraculously started singing, I’ll give life another go! Hahaha!

Belatedly, I went to do the washing up. Billy Fury’s ‘Cross my heart’ was being sung, well, silently mouthed.

No doubt about it, I was in a strange state of mind. A mixture of unbelievability, yet acceptance of my bad luck, and ailing health, wanting to give up altogether, and yet, being determined not to surrender to the blackness.

A most suitable view from the window was on view. In a way, I read of my state of mind in the sky. The ferocity of frustration. The dark depressive clouds. The loneliness. The hopes of light at the end of the tunnel. And the beauty of life! (Pull yourself together, Inchy!)

With some twisted illogical hopes, semi-logicality was restored, I returned to the recliner. And was with Sweet Morpheus within minutes, free of frustrations, worries and calm, for a few hours.