Woke up, in need of a wee-wee. Out of the £300 second-hand recliner and felt the crunching under my feet. Klutz! I was treading on and crushing some biscuits, my favourites too, Scottish Shorties, fall had fallen out of the biscuit pot with the lid off, that had apparently tumbled off of the chair. Nocturnal Nibbling Again? Tsk!

I couldn’t vacuum them up this early, or late, whichever way you look at it.

Another cold night. I got the woolly hat and slippers on.

Off for the wee-wee eventually, with the biscuits Accifauxpa delaying me, I only just got there in time. Phew!

In the wet room, I collected eight dead Evil ironclad Boll-Weevil black biting beetles and chased three very live ones that were too fast for me.

I washed up and went into Action-Man-Mode, on a search and destroy mission after the evil weevils in the kitchen and spare room. The kitchen produced two live ones captured, and around fifteen dead bodies collected. The spare room provided a lot of dead carcases, and just one live beetle.

The Raid Kill Spray did a good job this time. I resprayed in all areas, washed my dandies and got on with the Health Checks. Hopefully, the effects of the ‘Raid’ killer spray does not give me pneumonoultramicroscopicsilicovolcanoconiosis. Hehe!

Blimus! The weight had shot up to a new record high? The pulse was a bit fast, too. Depressed meself now. Humph!

Took the medications and off to the Porcelain Throne. Another messy affair. Huh!

Computer switched on and started this diary off. Then went to update yesterday’s log. Four hours later, I got the Sunday post finished off and posted. I didn’t mean for this tale of woe to be so long, but I got carried away elucidating on things. Sorry folks.

I visited the WordPress Reader section and looked at a comment or two.

Back to the wet room, and a decent session on the Porcelain Throne. During which I started to read the ‘Catastrophe’ book, but the brain went all vagarious on me. Just about all things that I deliberated over, feared, loathed and was frustrated about came to mind. Somehow, I felt drained afterwards? Most strange! Of course, no solutions or plans of action were adopted. 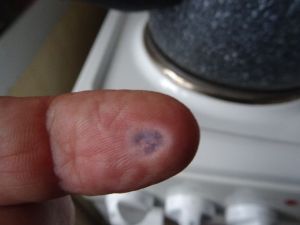 Washed the hands and face, and off to the kitchen.

crushing it with your finger against the hard worktop.

I don’t know what it was, but this picture from the internet is the closest to what the thing looked like. Lummox!

Back to the tale; after pressing hard and lifting my finger, the blooming thing just carried on his way, but at a faster rate of knots, toward the holes in the plasterwork in the window corner. But he’s much too big to get through, so where did he or she go? I hope these Panzer-built-like things haven’t decided to illegally immigrate as the Evil ironclad Boll-Weevil black biting beetles have? Oh dearie me!

Getting ready to go to get the ablutions done, I think I realised at least part of the cause of my sudden increase in weight.

The water retention in the legs has returned! I’d gone from chicken-legs back to the stumpy-legs overnight. And I seem to have more blood in the left leg than the right one? Distemperature of some sort? Ooher! And leaky toes? Hehehe!

Dang, it! The Oedema has been no bother for weeks, now its back. Phwert!

The ablutions went well, apart from Little Inchies Fungal lesion still bleeding a bit. But nothing that the PPs can’t handle. 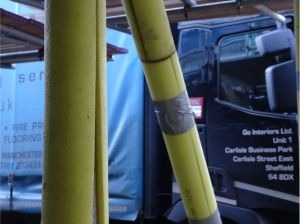 Got things ready and set off out. With two black bags of rubbish, rinsed empty jars for the recycle bin and a bag of recyclable gear.

I manoeuvred my way from the foyer door, through the maze of scaffolding and deposited the bags of rubbish, and put the recycle bag and empty jars in the receptacles.

Next I gingerly negotiated my way around a delivery lorry back onto the roadway (There is no footpath available), and navigated my way around the parked cars and confusion of fences and barriers along Chestnut Walk to the Nottingham City Homes, Winwood Heights, Hauptsturmführeress Wardens Temporary HQ, Willmott-Dixon workers breakfast and tea-break room, sarcasm & Insult distribution area, Tenants Socialisation Shed, telling Inchcock off Zone, things like crockery and pottery to be stolen from, and somewhere to rest while waiting for the bus, shed.

I got the crossword book out. The hut soon filled up with residents, and a chat and laugh or two were had. Out to the bus stop, where many more folks were waiting for the buses to arrive. I could remember some of the names, too. Cindy, Dora, Penny, Newkie, Paul, Bill and Welsh William. The other fifteen I could not recall the names of. Sad, innit?

We filled the City Bound bus up, and Penny allowed me to sit next to her. A good chinwag and laugh on the journey to town. 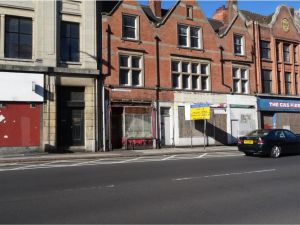 I got off on Upper Parliament Street and crossed over the pedestrian lights and up Glasshouse Street.

A sorrowful sight this road is nowadays. An abandoned part of the City of Nottingham. A muggers delight. All the closed down shops… a wretched heart-breaking scenario.

The times when the old Central Market, with its fish stalls, floral stalls and everything in between offered at reasonable prices. And those little cafes, the record shops, the hardware stalls, fruit and veg on offer… Such a missed market by all who remember it.

So much so, as I shook myself out of my daydreaming reverie, I nearly walked into a car as it was turning into the side street.

I hobbled to the Aldi store on Huntingdon Street and spent some dosh. I came out with Some nibbles for the box, a pork pie, a yoghourt, tomatoes, sugar snap peas, brown sandwich thins, lemon flapjacks and for the first time, I tried some German Rye Bread to make my pork and tomato sandwiches of. 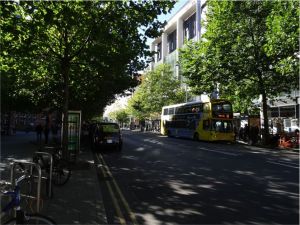 So, £9.66 lighter off, I made my way over the road and through the Victoria Centre on to Milton Street. Where the shadows and sunshine created an excellent chance to try to take a ‘Moody’ photograph.

Using the old Sony Cybershot again today, I had no idea what it would come out like (or of course any pictures I took today), as there is not a viewfinder on this model of camera. 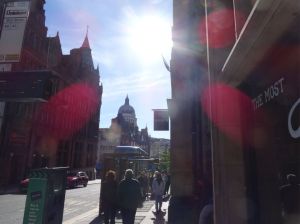 I had a limp around the slab square taking two photographs that just didn’t come out at all, just a splodge of colours?

I got to the bus stop and took a shot of the Council House from the shelter on Queen Street. Made a right non-success of this one, too! Ah-well.

Cindy got on the bus en route.

I’d just got out the camera to take a shot of what I saw ahead at the Co-op filling station because I anticipated there being a kerfuffle or something like that going on. So, I caught her as she came on the L9.

As we drew level with the Co-op shop and filling station, there was no bother or accident, just some chaps fitting a new sign above the petrol pumps, I think.

For the rest of the journey back to the flats, I’m afraid I had another of the ‘Blank Spells’. For the life of me I cannot recall anything of the bus ride from Mapperley Top to Chestnut Way or getting off of the bus. Now, I will definitely inform the doctor on my next visit.

I was walking along Chestnut Way when things came back to normal.

I see Cindy in this photograph ahead of me, but cannot recall the event at all, or taking the photo. I hate it when this happens!

LAter in the morning when I started this update, I found another photograph I knew nothing about, but have a distant inkling that I

was talking to Cindy when I took it?

But what it was that fascinated or caused me to take this picture on the left, in the first place, I don’t know.

I had a short-sharp wee-wee, and a rinse and things came fully back into focus again, brain-wise.

I thought that just maybe Cindy can advise me if anything happened untoward while I was off on my short escape from reality? Hope I didn’t do or say anything wrong!

Got the Health Checks done and medications take, then realised I had not taken the midday doses. Ah-well too late now. 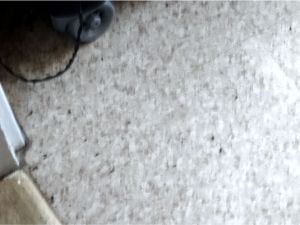 There a good few Evil ironclad Boll-Weevil black biting beetle corpses in the kitchen, I cleared them up and resprayed with the ‘Raid’ bug killer.

Then, did the wet room, about ten dead in there, no live ones, though.

To the spare room, and found plenty, masses of dead baby weevils and two much bigger ones that were alive. The blighter got away!

Cleaned my self up and washed.

Then I got the meal ready, an all-cold affair tonight. So no hassle in preparing it.

I made as planned, a black rye bread sarnie with pork and tomato content. Sugar snap peas, half a pork-pie, chip sticks, gherkin slices, tomatoes and apple. Followed by a lemon yoghourt and a lemon flapjack.

This is the first time I’ve tried flapjacks – and it will be the last. As for the German black Rye Bread, it was not easy to eat, as it crumbled so readily when I picked them up. And I am still undecided about the taste of it, very crumbly texture that I found a bit bland and unstimulating, yet enjoyed it. (Is that an oxymoron?)

Anyroad up, I ate it all, bar the yoghourt. I’d put it to one side while I gobbled the fodder and forgot all about it. Nebekh!

Did the Health Checks. Then washed the pots. Looked at the TV programmes and spent half an hour picking out what to watch.

Into the £300 second-hand rickety recliner.

Turned on the TV, and fell asleep within minutes.