0000hrs: Woke, feeling much better than last night. The mind had given back a limited amount of control to my brain. A degree of appetence had returned.

I lay perched on top of the £300 second-hand rickety recliner, appreciative that Dizzy Dennis and Shaking Shaun were both absent. 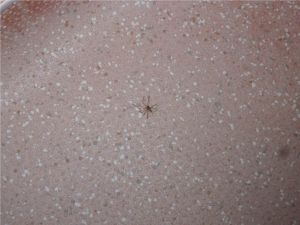 I decided that an Evil ironclad Boll-Weevil black biting beetle assessment would be a good idea, first task!

A wee-wee was needed, so I started the reconnaissance patrol in there.

Amazingly, I found only two live weevils, no live ones in there, and, the possible reason why; a tiny spider. Whether this minuscule arachnid would be big enough to actually eat one of the Evil ironclad Boll-Weevil black biting beetles, Hmm. I wouldn’t have thought so? I left him or her to it anyway, just in case, he was searching for his breakfast. 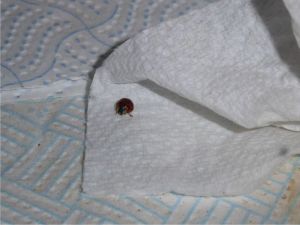 To the spare room, and found ten or so dead weevils on the light and view-blocking new window ledge and two live ones on a box. I dispatched them to snout-beetle heaven.

To the kitchen, and found only three dead ones! But there was a large LadyBug on the light and view-blocking new window ledge. I left the Ladybird in peace. Who knows, the reduction in the Evil ironclad Boll-Weevil black biting beetle this morning, maybe thanks to this bug?

Then, as it had grown more urgent now, I finally got to have my wee-wee.

The readings were down this morning.

Well, all apart from temperature, and the weight, of course!

I must try to get a hobble in today if I can.

Got the computer on, to finish off and finalise yesterday’s diary… and…

A long time later, it came back on, slowly. I struggled but got the Sunday Diary finished and posted off. Had a go on the WordPress Reader.

Off to the Porcelain Throne. Excellent Evacuation! Bloodless, and sufficiently substantial enough to allow me to read four pages of the Clarkson book.

I made a start on this blog up to here and chose to get the washing done.

Gathered the things needed and down to the

laundry room. It was a bit nippy this morning!

Nipped outside to take a couple of photographicalisations.

It seemed eerie for some reason, then I heard noises from the trees area and came back in sharpish.

I noticed the electronic sign near to the lift doors was telling me I could be an Ace Inspector! I’d love to, but there is not enough time every day as it is to do anything else. Due to my habit or hobby of falling asleep earlier each day! Hehe!

Back up to the flat.

Did some more work on this diary.

Then down to move the washing into the dryer.

Back up again to the apartment, and got on with blogging.

I thought about where I could go for my hobble later. I reckon to the arboretum. I’ll get the mallard and pigeon food in the bag now, while I think of it. I can call in Lidl to get some of there tasty Assam Tea bags and bread, as I limp through Carrington, perhaps, if I remember to… will I, though? Maybe, maybe not… or should I… Change of thought took over, off to the wet room for another wee-wee.

Back to the computer, and went on the TFZ Facebook site.

0440hrs: Back down to collect the laundry. Cleaned out the filter and wiped the drum, back again to the flat.

Tried to download some TFZer Halloween graphics to amend and use, then…

Computer turned off. Swore, then went to get the ablutions sorted. Took the black bags to the waste chute.

I decided to have a walk to the Arboretum for sure. Checked that the Mallard and Pigeon were in the bag, made a shopping list for Lidl: Tomatoes, bread or cobs and the Assam Tea (determined not to buy owt not-needed!). 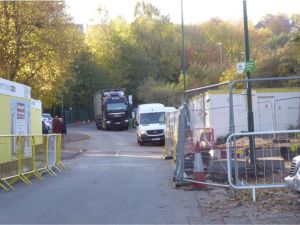 I set off, still a bit cool, but the walking should put that right. Along Chestnut Walk and threw a good morning to Wardens Deana and Julie through the window on the Nottingham City Homes, Winwood Heights, Generaloberstesses Wardens Temporary HQ, WC, Willmott-Dixon workers breakfast and tea-break room, Sarcasm & Insult distribution area, Tenants Socialisationalistic Area, Telling Inchcock off Zone, Crockery and pottery to be stolen from,

As I turned right onto Winchester Street Hill, the Pavement Parkers had just filled the footpath entirely with their cars!

That was nice of them, I thought!

Between the first vehicle (well, the first eight cars actually) and the mesh-fencing,  they had left about 4 inches for pedestrians to walk in! Grumph!

This is where I had to walk down the hill!

Still, only for a few hundred yards, then I got back on the pavement, just in time to cross the road to go down the incline. Oy Vey!

The sun was breaking through and causing some nice views. I did take a photograph that I thought would come out as a ‘Moody’ one. But instead, it disappeared into the ether never to

Near Hall Street, anyone parking on the double yellow lines would have had a reasonable excuse. Hehehe!

I limped along onto Mansfield Road. I called into the Continental Food Store, with hopes of finding some of the square lemon sliced cakes on sale. But they had still not got any in stock. Although I did get a lemon croissant. Never tried them before.

I got a decent pace on, although I was in no rush, up and over the hill and into Carrington.

I called into the Lidl shop as planned. And kept Mostly to the shopping list. The Assam tea, tomatoes and White Scottish rolls, I was just tempted by their Lemon & Lime yoghourt and bought one. 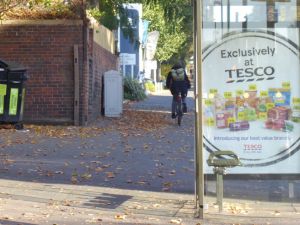 As I passed the college, a Herbert of the Nottinghamian Pavement Cyclist student young gentleman came close to hitting me as he came from behind at speed.

It gave me a jump, and I called out to him, thanking him. For which I got the two-finger gesticulation in reply. I hoped he might fall off of his pushbike as he wobbled a bit, but no such luck! 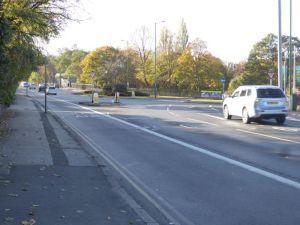 Along to the Gregory Boulevard/Mansfield Road traffic islands junction.

Anne Gyna was playing up a bit, but Hippy Hilda and Lower Backpain Petunia were a lot worse. Hehehe! Like the new name?

Half-way up the hill, I crossed over the road at the pelican lights.

Up to Forest Road East and left down North Sherwood Street.

I stopped for w while near the Guinness Trust’s Colville Court. An aged person’s dwelling. I went to see about moving there before I came to Woodthorpe Court. I visited and had a look around and spoke with one of the wardens.

I was impressed with what they offered. The single flats were about the same size as the one I’m in now. A nurse on site 24/7. Communal cooking facilities. Communal lounge with snooker table and TV. Your flat had an option of cleaners weekly. The heaters were not on night-heating. A bus to the

supermarket every Tuesday and Friday laid on. The staff do a visual check on you every day; unless you ask them not to. CCTV was internal and external. Hairdresser and laundry service available. I was deciding about whether to go there or not, then they told me the rent. Cor Blimey!

I got to the entrance and into the Arboretum. 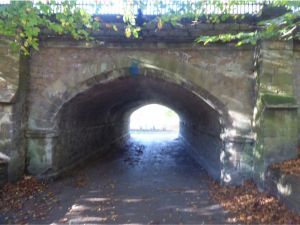 Walked towards the, what locally is known as Muggers Bridge or Tunnel.

As I walked under the roadway, I could smell an aroma I have never encountered before.

A sweet, yet unpleasantly nasal blocking smell? I suppose the nearest thing I can think of, would be cooking tripe with honey? Just thought I’d mention it.

I viewed the Chinese cannons from a distance. I was going to walk up and have a closer view, but I saw some youths lurking around them.

I got to my beloved duck pond eventually, after stopping to smell flowers and looking at wildlife. Squirrels, blackbirds, mice and what I think might have been a mole, as I hobbled to the Mallards.

My heart lifted when I saw that there were many of them there today. Sometimes, like the last visit, when they had all disappeared?

I shall only put this one photo of the birds on here because I intend to do another post dedicated to them.

It still amazes me, how the Mallards and Pigeons live together in such Harmony. At the Nottingham Canal, they fight and squabble all the time, then the Canada and Egyptian geese and join in. The Pochards get involved as well.

I spent an hour or so feeding and nattering with them. Hehehe!

The walk up into town set-off Anne Gyna and Lower Backpain Petunia. But once I was on the level, they both eased off for me. I’d just missed the L9, so caught a number 40.

I took this bit of Nottingham Nature on St Anns Well Road from the bus window. Bootifull don’t you think?

When we got to Winchester Street, the Gas people had blocked off the up-the-hill side of the road. I got off at the usual stop, and with all the traffic turning off to find a different way through to the Mapperley Top, I got over the road with ease and little danger for a change.

Walked back to the flats, met Doreen. Poor thing was drained and tired. We had a natter though before I had to get a move on to the wet room!

I got in a set about updating this blog.

Made a brew, and took this panoramic type shot from the kitchen window. It looks lovely in the sunshine, but it was not warm at all. Brr!

Made all the more enjoyable by not having to rush around at it.

Updated this post, which cost me a long time.

Then made up the Arboretum Blog, making it with a bit humorous comments, and posted it off.

Got the meal served up.

The Asda (Walmart) potato letter were very soft and bland inside. The vanilla and lemon croissant was too sweet but passable. The Scottish buns and Polish pork were great!

Fell asleep with the tray on my bulbous stomach, and somehow or other, it stayed there until I woke up at 0025hrs!