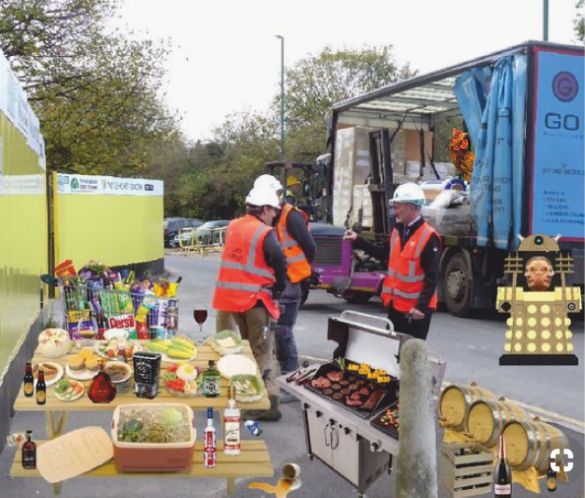 These Willmott-Dixon lads don’t mess about, do they? Hehe!

0050hrs: I woke sadly this morning. I felt melancholicism, was because the dream I’d been having had ended. The nocturnal reverie I’d had, was so lucid. When I became conscious of the fact that it was indeed a dream and not real, I was mortified! I knew that my beloved, long-lost cats, Cyril and Lady were in there somewhere, and I was so content and happy. Sometimes, waking up can be a drag! Tsk!

Once the brain had engaged and cleared, there was a significant lack of the usual morning wanderings. The incomprehensibilities that would typically come from the cerebration’s insistence of taking on all the problems of the universe, my fears, jealousies, and needs, etc. But not today, the brain was worryingly showing a rare but welcome imperturbability. No rushing back and forth with a melee of ideas, nervousnesses, anxieties, uneasiness or dreads!

These were replaced with the primary concern in my cell-cells box: Getting the graphics done for the Inchcock Today page tops. Having failed to get them sorted out yesterday, I knew this meant another day indoors on the keyboard, and hours spent on CorelDraw and WordPress. I hoped the concentration would last long enough this time, and Dizzy Dennis, Shaking Shaun, and Fatigue Frank would keep off.

First things first: Remove my avoirdupois, fat, fleshy, gross, wobbly body from the £300 second-hand recliner without injury or accifauxpa. All okay, got my tremendously torpid torso upright without any dizzy spells, and off to the kitchen to get the Health Checks done. 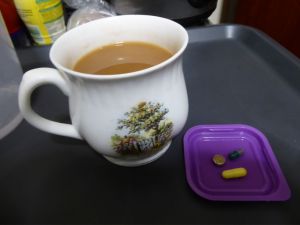 Took the medications and made a mug of tea. Then the summoning from the innards arrived, so, off to Porcelain Throne. Another messy affair. By the time I had cleaned things up and unsmirched the hands. The tea had gone cold when I got back into the kitchen.

Duodenal Donald had kicked off while I was on the throne. So I took an extra Omeprazole and Clarithromycin to counter Duodenal Donald, and a Dia-Limit for the Trotskies. 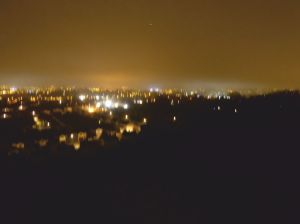 I opened the new window with the unwanted too many panes of glass to clean, light and view-blocking thick plastic frames and, outside ledge that blocks my taking picture downwards and checking for a fire in the event of a fire alarm activation.

The scene was pleasant again this morning A few spots of rain fell on the camera as I took this photograph.

On the computer, and I set about updating yesterday’s blog, and got it sent off.

Off for an SSWW (Short, sharp wee-wee).

Went on WordPress Ready section, then checked for the comments. Then, at around 0415hrs, I turned to the mammoth task of creating page top graphics on Coreldraw.

I took a break, to make another brew. (That went cold too!) Had a look out of the unwanted, more-glass-to-clean, view and light preventing, the anti-photographer thick plastic muti-framed new kitchen window. Took these two pictures, to the left and right. Eerie sort of scenes, I thought.

Eventually, many hours later, I got caught up with the graphics! But not until 1320hrs: During the long grinding session, I took about eight SSWWs, and made five mugs of tea (drinking one of them!)… but I let the other four all go cold. Klutz!

When my brain stopped working on the graphicalisastioning, in an instant, Fatigue Francis dawned on me. But, I was so pleased to have got the graphics done for this blog page tops, and without any Shaking Shaun or Dizzy Dennis interference.

I got the nosh prepared and served up, for I was sure I’d soon fall asleep. For mentally, I honestly did feel so haggard, hollow-cheeked, hollow-eyed, gaunt, washed out and worn to a frazzle.drained. 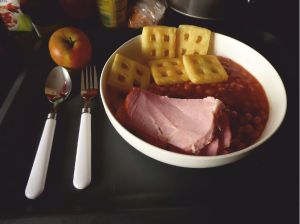 I had already got the baked beans marinating with seasonings: Demerara sugar, mustard, curry powder and BBQ flavouring. Cooked the potato waffles and added the pork loin.

I’m afraid that the apple had gone all black/green and nasty inside. Luckily, I didn’t bite into it. It collapsed when I picked it up to do so. Hehehe!

The tiredness was that bad, I didn’t eat anywhere near all of this meal. A flavour-rating of 7.5/10 given.

I tried to watch some TV, but no sleep arrived? I gave up and put on a Steven Seagal film. I felt sure this often-watched over the years, ‘Under Seige’ film would send me into dreamland.