I stirred into imitation life, with the head and mind so active, I swear the cerebrum must have been bubbling, throbbing with over-capacity and close to bursting point! Not that I could recognise any clear thoughts, fears or desires in there, for as fast as an idea or consideration arrived, others would follow immediately, it was like a conveyor belt full of emotions and inclinations. Intensity, fervour, with moments of such peace and beauty… but I’m damned if I could find any synecdoche or pellucid reasons, or even recognise any specific details from this noctuary.

I lay there on the £300 second-hand recliner and did nothing, just waited for the head to clear. Which it did within a few minutes. Instantly leaving my usual vacuum in place of the rabid, unidentifiable previous flood of thoughts. I wondered if I was going bonkers? I engaged my more natural “Never mind, carry-on Mode!”. 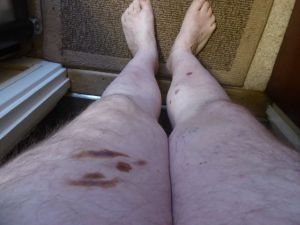 Hauling my rotund body with the gone-to-seed floppy extended abdomen out of the recliner, with ease this time, I poddled off for an SSWW. (Short Sharp Wee-Wee).

I could see no more new bruising on the legs this morning. The body did look a little ghostly and anaemic. But this happens more and more lately. With no bleeding from Little Inchies Fungal Lesion recently. Also, with Haemorrhoid Harold losing nowhere near as much as he used to blood-wise, I was a tad confused at my pasty, pallidness. I think the bruises are losing their vividity now. Typical, just I go to see the Doctor, whatever it is I was suffering with either gets unaccountably better or improved inexplicably. Huh! Perhaps I’m slowly transmogrifying into a leopard or jaguar? I am a fool! If anything it would have been an elephant or rhinoceros! Hehehe!

Washed the dandies and got the Health Checks done.

Sys, Dia, Pulse and Temperature all down against yesterday’s first checks!

I found the evening dose pot still full from last night! Missed taking them. I wonder if that might be part of the reason for the pale skin?

Ah, well! I took just the Warfarin and Magnesium Phosphate. Off for another SSWW.

I went on an EIBWBBBs (Evil ironclad Boll-Weevil black biting beetles) reconnaissance patrol. Amazingly, I came across only two weevils, one in the kitchen, one in the spare room. Both alive, large and quick enough to avoid my well-aimed sprays of the Rentokil bug killer, Damn it! But it was encouraging to find so few. Of course, I expect this is all part of their devious master-plan counter attack ploy to fool me again! I still distributed the contents of the killer spray in all rooms, having the now daily customary coughing fit in the process.

Off for yet another SSWW, which turned into a Porcelain Throne session of frustratingly long duration. Still, I got a few pages of the Clarkson Unofficial biography read. To the kitchen to make a brew of tea and take a Dia-Limit tablet to soften things in a specific department.

Made the mug of Assam, and took a Dia-Limit capsule… I thought I did anyway. But it turned out that I’d swallowed an opposite intended pill. A flipping Diahorrea one! Not sure what to do now… I decided to take a Dia-Limit to counter the other capsule, still uncertain if I’d done right or wrong of course. There can be no question about it now… I must be officially one of the biggest eizels on earth! What will my next cock-up be today, I wondered? Haha!

I got updating the Tuesday blog. Finished it (taking three SSWWs in between).

Off to make another mug of tea, English Breakfast this time. 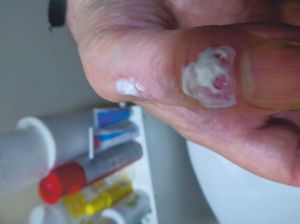 Well, it didn’t take me long to find out what my next Accifauxpa would be! I don’t know how or why I did it, but, making the brew, I poured the boiling water over my thumb! Tsk!

I ran cold water on it and went to the wet room where I keep the Savlon cream and dabbed some on the affected areas of the thumb. Now I’m thinking of applying for the title of Official UK Accifauxpa Champion of 2018! Hahaha!

I had a bash on the WordPress reader and then got on with starting this blog going.

An SSWW, and got the ablutions sorted. No shower today, too early, the noise you know. But I have to get things done now in case they are late arriving… mind you, they have never been on time yet. I need to get the things ready for the medics visiting.

0815hrs: The Willmott-Dixon Oberstgruppenführer arrived to check I was in, and kindly arranged for the painter chap to call to finish the balcony for me. Fifteen minutes later the bloke came, and it seemed five-minutes afterwards had finished the job. It was likely fifteen, though. Thanked him and off he poddled.

Took two photographs from the balcony. I got a bit wet when opening the glass windows.

Had a bit of a clean around in the kitchen. I opened the packet of Dettol antiseptic-impregnated cloths, and boy did I get a surprise and further shock at the EIBWBBBs determination and courage…

Just how did they get inside this sealed pack? I’m beginning to get some admiration of these little beasts hardihood, tenacity and courage! 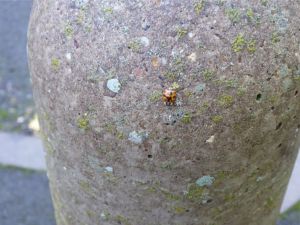 Computer off I got the right spectacles on, hearing-aids in, a jar for the recycling bin, two black bags for the waste chute, nibble bag and had a last SSWW. Set off out into the drizzly cold morning.

I had a talk with the Ladybird bug on the concrete post outside the foyer, as I dropped off the lat and bag of recyclable waste. Hehe! 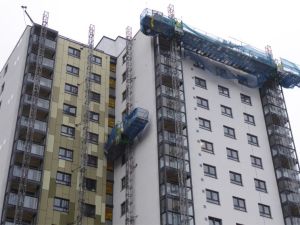 I took this photograph of Winchester Court, with the Willmott-Dixon lads looking busy on the hoists.

I popped in the Nottingham City Homes, Winwood Flats, Sturmbannführeress Wardens Temporary HQ, Toilet, Sarcasm & Insult distribution area, Rumourmongering Clinic. Tenants Socialisation Shed. Telling Inchcock off zone. Things like china and pottery to be stolen from, and residents room. Dropped off some nibbles, had a chinwag with Angela and Roy, then out to the bus stop. More nattering and laughter enjoyed before the bus arrived, and was filled with about fifteen of the Winwood Heights residents. They all dropped off in Sherwood, I stayed on to go to get some bread and visit the Mallards in Arnold.

I dropped off of the bus and into the Sainsbury store for a plod around and get some Sourdough bread.

I got carried away, like a child in a chocolate factory as I plodded around checking out this and that aisle.

However, when I got to the bakery section, I was disappointed in the Sourdough bread. A wide selection, yes, but my not having an electric saw, and the hardness of the loaves prevented me buying any. I got some soft cheesy topped cobs, though.

I came out with the cobs, mint sauce, a bottle of smokey BBQ sauce, a turnip, Ciabatta bread for Jenny and sunglow tomatoes. Also two items, that I should not have bought at all, and I felt guilty afterwards. Limoncello desserts and Anya potatoes. Shame on me! 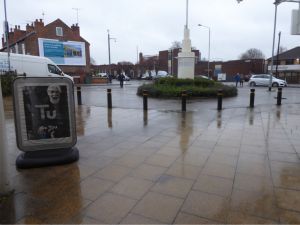 I paid the man on the till, and as I went to walk out of the store.

I got a visit from Shaking Shaun. This was not good and prevented me from walking to the park to feed the mallards. I decided to rest for a while under the cover to avoid getting wet as well until Shaun and the rain stopped. 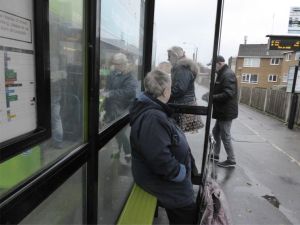 I arrived at the bus stop later, and stood in the corner of the shelter, in case Shaking Shaun returned.

I felt a little confused as well. This does not usually happen when I am afflicted with the dizzies.

I had a long wait for the bus and began to feel a bit better. 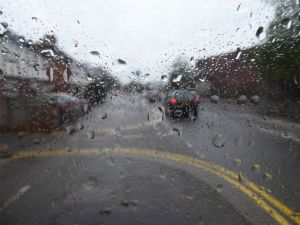 Caught the bus just in time before the rain poured down.

Dropped off in Sherwood and caught another bus down into Carrington and the Sherrington Park Medical Practice. Had another visit from Shaking Shaun as I went in. But this was only a short one, and not so bad at all.

I was seen straight away. I had the leg bruises inspected. Various tests were done in the nurse’s room, by a nurse I had never seen before. They seemed happy with the results, but of course, the INR Warfarin level result will not be back for a day or two. I was asked a lot of questions and told I would get an appointment to go to the Queens Medical Anticoagulation and Deep Vein Thrombosis Clinic. New pro-tem dosages for the Warfarin. I must remember to go back tomorrow. 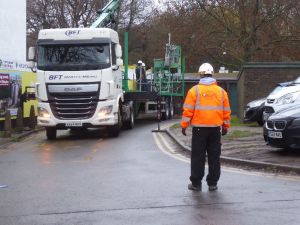 I got back to the flats, still feeling a little out-of-sorts, and snapped this shot of Willmott Dixon’s Ian Incharge supervising the loading or unloading of a wagon on the road where the bus has to go round.

The site at Winwood Heights is a nightmare logistically, but I reckon that they have coped well under the circumstances.

I got into the flats, drained. Got the Health Checks done

As I stood looking out through the window, I thought I’d take a picture of the glass in the balcony, to show you the gaps between the four panes of glass. Cunningly designed to let in the Weevils, wasps, ladybugs, leaves, rain, snow, sleet and hail. Hehehe! Don’t know why I’m laughing, all that glass to be cleaned! 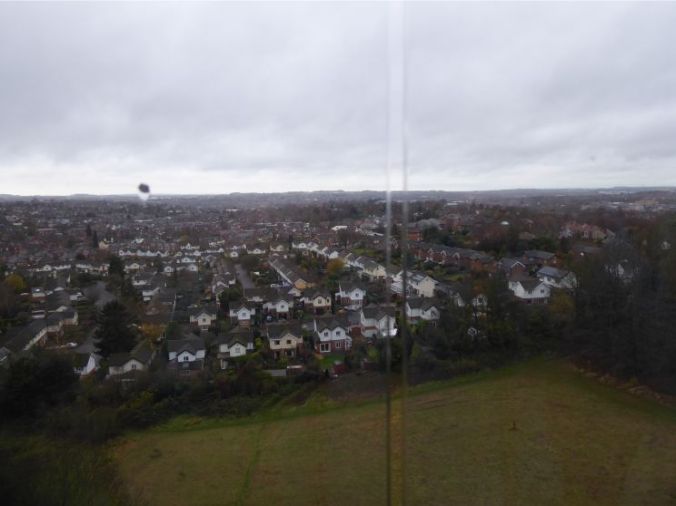 The view is beautiful, though. Makes it all look quaint and picturesque, do you think? I purposely missed off the tree path where Frank was mugged. At least the rain had stopped now. 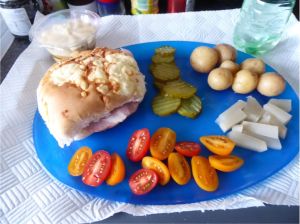 I pottered about and got the nosh ready. No bother or hassle with this plate preperationing.

The turnip I cooked in the slow cooker with the potatoes with just sea salt, tasted right gorgeous, in fact, everything was okay, apart from not being enough to feed a fly. Hehehe!

I added another cheesy topped ham filled cob to it later. Naughty!

Went for an SSWW, and took a look at the mystery leg bruises enigma. Clearing up well now, but how and why they appeared is not clear to me.

Got the Health Checks done and washed the pots up, had another SSWW and flaked out in the £300 second-hand recliner to watch the end of a DVD I’ve been trying to stay awake to view for some days now. Haha!

2 thoughts on “Inchcock – Wed 28 Nov 2018: A day in which at times I believed I was going insane, bonkers, demented, cuckoo or off my rocker. With maniacal moments in between. Humph!”