Willmott-Dixon workers at the flats. Hehe!

01:25hrs: I was once again a different person when I bestirred. The mind seemed to be taking a break from activity. The only concern felt, was to get the diary updated so I can find time between the two deliveries: Asda Walmart 06:00 > 07:00hrs, and Morrisons which should be coming 08:00 to 09:00hrs, and get the ablutions completed, and the raffle prizes and nibbles sorted ready for the Social Hour.

I was soon out of the £300 second-hand 1986 rickety recliner, and into the kitchen to get the Health Checks done and take the medications. Oh, and to make a brew.

I caught my reflection in the little mirror (a nasty experience at any time for me!) and saw that the bruise I got in the Dizzy Dennis tumble last night, was far less onerous looking than I expected. It only hurts if I bang it on something, then just a tiny bit. I did a silent prayer for no dizzies again today. I’ll try not to headbutt the sink edge on my way down to the floor if it happens again. Haha!

Got the Health Checks completed.

I had an SSWW (Short, sharp wee-wee). Then got on with updating the Wednesday Diary.

Emptying the saucepan that I was boiling water in yesterday when I left the hot tap running to go cold, I dropped the dang pan. How it slipped from my grasp, I don’t know. But I do know it landed right on the corn on the left foot! I also know I silently used some naughty words and offered myself insults and personal abuses for being such a Klutz! Humph! They say things go in threes: I’ve got the bruise on my head, now the pained corn and foot, and an aching back and knees from getting down then up again, after cleaning the mess I’d made… wonder what will come next?

When I think of it, my bad-luck is diuturnal in nature so anything can occur in the Whoopsiedangleplop and Accifauxpas arena at any time. Tsk!

I finished off the Wednesday Woes, and tool another SSWW. No signs of needing the use of the Porcelain Throne yet?

The Asda (Walmart) delivery arrived, and I stored the items away.

Summoned to the Porcelain Throne, I visited the wet room, and another normal passing was achieved. No bleeding. Good!

Next, the Morrison delivery arrived. Getting this pile of things away took a bit of ingenuity in finding room in the cupboards, fridge, and freezer, but I managed it.

0735hrs: I could hear noisy, banging and tapping, but could not locate where the sounds were coming from?

I got the mushrooms, carrots, and peas in the crock-pot. With the aim of making a Chill-con-carne of sorts later in the day by adding red beans and seasoning.

I got the pressies, nibbles and raffle prizes gathered in the bag, and set off out. Taking the black bags to the waste chute on the way. 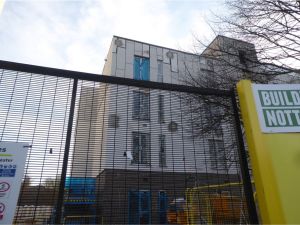 I dropped the white bag of recyclables near the caretaker’s door that was being replaced by a workforce of six men.

I took this picture on the right of the Winwood Court, through the compound gate.

I met Frank on the way, he looked a little ruffled, bless him. HE did his usual good job running the raffle again for the folks in the social meeting.

Then I met Riechsführeress, Warden Deana on Chestnut Walk going in the opposite direction. But of course, I have been forbidden from mentioning any communications I have with any Nottingham City Homes personnel,  Obergruppenführers, agents, or ghosts, on this blog. So, I won’t.

Not so many scallywags there today at first, but it soon filled up and gay time seemed to be had by all. I enjoyed some chinwags, exchanges of insults and tom-foolery with many residents.

Jenny seemed a little under the weather, bless her. But she kept a grip on us all. I handed out a few Christmas nibbles and treats.

I left a tad early, to get back and take some painkillers as the head was stinging and throbbing a bit.

I hobbled back to Woodthorpe Court with Nora and Lynne.

Who, after I asked them, kindly posed with the flats in the background so I could post it to the TFZer site later.

It was cold out there, as you can see by the sensible clothing being worn by the gals.

As we entered the foyer, I noticed that both washers were free. So after a natter with the lasses, I got up to the flat, took a pill, and collected the washing and down again.

Got the washing going.

Up to the apartment, checked the crock-pot and started to update this blog.

Down to move the things to the dryer. Mo and Gaynor were sat nattering, so I joined in, and we had a laugh or two. Love it!

Back up and carried on with the updating on WordPress, until it was time to go down again. Down to collect the clothing. Mo was still there, she was going to move Nora’s washing into the dryer when I moved my stuff out of it.

Back up and got the togs put in the airing cupboard.

I moved the crock-pot contents to a large saucepan and added the red beans, tomato passata, and onions. Going to be a little different this meal I think. I’ve put mushrooms, carrots, and a few peas in with my imitation chilli-con-carne – I hope it comes out alright.

I went on TFZer Facebook to add the photos and read any comments with other peoples posts.

Got the nosh served up, here goes, I’ll soon find out if it is okay or a disaster. Fingers Crossed.

Great Flavour! Ate it all up with some sourdough bread. No guilt, it was terrific! 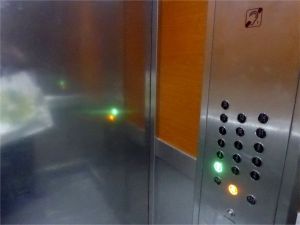 Washed the pots up, did the health Checks and back on the computer, cause as I photographed that amazingly flavoursome meal, I realised I had missed off a picture I took in the lift.

A slightly eerie shot do you think?

In the morning after having a dream, I used this photo as a background to my morning thoughts and did a funny ode. I was so pleased with it, I posted it on its own.

I had hoped to stay awake long enough to watch a Hustle episode that I liked, on channel 40 at 08:00hrs.

I was asleep about 18:00hrs, I recall the starting screen and music coming on for Heartbeat at that time, but nothing after that.

In my reverie, I had a dream of my talking with Old Father Time!

Onward into the unknown!