00:08hrs. I bestirred, feeling tired still, and gently moved the limbs and joints of my poor old body… The fluid retention was still testing the limitations of the resistance of the skin in the legs and ankles. I found that my usually scrawny fingers had swollen a bit too. I didn’t fancy the walk to the surgery later for the wickedly timed 09:00hrs appointment with the doctor, then another blood test. But, I think the exercise is needed overall.

I had to laugh when I lowered the £300 second-hand rusty recliner, the legs were so heavy with fluid, the thing ‘clunked’down with a thud! Hehe! I escaped the clutches of the recliner, and poddled carefully to the kitchen, with the intentions of getting the Health Checks done.

But, I was side-tracked by a call to the Porcelain Throne, so, off to the wet room. Massive evacuation, a bit of bleeding… but worst of all, the little boils on the bum seemed to have increased in number. Worra life, gerrin’ old! Then I discovered the Little Inchies Fungal Lesion had been leaking again.

Cleaned up, to the kitchen. Oh, dearie me… When I did the washing up last night, I placed a cleaned saucepan on the hob, and had not turned the power off! Luckily, it was left on the lowest setting. I even managed to save the pan for a change and cleaned it up. Rather pleased with my effort in this.

Ah, the papsules had returned to my left hand! I’m getting fed up with all these sudden ailments coming at the same time! The Papsules back, Haemorrhoid Harold bleeding, the fluid retention, Little Inchies Fungal Lesion flowing again, Anne Gyna, Reflux Roger, etc.

However, the knee and ankle giving way had not happened for a few days. I assume that the fluid crammed in the legs is preventing it? Hahaha! Hey-Ho!

At last, I got around to doing the Health Checks.

I think the resulting readings were fine this time. Guessing really, Hehe!

I’m assuming the fluid retention is the reason for the increase in weight?

I noticed that this month Cetraben emulsifying emollient cream, had a new warning on the

Flammable Keep your body away from fire or flames after you have put on the medicine dressing and clothing in contact with this product are easily ignited by a naked flame!

I got the computer on and checked the Emails first in case any appointments or messages had come in from The GUM clinic or other of my medical second-homes. Hehe! I got this one from Sherrington Park Medical Practise:

So, that’s been Monday, Thursday, and today this week, and now I’m booked in for next Monday. I’ve had calls from the ADVATC Anticoagulation Deep Vein Arterial Thrombosis Clinic as well. Might the end be nigh? Hehehe! Fret not, though. ♫’Que sera, sera’♫, there is more in life to worry about than death! Anyway, I’m not ready yet. Haha!

I set about updating the Thursday written narrative. Got it finished and posted off, then started this blog off. Visited the WordPress Reader section. Went on the TFZer Facebooking. 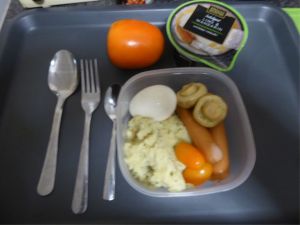 Got some breakfast nibbled.

Off to get the ablutions sorted out. The cunning EIBWBBBs (Evil Ironclad Boll-Weevil black biting beetles) were all keeping their heads down, I didn’t see a single one?

Boy, were the legs well-bloated with water, or what? I’d just taken off my night socks. The limbs look ready to burst open. Hehe!

Then hurried and scurried around getting ready and off to the surgery.

It was about 0800hrs as I left the flats, but it was still a little murky looking out there.

I place my big white bag of recyclables near the caretaker’s door. To the left of this photographicalisation, taken as I set off!

As I walked along Chestnut Walk, I took this 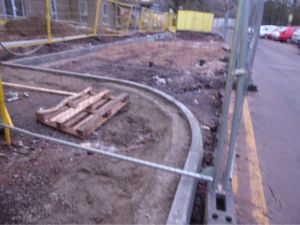 photograph on the right about, of part of what will be new parking spaces for the better-off of the inmates with vehicles.

As I got ready to take a shot of the Winwood Extra Care and Winchester Courts, Obersturmbannführeress Deana came out of the Nottingham City Homes, Winwood Heights,

Generaloberstesses Wardens Temporary HQ. WC, Rumourmongering Clinic. Sarcasm & Insult distribution area. Tenants Socialisationalistic Area. Telling Inchcock off Zone. Crockery and pottery to be stolen from location, and residents porta-cabin. We exchanged a few words, had a laugh, and I went back to taking the picture.

As I turned right, down Winchester Road Hill, the colouring was much different to yesterday, and the daylight seemed to arrive quickly.

I plodded on down the road, and on to Mansfield Road.

Were I nipped into the Continental Store to get a loaf of their excellent, but very expensive sliced bread. I came out with the sliced bread,

some cooked meat to go on it and a beef tomato. Now all I need is some potato curls from Lidl and a bottle of liquid soapflakes from Wilko.

A few more vehicles and Nottinghamians about this morning compared to yesterday. At the traffic light junction with Haydn Road, I thought the view related to how I felt for some

reason, I forget what it was now. Tsk!

A little farther up the hill, my first Nottinghamian Pavement Cyclist was espied on the other side of the road. A long way off, but the zoom feature on the camera allowed me to catch the little scallywag!

He was extra naughty, as he swerved towards me as he shot by! Git!

Up and over the hill and down to Carrington and the Sherringham Park Medical Practice. My second home. Hahaha!

I got inside and handed the receptionist the appointment letter that Nurse Ann had printed off for me yesterday. A gentle frown appeared on the angels face, and after a quick clandestine word with the other receptionist, I was told to take a seat, which I did. I got out the Clarkson book and had a good read before Doctor Vindla came to fetch me into her room.

As I struggled to get up and wavered a bit, my bag caught the decorated Christmas Tree, and a bauble fell off and into my bag!

In the surgery, I was told the blood test for today had been cancelled, and the Monday appointment is still on.

I explained my concerns, and the ever-patient Doctor gave me an examination or two. She checked my legs and asked questions about them. Regarding my memory and dizzies, she arranged for me to visit her on Monday, before the Blood Test with the nurse, she warned me it would be a lengthy examination, and made it for 11:20hrs. (Fungal Lesion?) She then sent a prescription electronically to the chemist, for some Furosemide PhEur tablets. A warning notice:

FDA warning: Liver function warning: This drug has a black box warning. This is the most serious warning from the Food and Drug Administration (FDA). A black box warning alerts doctors and patients to drug effects that may be dangerous!
Furosemide is a strong diuretic (water pill) that helps your body get rid of excess water. It does this by increasing the amount of urine your body makes. If you take too much of this drug, it can lead to very low amounts of water and electrolytes in your body. This can cause dehydration. Your doctor will monitor your fluid levels and may change your dosage based on those levels.

Low blood pressure warning: This drug can cause low blood pressure. Symptoms include feeling dizzy and faint after standing up. If this occurs, move slowly when changing positions after sitting or lying down. If this problem continues, call your doctor.
Low potassium levels warning: This drug can cause low potassium levels. (Potassium is a mineral that helps your nerves, muscles, and organs work normally.) Symptoms include tiredness, muscle weakness, and nausea or vomiting. Call your doctor if you have these symptoms.
Low thyroid levels warning: High doses (over 80 mg) of furosemide can cause low levels of thyroid hormones. If you’re taking high doses of this drug and have symptoms of thyroid problems, call your doctor. These symptoms can include: tiredness, weakness, weight gain, dry hair and skin, increased feelings of being cold.

I will get an appointment from the QMC within six weeks. (Not sure what this is was for?)

I thanked her, and left on my way to the Carrington Pharmacy, to collect the Furosemide. When I told them about the thermometer, I’d bought from them yesterday, the fact that I had to keep buying cover cones for it and I could not hear the supposed two tones, even with the machine inside my ear! The Pharmacist came over, and what flowed from his lips about my thermometer complaint, was pure genius! Admittedly on their own, the facts he stated were absolute gobbledegook, gibberish, balderdash and mumbo-jumbo, but his use of double-talk and his timing were perfect, to bamboozle even an educated person into believing his jabberwocky, let alone an idiot like me. Admiration flowed, as I departed the Chemists and went off to Lidle for a nosey around. I got the curly fries as planned, some mushrooms and a bottle of bleach.

Paid on the self-serve till, and caught a but back to Sherwood.

When I dropped off the bus, I wondered if Holland & Barrett had any of the French Chestnuts in stock. I know they are ridiculously costly, but they are gorgeous. I popped into the shop, to find they were selling them at Half-Price! I weakened and bought every jar they had left, all four! £3.50 down to £1.75!

Then over the road and called in the Wilko Store for the liquid soapflakes. Then into the next two charity shops, but I didn’t buy anything. 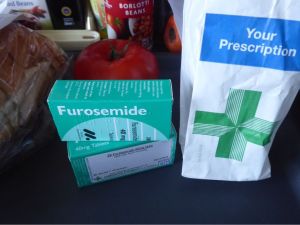 Up to the bus stop, to be joined later by Doreen. A natter and laugh on the way home.

I got the things put away, turned on the oven ready for the curly fries later, had an SSWW, and put half a Furosemide tablet in the evening’s dosage pot with the other ones.

Got stuck into updating this blog.

Got caught up to here, and the weariness downed.

So, I got the nosh sorted out. The Lidl potato curls were seasoned perfectly to my palate. The chestnuts tasted A1, and the pork and tomato sarnie was as good a one as I’ve ever had! Flavour rating of 9.45/10 given!

I soon ate it all up, not that there was a lot of it for once, and I made another sandwich up.

Sat down again to eat the new sarnie, and watch a ‘Frost’ DVD… I woke with sarnie still precariously balanced on the folds of my stomach and the TV still on!