01:05hrs: Woke up after six hours uninterrupted sleep, feeling a lot better this morning. The customary wee-wee had to be taken, I used the Emergency Stand-by Grey Bin. Which had some content in it, that I could not remember doing? No pain with the releasing of the fluid. In fact, it was a VSWWW (Very short-Weak-Wee-wee).

The freeing of the horrendously bloated stomached body from the £300, c. 1968 recliner was done with ease. Oh yes! I took the grey bin to the kitchen with me for cleaning and disinfecting. That done, I got out the hypodermic, wax softener, and sphygmomanometer to start doing the Health Checks. I had to nip to the wet room for another wee-wee, again of the VSWWW type. Washed the dandies and wiped the contact surfaces with Dettol, and back to the kitchen and the Health Checking.

Well satisfied with the resulting figures this time.

Well, apart from the high pulse continuing to go up and up. I half-expect that I’ll blow-up at some stage later today. Hehe!

Then I needed to have a third VSWWW!

After which I had a look at the leg wound. I have to say: it looked a lot better. It felt better too!

Yes, it does look like a new growth is coming up to the side of it, but it looks far less tender and vividly coloured. Then I realised that this may be due to the fact that I’d just rested it overnight.

So I resisted getting excited and waited until later when I’d been on the pins a while and make another assessment then. The feeling that I had worms inside the leg continues, but not hurting. It would be so typical of my luck, that by the time I get the appointment for the treatment clinic, it will have gone down! Schlimazel!

Took the medications and updated yesterday’s diary and got it sent off to WordPress.

Went on the WordPress Reader section.

Then I got some cornflakes for breakfast and watched some Youtube clips.

Got the ablutions tended to.

The mystery of the missing toothbrush remains. Good job I held on to an old one.

Got dressed, made sure the camera was taken with me and set off to go to the surgery for the Warfarin Blood test, then to the City Centre to take some photographs from the Nottingham Wheel cage.

I dropped into the Nottingham City Homes, Winwood Heights, Hauptbereitschaftsleiteress Warden’s Temporary HQ. Sarcasm & Insult distribution area. Tenants Socialisationistical Meeting Shed. Telling Inchcock off Zone. Where things like crockery and pottery get stolen from, Rumourmongering Clinic, and somewhere to rest while waiting for the bus, Portakabin. Warden and Opera singer Deana and International Champion Gymnast Warden Julie were working away in the office and holding cell. I paid for my TV licence while I was there. Mind you, with falling asleep so regularly when I try to watch owt on the box, 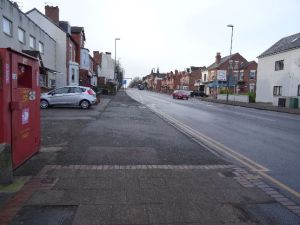 I’m so glad I now get a cheaper licence. Hehe! Thanked them and set off at a fair pace, to hobble to the Carrington and the nurse.

The walk to the surgery was only hampered by two things. One, Back-Pain Brenda, who eased off when I got to the doctors.

The other, as I got to the crest of the hill on Mansfield Road to go down into Carrington, a

damned ignorant, antisocial, bullying swine of a Nottinghamian Pavement Cyclist made me jump as the moron shot by me from behind and made me jump. You can see him in the distance here.

Then, moments later, another one of the Pavement Cyclist actually hit me with his handlebar – and this one was pushing his bike on the pavement!

I arrived at the surgery and logged in with the receptionist. Sat down and had a go at the crossword book.

The leg wound thing started to hurt after I sat down? Then the cheering and delightful, uplifting sound of Nurse Nichole calling me to follow her arrived. As she took the blood for the INR test, she kindly explained some of the things I can expect when I eventually get to the medical centre to had the wound/infection looked at, and have the compression socks fitted. She also told me this usually takes two to three weeks after they test the sample. And advised me to keep the current socks pulled up above the wound at all times. I thanked her and handed over the nibble treats. Handed some to the receptionists, said my farewells and out to the bus stop to catch one to town.

I thought it seemed a bit nippier in the City Centre. I made my way straight down Queen Street into Slab Square. Went to the kiosk for the Nottingham Wheel ride, and when I’d paid my £6 Concession fee, I remembered last year and how I struggled to get up the steps and into the cage.

I struggled, even more, this time. An attendant chap kindly came half-way down the steps to assist me up. I did feel a fool!

The plexiglass was filthy, smeared. The weak cold sunshine and reflections ruined many of my photographs.

Each time my cage got to the top high up, the winds would blow the cage all about, making steady photograph taking a case of pot-luck, and on some turns up there, impossible!

Still, it made a change.

Here are a few of the resulting photographicalisations wot I took! Hehehe! After having to discard many lousy shots.

In the morning, I made a post of all of the pictures taken and sent it off to WordPress. Please click here to see it, I fank you!

I exited the ride and somehow got down the various sets of stairways and onto the Slab Square and terra-firma. Off up to the bus stop and waited for the L9 to arrive.

My mind went into one of its daydreaming-modes. I thought about Sister Jane, and that led to other memories of the old Meadows area of Nottingham. An Oxo cube in the basin for dinner, Dad, school, poor Mr Holmes, Mr Widdowson, Chris Wright, the debt collectors searching for Mother, the tin bath on the train wall outside with the WCs and coal-houses in the yard. Oh yes, the meditation of good and bad times was actually enjoyed. No feeling I was hard done by. As I came out of the daydream…

I noticed the L9 bus pulling away from the bus stop! Klutz! So, I walked down, and fifteen minutes later, I caught the next 40 bus.

Got into the flat, and realised I had not had a wee-wee for hours and hours, and didn’t need one now. This surprised me at first; then I remembered I had not taken a Furesomide tablet.

Hunger now dawned, so I set about making a nosh. A fish meal.

The last of the milk roll bread to soak up the sauce and make fish finger sarnies to eat. Hehehe! 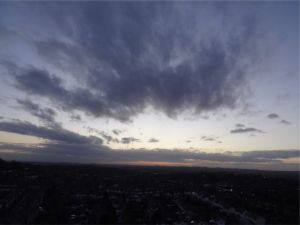 I took the meal things and washed them up.

The evening sky almost looked like artwork, I thought.

Once again, I planned the TV viewing that I fancied. Why do I bother!

Boon, Pie in the Sky, Law & Order and Sliders.

I didn’t get halfway through Boon before I’d nodded off! I got a bonus when I woke up later and saw the last two minutes of Pie in the Sky, though. Hehe!

But the old fool got nervous, as the wind blasted through the cage and it to swing to-and-fro, thus, rocking the boat as if to put it!

He did not like the dirty smeared plexiglass windows.

But loved taking the photographicalisations, using his old Sony camera.

I’m not sure I will be capable of taking these view shots next year.

It was hard work climbing up and getting into the cage this year.

Mind you, getting back out and down was just as bad, no worse! Hehe!

A least the cost hadn’t gone up, still £6 for us pensioners.

Shame about the rocking in the wind and dirty plexiglass.