22:35hrs: I had to give up trying to get to sleep. A new aching from the innards and the CIDP affected right arm kept shooting all over the place. And I needed a wee-wee! I dismounted the £300, second-hand, sickly-beige coloured, rusty, c1968, rickety recliner, and used the EGPWWB (Emergency Grey Plastic Wee-Wee Bucket). It was taking so long to get rid of so little liquid… then after several minutes of struggling and urging,  it was as if someone had suddenly turned on the tap! Blimey! Splashbacks and pain! Oy Yay!

When I went to the kitchen, I was surprised at first, not see any handwashing hanging up. Then remembered I was too shattered last night to do any. It was too early to take the medications or do the health checks – so I must remember later on in the morning to do them. I got the kettle on, It was still raining outside, but far less than earlier on. Made the mug of tea, and as I returned to the flea-pit room to start the computer, I needed another wee-wee. A different style this time, a WYSAO (Weak-Yet-Spraying-All-Over) wee-wee. And no sudden surges in power this time.

Got the computer on, and checked the emails. An Email from the Nottingham Post Newsdesk informed me of this gigantic breakfast now on sale in a Nottingham restaurant or cafe somewhere. The most copious breakfast that is available in the Midlands it said. I can believe it too! Flipping heck, surely that’s not made for one serving? It looks tempting, though! Haha!

The new tummy-ache kicked off as I started to update the Wednesday Diary. When I take the medications, I’ll take an extra 5mg Ramipril, that might settle the innards for me. I pressed on, the fingers, hands, etc. had all calmed down from last night. I was well pleased that the arm was no longer doing it’s flying out all over the place. If it had been, I wouldn’t have dared go on the computer – cause sure as eggs are eggs, the arm would have done its impersonation of a Hitler salute, and might have hit the touch-screen!

A couple of hours or so later, I got the post finalised and sent off to WordPress.

I had another WYSAO wee-wee, and had a rinse and made another brew. Then took the medications, and got the machine out to do the health checks. The sphygmomanometer worked on the third try. The readings were fine again. But the body temperature was a little low, still, at 34.1°c. I think so anyway, I keep forgetting what it should be, so I might be wrong; it has been known! Hehehe!

I remembered to take the extra Ramipril alright – then realised they are for the BP, not a panchymagogue. What an Idiot! So I had a couple of extra

guzzles of the mostly inefficacious, no good to Gundy, Peptac. I did feel a fool! Which, of course, is a regular happening.

I had a check on the Morrison site, to see if they have any of the West Country butter in stock for Jenny and Frank. If so, I’ll do an order.

Nope, Out-of-Stock again! So, with Jenny & Frank being away for a while, I’ve time to try again later and can keep it in the freezer for when the return. That is if Morrison ever manages to get any back in stock before the Special Offer finishes! I wouldn’t be surprised if they don’t get an more, though. It is an excellent price, and must be in great (unsatisfied) demand from hundreds of customers who also cannot get any! This way, Morrison’s can claim their prices are lower. Of course the won’t actually sell any, but still! So, no order from this Nottinghamian!

I then went on CorelDraw to do a couple more graphics to use and saved them.

Then started this blog going.

Then made up some templates for the Inchcock Todays. Stomach still rumbling, grumbling and churning a bit? Brekkers time, corn flakes and a mug of tea, methinks. 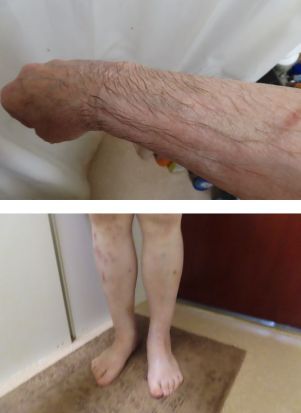 The ablutions were sorted. No teeth-cleaning or shaving cuts suffered! Only a razor, once, and the soap, twice, were dropped from the CIDP affected hand. The shower head was not dropped at all today.

Although it didn’t show up in this picture, I’ve no idea why; but the veins showed up dark blue, almost black and bulged, in the right arm while showering myself. Well, there’s no one else to shower with! Hahaha! The pins were still thin, with far less fluid retention. And I could not see any new blood papsule, spots, bruises or blotches on the leg at all! Smug-Mode-Adopted!

While showering, I decided to have a hobble to Arnold. This walk used to take me about one and a quarter hours to complete. (Today, it took me three hours!)

Mind you, I was not rushing and had to stop a few times, thanks to Dizzy Dennis’s visiting en route. I was well-pleased with myself.

Surprised as well! Hopefully, after the stroke. Things are beginning to improving at last? Fingers crossed!

I took some black bags to the waste chute. Got dressed for the trip out. Tea shirt and sleeveless jacket on. Took the three-wheeler trolley and the umbrella, just in case. Not that I can control this guide when using a brolly, but I can stop and shelter if needed (It wasn’t).

A call to the Porcelain Throne was answered. Unsuccessfully on this occasion. Rock-solid again! No actual movement, just some wind escaping. Ah, well!

Down in the lift, with the trolley. No signs of any CIDP bother in the hands, arms or legs. Just the shoulder doing a bit of jiggling about now and then. Things were good!

Out of the foyer, onto Chestnut Way, over the road and up the gravel path to the park.

The day was perfect for a hobble, too. Not too hot, not a lot of bright sunshine. Getting up the footpath, needed a couple of stops, as Dizzy Dennis gave me some bother. But I put the brakes on and enjoyed the, oh, so beautiful petrichor.

I turned left at the top, down the trolley-wheel-grottifying, leaves, seeds, twigs and muddy walk-way.

The view across Woodthorpe grange Park to the North was beautiful. I took this picture on the left. I hadn’t felt so contented in ages.

But it didn’t last too long! 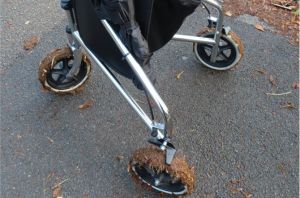 By the time I had reached Mansfield Road through the park, the three-wheeler wheels were in a right state again! No wonder I’m becoming a euphobiaphile. Good-luck never stays long with me, but I enjoy it while it lasts. Mishaps, misfortune, misery and misdoings, are more my thing. Haha! 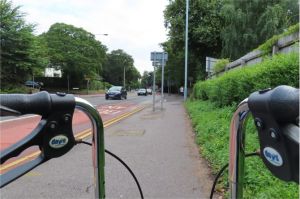 So, I cleaned the wheels as best I could. Then set out North. Along Mansfield Road. The lack of traffic on the roads had me thinking for a while. Then it dawned on me, that the ankle-snappers and drug-taking, alcoholic, car-stealing teenagers were off of school for their holidays. So, I slowly made my way towards Daybrook.

Dizzy Dennis called again to visit me. He stayed a little longer this time. But left me with no after-effects.

The weather really was perfect for a walk. Albeit a slow, rambling, interrupted one.

Along by Sainsbury’s and into Arnold.

I made my way to Worall Avenue, then down to Front Street. Where I called into the Saver shop, to see if they had any of the Colgate Foam toothpaste that I have started using. Got one for 99p! And, Erasmic shaving foam, and a roll of waste bags. Then made my way to the Asda Walmart store.

I struggled to carry all I had bought to the self-serve tills. I remembered to tell the assistant of the bag I bought on Monday, that had a large slit in it. She swapped it for a new one. There was no tutting or sneering from her, then again, this wasn’t a Lidl shop. A touch of sarcasm and Lidl-bashing there, sorry!

I bought far too much stuff to fit into the bag and pathetically small basket on the three-wheeled trolley. Serves me, right! The purchases: A bag of marshmallows, fresh tomatoes, mini cheese-pickle pork pies, rice, milk, bacon fries (2 bags), jar of beetroot (A different brand, in hopes that these will not be as hard as ball-bearing, like the Asda ones I bought on

Monday!), Sliced apples and a reduce in price triple DVD of The Men in Black.

The stomach began to grind again. I thought when I get to the bus stop, I’ll eat one of the mini pies. That may ease the tummy-twangs.

I paid up. And as I walked out through the doors into the alleyway and went over the drain covers… boy oh boy, the miasma didn’t-half pen-and-ink something rotten!

Walking up the hill to the car park, to get to the bus stop, and Dizzy Dennis gave me his last bot of the day. I had to pull-up three times on the steeper bits.

When I managed to get up to the Front Street bus stop, a lolly surprise! The old broken down bench had been replaced!

I took advantage, and got myself sat down. I opened the small pork & pickle pork pie pack – say that when you’ve had a few, Hehehe! Before I knew it, three of them had been consumed. Guilty-Mode-Adopted! On the bus going home to the flats, I ate another one of the pies!

As I got off the bus on Chestnut Way, the driver asked me to take some Metro papers to hand out, so I took some with me. I got off of the bus with the trolley and shopping bag, without any bother. I had a little few words with Cyndy and some other residents.

Going into the lobby, there was (I think), Gaynor, Mo, Brenda and Herbert sat there. “Would you like a Metro?” I asked each of them in order. The first three all said thanks and took one. Herbert, he just gave me a sneer and a humph, then waved me away, as he muttered something or other quietly!

I got in the flat and ate the last of the mini pork pies, as I put the kettle on. Oh, dear! So I decided not to have a meal tonight. Increased-Guilty-Mode came over me!

I got the hand-washing done, rinsed an hung up to dry. Then, I tried to do some cleaning in the kitchen, but the fatigue came over me. The stomach started to grind away again.

I got the medications taken, with an extra Senna tablet.

I settled to watch TV in unwavering faith that I would fall asleep. But no.

After a while, I got up to do the blog.

4 thoughts on “Inchcock Today – Thurs 1 Aug 19: Got out for a mini-marathon hobble with the trolley. The same route used to take an hour and a bit – now, three hours! But I did it! Smug-Mode Adopted!”