01:20hrs: I woke with that Reflux-Breathing-Belching erupting problem that started yesterday afternoon. It had vanquished every other ailment to the back-burner. Even the Peripheral Neuralgia was cowering and not giving me much bother. Which is more than could be said for the knees RAI (Rheumatoid Arthur Itis). Within minutes of moving out of the £300, second-hand recliner, a cough started to develop, that has got a little worse as the morning went on. Healthwise, thing were not too good. Up onto my feet, and RAI let me know he was a close second, in the hassle-stakes.

But, all the other stuff is okay, so, beggars can’t be choosers! (Is that the quote I wanted? It’ll do! Haha!)

A little Dennis Dizzy as I got into the kitchen, but nothing to worry about, over in seconds. I took a shot through the doorway without the flash, then one with it on.

I got the handwashing moved to the airers. Then to the not used overnight GPEB (Grey-Plastic-Emergency Bucket), and had yet another of the pitiable PWWDIB (Pathetic-Weak, Why-Did-I-Bother) mode wee-wees. Made a brew, took the medications with an extra painkiller, and off to the Porcelain Throne.

Now, this was consistent for the last few days, anyway. The superabundance of material evacuated, was still, well, colossal almost gigantesque! I don’t know why, but it’s been this way for about four or five days, now? I’m just glad the toilet is coping with so much and not blocking-up again!

The throat and chest along with Reflux Roger and breathing difficulties were getting yet worse, as I got the computer on. Then sharp painful intakes of breath began! The shoulder and fingers started to dance about as soon as I started typing on the keyboard! Humph! 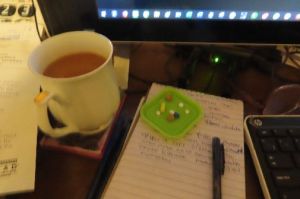 I decided to make another cuppa and take one more painkiller before struggling on with the blog. The knee pins, I got some of the Phorpain gel rubbed into them. Reflux Roger was persistent if nothing else this morning!

The tea went cold. So I ventured carefully to the kitchen to make another brew. Got the kettle on, and needed, urgently, (I thought), a wee-wee. So I rushed, well, limped pretty quickly back into the junk-computer room to the grey emergency plastic bucket… 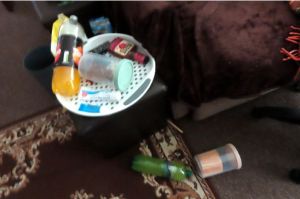 Oh, dearie me! On the way back, Dizzy Dennis caught me at the same time as the right nerve-dying leg, tried to do an involuntary Neuropathic Schuhplattler dance. No injuries, but I tumbled against the Ottoman, I didn’t go over at all, but the bang redistributed some of the things that were on the tray! And left me with only a bruised left-hand palm. So, quite acceptable. I’ve not seen the red ink pen since mind you. Haha! What a draycup!

Life seems to have me all farcockt, lately!

At long last, I got on with the Wednesday post. It took me hours, cause of the shakes, nerves, and dancing right side. I was quite proud when I did get it done, even though it took so long. Phew! Throughout the process, I had to have about eight PWWDIB wee-wees. Not passing enough water to fill a coffee cup in total! Humph!

Another mug of tea, methinks.

I took some pictures from the balcony on my tea-break. Roughly the same view. Apart from the last one. All taken in different modes on the camera. I diligently wrote them down in order, on the back of an envelope, which choice I had made… Took the shots and as I struggled to close the window, I dropped the paper! Fehl!

Ah, well, these things are sent to test us! I just wish they wouldn’t check me so often! Hehe!

I made a start on this blog. Then did some catching up on the TFZ Facebooking.

Well, fancy that! That’s sodded all the plans again! Thank You, Fries!

Flipping hard slow slog getting the Facebooking done! Over three hours. Thanks to Mr Fries! 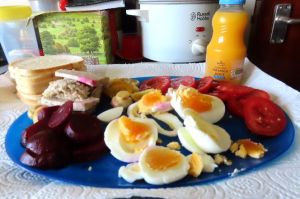 Late now, so, I’d better pack in, and get the nosh sorted out. No chips again, though! Oh, no! Three days abstinence. It’s not easy, you know! Hehehe!

After washing the pots, Reflux Roger and the tight chest convinced me to just sit down and try to fall asleep. But it wasn’t happening, so I put the TV on. A wee-weeless hours long period of belching and struggling for breath, and I had to rise for the Porcelain Throne to be utilised.

The same style as it has been for many days now. A massive, ‘Where-Did-That-Come-From’ evacuation again.

Back to the Brother-in-Law Pete damaged while he was flat-sitting, when I was in the Stroke Ward, and he fitted new CCTC cameras, and searched for my valuables, which he found and took, (I still haven’t got them back yet four-months later), £300, second-hand, near-dilapidated, gungy-beige coloured, c1968, sometimes working, uncomfortable, rickety, rinky-dinked, rattling, rusty, resurrected, reconditioned, recalcitrant, recidivating and rotting-away recliner. This time, heavenly sleep came to me, in no time.

This may take some explaining, I’ll do my best: I woke-up, almost convinced I was trapped in an underground cave, with writings of all my failures, mistakes, errors etcetera, writing on the massive cave’s walls, in beautiful italic handwriting?

This is what I had been dreaming about?

I thought I had nodded off again and returned to the dream (I think). I had some paint or whatever, and climbed a tree log, to reach and cover the words…

I woke, hanging out of the recliner, and found I had knocked things off of the recliner, and they had fallen into the GPEB! I just couldn’t leave the stuff in there. But getting myself upright and out of the chair, proved painful and RAI knee was not happy with me at all! I got the bottle of spring water, the packet of Codeines, the tub of Twiglets, all now soaking in the urine, and rinsed them in the sink, and bagged them ready for going in the chute in the morning. Cleaned and sanitised the GPEB and me. Annoyed, I returned to the recliner…

And stubbed the damned toe on the way!