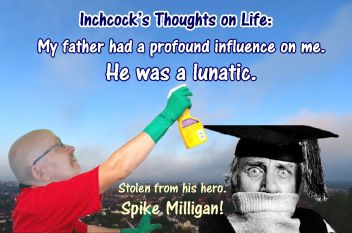 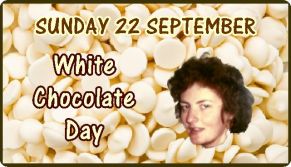 01:35hrs: I woke, thinking I had overslept for some reason.

The droning noise from somewhere outside must be driving the tenants with decent hearing, mad! It’s doing me no good! Tut-tut!

I fumbled to get my overabundant flobby-body free of the second-hand, c1968, horrendously beige-coloured, rusty, but working today, Brother-in-Law Pete damaged recliner while he stole my valuables while I was in the hospital after the stroke. I had a WWW (Weak-Wimpish-Wee-wee), then made a brew of Yorkshire tea.

This was when I discerned, it was only 01:35hrs! I’d only been asleep for about an hour-and-a-half! And much of that seemed to have been filled with nightmares!

I tried to remember them, and fetched the notepad, and found some scribbling on it, but most of it was indecipherable. Seems one dream was played out backwards, I was dead, lying in the grave, and falling or being thrown out of a window, worked back to being chased into a burnt-out destroyed block of flats… Puzzling! The other one, I only remember being afraid and in a plane or helicopter. The words I could read on the pad, were: Flying, beheaded (I think) and school?

I took the medications and got on the computer. With a determination to get caught up with the graphicalisationing, if possible today. I answered the comment and soon found that the fingers were not responding to touch very well. This made typing difficult.

On to WordPress, and had a session on the Reader. Then made up the ‘Day’ graphic on CorelDraw, above. With the fingers playing up still, it took me ages to get done! Next, I got the template done for this blog, then updated the Saturday see-nobody, chatterless post.

The breathing was uncomfortable. Involuntary intakes and outtakes, and the chest and throat felt very tight. The peripheral neuralgia shoulder, fingertips and hands were playing me up now. Looks like it’s going to be a miserable day for me, today. Well, fancy that! Haha!

I got the updating done and sent off the Saturday post. Added to the Pinterest page. Made another brew, Glengettie Gold this time.

The droning noise from outside was relentless!

I went on the TFZer Facebook for a while, I couldn’t stay too long, as the ablution time was nearing. 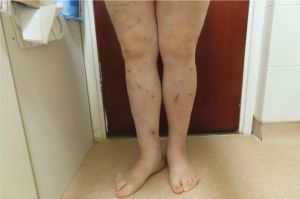 I managed a few minutes on YouTube before starting the scrub-up! A stand-up jobbie at the sink job.

The legs were looking a lot more colourful. But also they had accrued a good few more papsules, spots, clopidogrel scars and blotches, overnight it seems? I didn’t think to check elsewhere, I might have the measles as well. Hahaha! The dropsies were unanticipatedly few, considering how the hands and fingertips were. 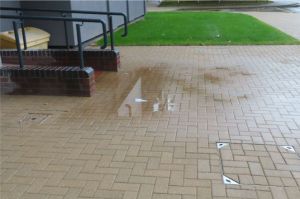 I took the black bags to the waste chute on my way out, to welcome, and to hopefully talk to, some of the new Winwood Extra Care Court residents, and take some photographicalisations of different area, and the rooftop plaza. I tried Josie’s bells, but no answer.

Now they have their alfresco furniture back out 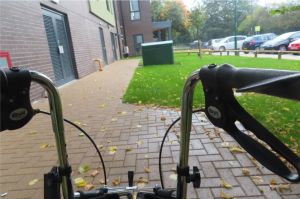 When I got out of the foyer, the drizzling was still coming down a little. The new brickwork is forming puddles already.

I kept stopping to look up at the grey sky, 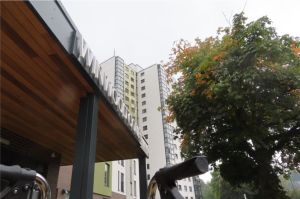 appreciating how it still looked marvellous, to me anyway, and getting splattered in the eyes (Hehe!),

At the Winwood Court Extra-Care Flat’s foyer, I stood for a while, pondering on nature, health, life, and Nottingham Forest and Burnley both winning a game. 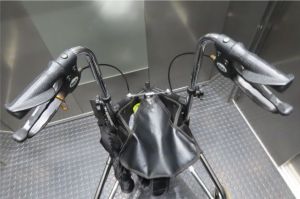 Then I took a shot showing Winwood, with Winchester Court in the background. It all looks very new, which of course it is. See how quickly I gleaned at? Haha! There are no flies on me, the zips broken! Harf, Harf!

Then into Winwood, and up in the lift, to the third floor. 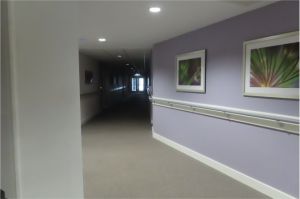 I popped out of the cage and took a photo of the corridor of the floor of flats.

I’d not seem anybody up to now, anywhere this morning. But I felt confident I would see someone to have a chinwag to up on the 4th floor, in the Winwoodonian’s perfectly arranged and laid out relaxation room. 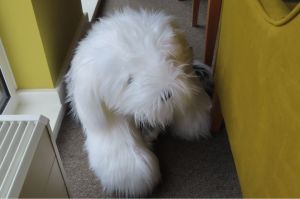 As I returned inside the lounge, the rain stopped altogether. No residents were seen around.

I spotted another ‘Dulux’ dog. Behind the easy-chairs, and he looked so real, it made me jump for a second! Don’t laugh! Oh, go on then! I moved the synthetic fur away from his eyes and took this picture. 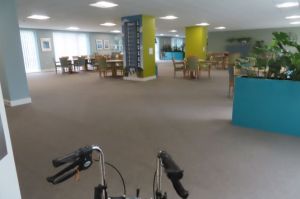 I popped into the big meeting room, but again, could not see anyone about to talk to.

I reckon the lights must be on a sensor motion control, cause they came on as I entered the room. Good idea, I like it!

I decided to go back to Woodthorpe Court, via the link-passage. Thought I’d try to find the 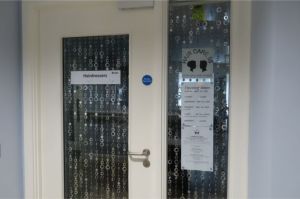 part-time hairdressers and podiatrist. It seems they are sharing the same room together. Handy, that is! I must look again later, and get the foot treatment prices on the list.

I mused on how to cook and present Josie’s cheesy potatoes as I rambled along the corridor. 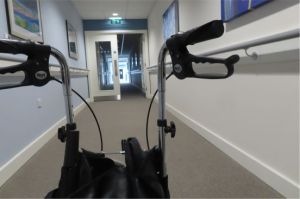 I stopped and turned around to take this photo, to make my way back a distance, so I could have nosey at their new laundry room.

As I turned, Dizzy Dennis gave me a visit. A long one too. But not a really serious one. I don’t think there was the slightest chance of me going over. The three-wheeler guide brakes were put on, and I had ten minutes or so recovery time.

All was okay again, and I went to peek at the laundry room. Blimey, it looks unused! No caked-on soap powder over the drawers. Very-most posh!

I pressed on back down the alleyway and into Woodthorpe Court. Seeing the new Winwood Court laundry room, I thought I’d take a photo of our old Woodthorpe Court one, just as a comparison, like. 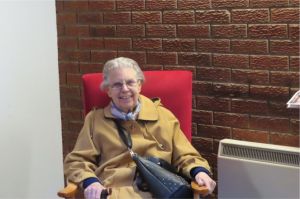 Angela was sat in the lobby, I asked Angela if I could take her photograph, and she let me. Which was kind of her! Then again, she is a lovely lady (Roy’s better-half!) I got a chinwag in at last, with Angie! But it had to be cut short Sob! Her and Roy, who I’d not noticed earlier, was outside the Foyer door, sat on his four-wheeler seat trolley, waiting for their taxi to arrive. 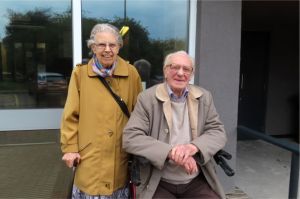 They both looked spick & spam and smart. I assumed they were off to meet some of there family. They were patient enough to let me take a shot of them both as the taxi arrived. Grand couple! 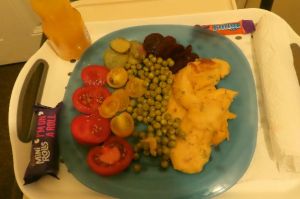 I got in and made a start on Josie’s nosh. Mixed Leicester and mature Cheddar cheese, butter, a pinch of salt and an iota of Basil, all bashed up for what seemed like three hours. Hehe! To make them as soft as I could, so she can digest them easily!

I got them on the tray, took the photo and realised I’d missed off the tuna! Schmuck!

Spot on 12:00hrs, I took it on the wheeled server to her door, and pressed her bells. But, no answer. I tried again, still no reply. I was worried, in case she had fallen in the flat. If she forgot, and or went out to meet her sister, fair enough, but I wished I knew. I gave it ten-minutes more and called again. Nope!

I nipped up the Cyndy and Eric’s flat, to ask them if they had heard of Josie being ill, and might have gone to her Sisters? But Cyndy didn’t know anything. She asked if I wanted to ring Warden Deana, but I resisted the temptation and thanked Cyndy, and apologised for bothering them. It is Deana’s day off, after all.

I came down and over the next half hour, tried Josie’s door four more times. The door is locked, so maybe she has just gone out? Worrying! I’m at a loss what to try or do, next.

I washed the cooking things up. and noticed a possible fire on the misty horizon.

As I got the computer back on to update this diary, Dizzy Dennis nearly had me off of the chair. I do hope the Geriatric Fall team call me soon!

Just sat down and I meekly felt sorry for myself. I did try Josie’s door a few times. I had her meal cold, in place of making one for myself. If she returns, I can always make her another one. 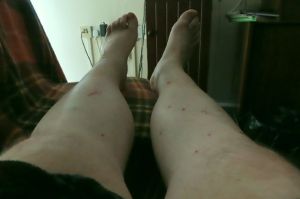 I took a photo of the pins as I lay there, in the Brother-in-Law Pete damaged while he was flat-sitting, when I was in the Stroke Ward, and he fitted new CCTC cameras, and searched for my valuables, which he found and took, (I still haven’t got them back yet four-months later), £300, second-hand, near-dilapidated, gungy-beige coloured, c1968, sometimes working, uncomfortable, rickety, rinky-dinked, rattling, rusty, resurrected, reconditioned, recalcitrant, recidivating and rotting-away recliner. Spotty Muldoon comes to mind! Hehe!

Yet once again, despite feeling so tired and worn-out, sleep did not come easily or quickly. But, with worrying about Josie on my mind? I pray she is not ill. Fingers-crossed, I hope to find out more tomorrow.