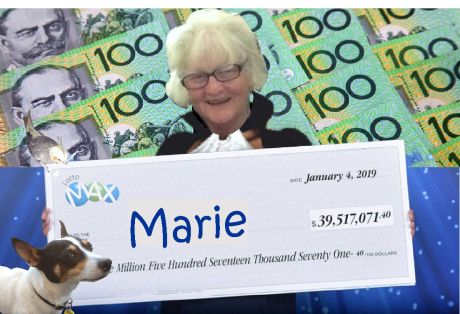 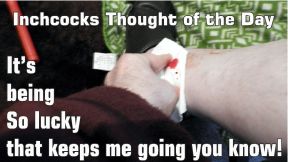 02:20hrs: I stirred, dreary-eyed, and found in the folds of my tummy fat layers, a page from the notepad, and as I looked down, a pencil dropped from behind my earhole. The reading glasses were hanging on the very end of my nose and fell off to join some (I found as I began to move), biscuit crumbs as well. Nocturnal Nibbling Guilt!

The scrawl on the paper was hard to decipher. Bits I could make out were, ‘dreams put in the blog’ and ‘wee-weeing…’ But unfortunately memories of having the dreams I’d apparently had were lost into the ether. They must have been interesting, or I would not have made the regrettably unreadable comments on the pad. Shame!

I went through the routine of getting up, catching the balance easily enough this morning. Noticing that the ankle ulcer was clearing up so quickly (Not complaining). The papule underneath the left foot was still tender, even though it had grown back on the bottom of the foot.

I tended to the Health Checks first.

The Harpin Xian Di Thermometer gave a good reading of 36.7°c, a very fair, in the green range result. Then, I got the sphygmomanometerisationing machine out to use, wondering if it will take a few tries to

get it to work today, and worked on the third effort: The SYS was still a little too high, but it’s been worse many a time.

As I took the medications, I thought I heard a noise coming from the hallway, I went to investigate. There was a letter on the floor at the door, but that must have been there from yesterday. No one would be posting letters at 03:25hrs of a morning, so that wasn’t the noise I heard. No signs of anything fallen was identified, so I returned, and got the medications taken.

Then I opened the letter. It was an eight paged A4 notification, from HMG (Her Majesties Government), Department of Health & Social Care. It consisted of the following: Guidance for the festive period – Shielding – Access to health & care – Important Information about Covid-19 – Access to Additional Support – Vitamin D supplements – Socialising -Care & Support – Tier 1, 2, and three rules to follow – Going to the shops and Pharmacy regulations. Whether or not I will live long enough to read and digest it all, is questionable.

But, Hatt Mancock’s… sorry, Matt Hancock’s end quote of “We will Continue To Support You in your efforts to keep yourself & others safe!” gave me a warm-glow of bile, that did.

I assume he may be talking about my not getting my prescriptions without a battle on the phone each month with the Chemist I must not visit, to get them delivered? Or being unable to get my toe-nails cut? Or the cancelled Oncologist – Cardiothoracic – Endocrinologist – Pulmonologist – Neurologist – Urologist and Audiologist cancellations?

Or maybe as is likely, he’s more working towards the next general election than actually bothered about us all. He feels a bit of creeping and ersatz care pretending now, belatedly shown will ensure the votes? Who knows? You can’t blame him! Hahaha!

I remember the then New health secretary Matt Hancock receiving £32,000 in donations from the chairman of the think tank that wanted the NHS ‘abolished’! Matt Hancock received nine donations between £2,000 and £4,000 from the man who heads the board of the free-market group, the Institute of Economic Affairs.

I also remember him, defending his spending almost £50,000 on takeaways for his staff from just one London restaurant during the peak of the Covid crisis. The Department of Health and Social Care (DHSC) spent a total of £47,528 on takeaways from Bong Bong’s Manila Kanteen earlier this year, a Freedom of Information (FOI) request has revealed. Just nine orders costing £43,348 were placed at the fashionable “Filipino-inspired” eatery during April, then another £4,179-worth of orders placed in March! Just thought I’d mention it!

I got the updating of the Friday post done quickly. Sent it to WordPress. Did some Facebooking catch-up, then on the WordPress Reader section. Finally, got around to site comments.

Made the first mug of Glengettie tea of the day, and had a bag of Frazzles with it, well, no time for brekkers, I have to get on with making the templates up.

I took regular breaks over the.. wait for it… seven-hours I spent, getting the templates finished! The first being for some brekkers, of sorts. I had a pot noodle, and some nuts to nibble.

Back on the template slog. 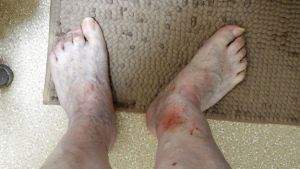 Turned everything off computer-wise, to let it cool down, and got the ablutions done.

The ankle was looking much better now, but had still got the odd itching, with it? Feeling as if worms or maggots were underneath the skin?

The session went safely enough, dropsies of course, and just the one nick shaving.

The medicating went so easy as well!

I got the clothes all washed and sanitised afterwards and hung them on the dreaded, not used now if I can avoid it, doing so by not wearing any socks, Sock-Glide.

I must make an order for delivery soon, I’m low on disinfectants.

I got the unopened old but ere new when I bought them, trousers on. They were classed as brown, but only just. Hehe!

They fitted perfectly. Well, what I mean is; The legs were far to narrow, my ever-growing, bulging, flabby-belly made it hard work to fasten the waistband clip, the pockets were too small, the cotton thread hung from the bottom of the legs, the belt buckle supplied with the trews broke. The bum fitted a little too 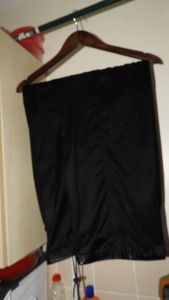 snuggly. Other than that, they were fine. Oh, and the back pocket had a hole in it!

I hand-washed the old black trouser, all done, done, rung and hung above the sink to drip dry.

Back to the templating. I got the computer going again, and got a message telling me that the hard drive is running low in space. I’ve no idea where the message came from, Microsoft, Google or the computer. After a few moments of frowning and fretting – the message disappeared? 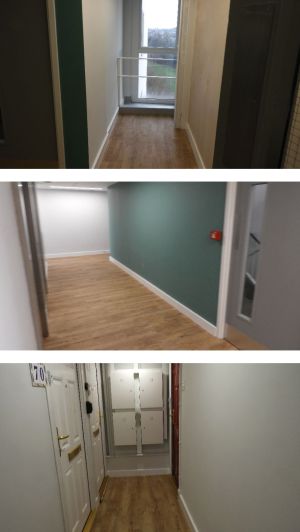 I took a breather, of sorts when it started to be a grind, rather than pleasure, in doing the CorelDrawing.

I made up the small waste bags, added them to the others in the box, and got them on the three-wheeler guide, and taken off to the waste-room and down the chute. As I got into the lift lobby, I used the Cannon (It’s far easier to use when on the move, cause it fits in the pocket, which the Nikon Bridge camera will not do, too big). The first one, the view as I entered the lobby straight ahead, the none along the length of the lift lobby, and one as I turned around and snapped the three flats lobby. Mine being the solitary single one on the right. It was eerily quiet out there! With no workers, no noise from Herbert, and even the blasted ‘Hum’ seemed quieter to me? 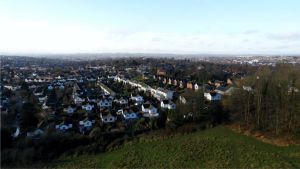 I got the bags down, in the process gaining a pretty deep blue bruise on the knuckles as I trapped the hand as the lid shot back closed.

Back to the apartment, and took these shots of the darkening day from the gallery.

Back to the templating again. I worked through uninterrupted for a few more hours. Got the templates finally finished and began thinking of what to have for my nosh. As I nosied around to see what was available, favouring doing the meatballs and potato shapes, to help clear the freezer, then I can free Jenny’s space up and fetch the meatballs she has kindly stored in her freezer for me.

Then it hit me, the usual late weariness, lack of concentration and feeling of being oh, so tired and worn out.

I decided against doing the meatballs, in case I fell asleep with them being in the oven for much longer. I got the potato shapes out of the freezer, and dropped the damned bag, catching it before it hit the floor, but a few of the shapes fell out. I noticed as I picked them up that the letters spelt ‘Thick’. (A link there somewhere?)  – Ah, clairvoyant potatoes? Hahaha!

the cooking. Nicolas’ Neurotransmitter had been so kind all day. Still, it now was causing some dangerous situation with the oven and saucepan, like. I took a photo and another close-up of the picturesque peeping pink evening view.

Getting the pasties and potatoes out of the fridge, I caught my right arm on the oven. Puggleclumpdimwit! Ah, well!

I got the fodder l plated, and was amazed at the fact that I’d just made this meal! I was so, out-of-it, and drained? I must have engaged auto-pilot—a taste-rating of 7/10.

Too was tried to bother doing the washing up, and I required Sweet Morpheus.