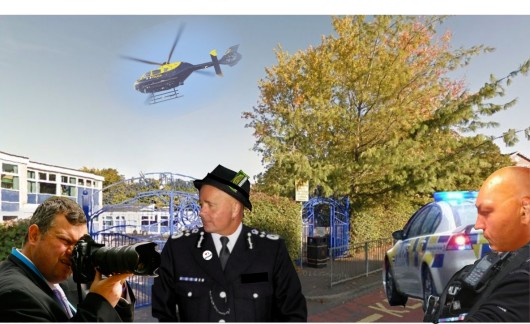 Police responded with dogs, helicopter, and ARV (Armed Response Vehicle) to a call for help, from the Sebastian Zulqurnain Junior School in Nottingham this morning at 0928hrs.

Officers sealed off all roads surrounding the school, apart from the one to the bookies and local pub. (Best not to upset the locals quoted the firearm bearing Traffic Warden Mike Steedenski)

A statement from the Nottingham Chief Constable Danny Soz-Poncemby said: “Twice last week, teachers and pupils reported suspicious characters lurking in the close vicinity of the school they knew they couldn’t be locals because they were not searching through the dustbins. It seems the same two have gained

access to the premises, and when the teacher demanded they left and they refused, a hostage situation then developed.”

Sergeant Gaztops wanted to attack the school with hand-grenades and nerve gas, but we managed to calm him down with a Valium and gin mix and a promise of sex with the schoolmistress.

Our reporter Juan Inchcock asked: “Do you think that the intruders might be paedophiles?”

The Chief Constable replied: “Oh yes, I’d not thought of that!”

He turned to one of constables in riot gear next to him and commanded him to get more support and call for another CPO (Community Police Officer) to attend the scene, as soon as he’d finished having his breakfast.

Talks ensued, with one of the children via their Samsung Galaxy S2 mobile phones and the police negotiator. 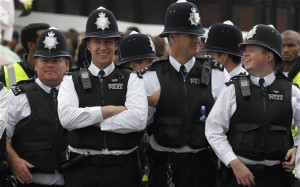 At this point the burger can arrived and was allowed through the barricade so the officers who were keeping back the local muggers, shoplifters, gunmen and children absconding from their schools, could partake in food. Much to their delight.

No further details were forthcoming until 1430hrs, when it reported by the Chief Constable in a statement:

“I am glad to inform you that the hostage situation at the Sebastian Zulqurnain Junior School in Nottingham has been settled without any injuries this time.

He stopped to comb his hair, snuff out his roll-up and pose for some photographs to be taken by the press then continued:

“Both of the Police Officers abducted by the pupils were shook up, but released relatively unharmed after I agreed that no charges would be brought against the children. The graffiti on the headmistress’s door would not be cleaned off for 5 months, and the use of Ganja would be permitted in the playground for fifteen minutes a day during school time.”

He added as the Pizza and Burger vans pulled away:

“Another victory for common sense policing!”