Part of the Nottingham Lads True Tales of Woe

My heroes:
Peter Grummitt in goal.

All mismanaged so ably by Johnny Carey

1969, and my mates begged me to stop going to Forest matches!

Bill said I was the ‘kiss of death to them’.

Frank said I was a ‘curse on them’.

Alf said I ‘cast an evil eye on them’.

They each suggested I go forth and multiply and questioned my parentage.

They then pointed out that I’d only been to 6 matches that season, that resulted in:

… and could I please stop attending the City Ground? (Or words to that effect)

I laughed this off as rubbish.

The next season, after I attended my first match (And only match of the season) versus Arsenal, and they lost 4-1… I did stop attending the City Ground after that!

I slept better last night, only waking up about five times I think.

Up and on the laptop drinking a cuppa by 0445hrs.

Not feeling on top form though, took some bags out to the bins to find someone had dumped their rubbish bags nearby.

Bit of an early dizzy spell.

Going to spend the day indoors methinks. Working away on the laptop and feeling guilty.

I was feeling nervous when I awoke at 0120hrs, apprehensive.

Had a rinse and cleared up the blood and came down had a sip of spring mineral water and got medications ready for the 0500hrs doses.

Can’t believe I do not fancy a cuppa.

Aware that today I have visitors coming to assist me, and I am very nervous at what they will find here at the hovel.

Updated this diary to here.

Lynton and his son John called, they were stuck on the motorway and would be a little later than arranged – nice that.

They arrived and I felt I’d known him for years.

We gossiped while they helped me get the laptop going so much better. We left it doing a clean-up programme and they drove me out for a bite to eat in Sherwood.

They kindly went into the Computer shop with me to analyse and understand what the chap was offering. 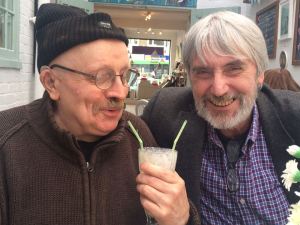 See me smiling? Thanks Lynton!

Then we went into a cafe where they treated me to a bacon sarnie, and let me knick one of John’s potatoe waffles.

We returned still nattering to the flea-pit.

They helped again by taking away some of the rubbish I have accrued.

They will never know how much they have helped me today – bless em both with all my heart.

A cuppa tea and they were off with fond goodbyes.

Now John has got my wi-fi sorted I can use the laptop upstairs again, and it is so much quicker.

Had a microwaved potato and sausages for me nosh.

Tired, but feeling happier than for a while I went off up to kip… angina playing up. Tsk!