A bunch of lads from the RAOB lodge, had arranged a charity football match in aid of a couple of Children’s Charities, all proper like.

We hired a patch of the Forest Recreation ground to use as a pitch, hired the changing rooms, printed the advertisements, got lots of interest and prospective spectators to get some money out of, and the morning of the match, it was well sunny.

Oh, did I not mention… it was a ‘Fancy Dress Football Match!

I was due to be a linesman on the day. We soon realised that not enough players had turned up on the day, and I was elected to play… in my bath towel wrapped like a nappy, with a giant safety pin, heavens knows where my mate had got that from. I think he might have made it out of wire coat hangers?

Many supporters were awaiting our turning out from the dressing room, the local paper even had a photographer there… and the rain came down!

We made a quick decision to play only twenty minutes each way.

During the match, I didn’t actually get to touch the football at all, (none of the lads deemed it advisable to pass me the ball, I even tackled my own team-mates in an effort to get the ball, but being as my footballing skills were notoriously pathetic, I failed) as the rain made the towel heavier and heavier, I was soon glad I had my underpants on underneath, as the inevitable happened and the towel sagged and drooped, then fell to the ground – unfortunately taking my undies down with it!

Thank heavens the photographer has gone earlier to avoid the rain.

The few wet supporters who had stayed in the rain got a laugh at least.

Still we made about £80 on the day for the NSPCC.

Awoke around 0500hrs, feeling no warmth or wetness from the lower regions, just tenderness?

Only a few dribbles of blood when I washed and Cortisone creamed him.

Made a cuppa, and sorted out the laundry things ready for my mammoth washing trip.

Read a bit of me book with a cuppa and took me medications.

Set off for the launderette got as far as the new street furniture (See photo) and realised I had not got me hearing aids in as soon I nearly walked in front of a car, so returned to get them – but where were they?

I searched all over but could not find them getting annoyed with myself now.

I decided to have another look for them after I’d finished the washing.

Commuters on their way to the City this morning

Set off again to the launderette.

I got the two machines going and had a walk back to the flea-pit and had another search for the hearing aids. After much frustration I found them on top of the radio? Immediately I spotted them I remembered putting them there… oh dear, the mind doing its own thing again?

I returned to the launderette. 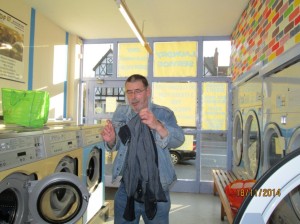 Big John arrived at the launderette – he’s got a stinking cold and warned everyone to keep their distance. Poor old John.

Took a photo of him as he did his washing, I’ll send it to him later to cheer him up.

Poddled back to the prison, and got things ready to go out shopping to Bulwell for some bread. I’m still on cold food until I can get some help fetching a new microwave. 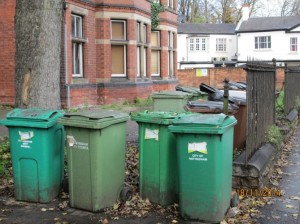 I put some stale bread and bird-seed in me bag and had a bit of a walk to the tram stop on the Forest and caught the Tram into Bulwell.

I spotted two squirrels on the top of some dirty bins and scrambled to get me camera to take a shot of them – but they were off too quickly for me.

When I got off and walked over the

bridge, there was a large count of 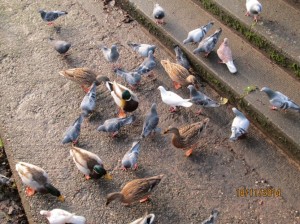 mallards I (my favourite ducks) in the river Lean underneath.

So I fed them the bread, and the pigeons arrived on the bank who I also fed. As I gave the bird seed to the pigeons some mallards climbed out and actually ate the seed?

I walked to Iceland and got some bread.

Then to Fulton’s foods and got some lollies.

Then to Herons and got more lollies.

Hobbled to the bus and I caught one back to the hoppit.

As I got back and put me bits away – fatigue overcame me and all I could do was get me head down, and the sleep came easily… perhaps too easily?

I slept through until 2300hrs – missing my evening medications. Some, like the Warfarin must not be taken if over 2 hours late. So I just took the statins, trental and painkillers late.

Not having washed earlier or tended to the ‘Inch’ I did so. 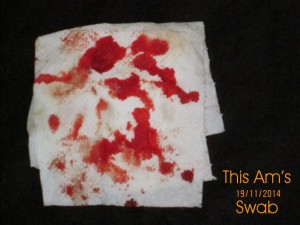 Bleeding not too bad with little ‘Inch’.

Laptop on and updated this tosh.