0400hrs: Great Balls of Fire! Five-hours sleep, no wee-weeing, no nocturnal nibbling, no somnambulating as far I could recall and no uhtcearin. A phenomenal unbroken five-hour kip!

I pandiculated gently, and Duodenal Donald let me know he was in a bad mood. Then, As soon as I moved my short-overweight flobby-body, to commence removing it from the ‘plastered with plaster by the plasterer’ £300 second-hand recliner; the innards began to rumble, with a difference. No indications for the use of the Porcelain Throne came with the grumbling insides? The movement made it far worse, and I would not be surprised if the intestines didn’t explode later. Tsk!

So, from waking in almost high-spirits, within seconds, these pleasant sensations dissipated into the ether. Tsk!

The flat was not very warm, apart from the kitchen, which was showing 69°c on the thermometer? I checked to see if I’d left the oven on, but I hadn’t.

I tended to the Health Checks next. 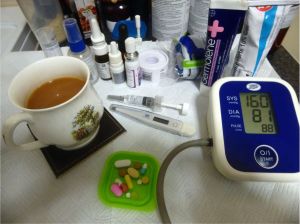 All were looking good I thought. The pulse had gone up a bit at last. The weight had also gone up a little. Humph!

I’ll have a good hobble later on. I might go to Arnold on foot, to get some nosh from Asda, or not maybe, perhaps, possibly. With my luck, someone will call from Nottingham City Homes or the Willmott-Dixon Demolition… I mean builders. (Or do I? Hehe!)

Made a brew of tea and took the morning medications. No indications of any imminent arrival of any need for the Porcelain Throne, and the bubbling within remains churning away. But it feels so different to the usual warning-sign gurgle. No messages about this from the EQ, but I sensed a new problem or ailment might soon visit me. Hello, I just typed this, and one phenomenal escapage of wind blasted out from the rear-end – it almost lifted me up off of the chair. Hehe!

I got the computer on and updated the Monday post, then posted it off to WordPress. Checked the emails.

A go on the WordPress reader next.

Getting ready for the ablutionisationing, and had a change of heart about walking to Arnold for the shopping.

The rain was heavy and looked set-in!

Going through to the wet room, I espied another leaflet from Willmot-Dixon demolition team, no, Building Team.

Oh, dearie me! More hassles! Still, no blame attached to anyone here.

These new marks on the lower right arm had appeared overnight it seems.

Finished the cleaning up and went to update this post to here.

Things in the bag, including the umbrella, and set off to the Obergruppenfurheress Wardens HQ and Social Shed, to keep dry, while I awaited the arrival of the L9 bus.

I got to the door, and had to rush back to the Porcelain Throne! A decent evacuation, not too messy. Bits of blood from both ends, mind, but hardly enough to be worth mentioning. However, lots of wind of hurricane proportions accompanied the torpedo-like escapage.

Washed-up and set out of the door and opened the hall entrance door to be met by a Willmot-Dixon worker’s implements. All tidily stored along with some windows the lad was about to install somewhere. 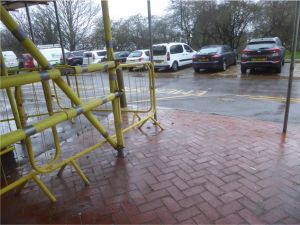 Down in the elevator and out into the dim drizzle and puddles on Chestnut Walk. It was not cold with the weather at all.

Half-way along, a break in the rain allowed me to take this rather interesting shot of the new building works in between the two old blocks.

They will have earned their money by the time this gets finished.

Heck of a job they have on here. Now that more Pipistrelle bats have been discovered; their schedule will have gone all to pot. But, no one believed me when I said I saw a bat months ago, did they? They just scoffed at me! Oh, yes, I remember! Thought I was being awkward or teasing them they did! Hehe!

I Hobbled down to the Social Shed, Obergruppenfurheress Warden Deana and Oberstleutnantess Warden Julie were busy in their office. Poor things always are.

I stood near Welsh William and Roy to collect my daily put-downs. Haha, only joking… am I? Some other residents joined us, including Cyndy and we had a chinwag and laugh.

Out to the bus stop and I got on the Bestwood bus with many others, who all got off in Sherwood. Cyndy was off to Mansfield for a days shopping. Naturally, I stayed on the bus. I got out the crossword book, but the grey-cells were reluctant to function. Tsk!

I only got as far as the Ring Road traffic Island, when I put the book away and gazed out of the bus windows until I arrived in Arnold. 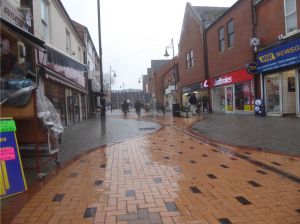 The shopping parade was drenched in rainwater.

I went into the Chambers butchers to have a look what their home-made roast belly-pork slices looked like – if they had any of course. They did, small slices and very lean for a change. So I purchased 6 slices for £3.29; not cheap, but they are a luxury and treated myself.

I walked to the Boyes Store, to see if they had some haemorrhoid cream on sale. They hadn’t any, but I still came out £9.99 lighter and with a full carrier bag. Foot spray, shoe spray, three tablets of Yardley lemon scented soap at £1.29 each. Again costly, but this is my most favourite of all soaps. Another self-treat, Huh, spoiling myself here and Vitamin B tablets. Also, I spotted some Plants-in a Tin. You just add water, and they grow. An excellent original idea I thought for Jenny and raffle prizes if she wanted to.

Then to the Saver shop next door to Boyes shop, to look for haemorrhoid cream in there. They had some of the Care branded I had ordered from Morrisons. But, the same size at only 99p a tube. Much cheaper than the Morrison one. I also got a pack of tuck-in PPs and a roll of black refuse bags. I had to another bag now to carry the stuff.

Off then to the Asda-Walmart store. Where I spent an even more significant fortune! Gullible Sillytonian me! Lemon desserts, grated cheese, a red onion, a small turnip, a large tomato, TV magazine, three ready-made meals, potato scones and cakes and some cheese curl snacks.

When I was paying the lady at the checkout the £17.48 I owed her, I had a funny-wobbly turn. Thank heavens, it didn’t last long, but I cannot remember paying the lady or leaving the shop? Or getting to the bus stop for that matter. I was in the shelter, and the rain was pelting down when I came around as if to put it.

But I felt fine, just a bit of lost memory?

The bus arrived after ten minutes or so.

As we approached the ring-road next to the Nottingham City Hospital car park, I took a picture, of what should have been a pigeon flying alongside the front of the bus. But it had gone by the time I pressed the button on the camera. Tsk!

Then blow me the flipping pigeon returned to

I fumbled to get the camera out again, determined to photographicalise it this time. But no, a bus overtook us and hid the bird from view! Ah-well!

Up and on to Mansfield Road and the Sherwood stop. Where several tenants boarded the bus.

Got to the flats and I legged it along with a Roy and another bloke and a lady tenant back to the apartments and up the lift. 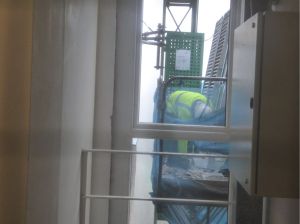 As I got out of the lift, I noticed the Willmott-Dixon lads had all but finished installing the windows in the lift foyer area. They had replaced the old full open grills in the outer wall, with the windows.

Far less blowy and cold there now. I assumed this job had been done now, while the team are prevented from doing the cladding. 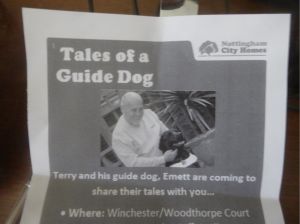 Another flyer was found stuck in the letterbox.

Had a wee-wee and did the Health Checks.

I got myself in the flat and sorted out the day’s purchases. Trying not to think of how much they had cost me, Hehehe!

Not that I was bothered really, me being a millionaire and liar. Haha! 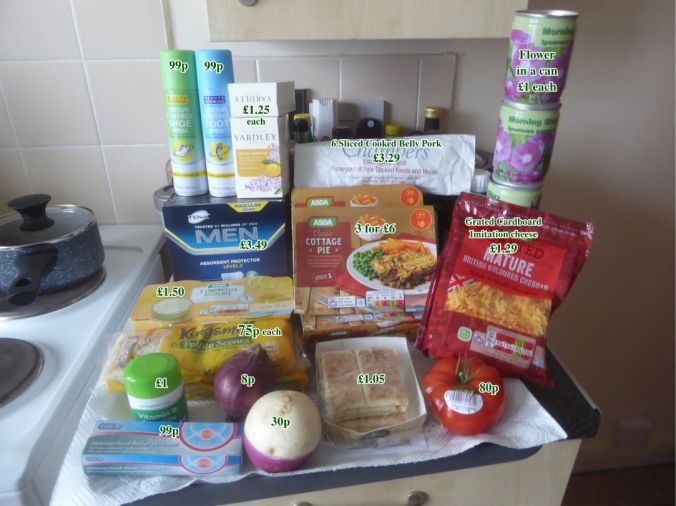 As the rain stopped, an unexpected mist began to descend.

I got on with updating this diary. Four hours later, I remembered about the flower-in-a-can and wanted to take it to Jenny. But could I remember her flat number? No! So I got the cans in a bag and went off to the Obersturmführeress Wardens shed, to see if Jenny was there or get her apartment number. Oberfefrieterss Warden Julie was in the office, up to her neck in work. She gave me the door-number and asked what was in the bag. I showed the flower-in-a-tin. I had a nice chat with Resident Hauptmanness Contact Leader, Cath. Hehehe! She had been Grandchildren sitting for a week. Told me to call in the hut in the morning, and she would contact the Doctors for me about the missing haemorrhoid cream in the prescriptions, for me. Bless her.

I went to see Jenny. She liked the flowers.

When I got back to flat and went to make another brew, I noticed that the kitchen door handle had all scuff and scratch mark on it?

I don’t recall them being there before.

I got the oven warming up and then continued updating this post.

Did the last of the Health Checks. Hello, noise from BBJ up above.

I had a perusal of the WordPress Reader.

Got the nosh prepared and set about eating it.

The roast sliced belly pork was good as I have ever tasted! Gorgeous!

I had to grant this nosh a meritoriously deserved 9.35/10.

Went to do the washing up. 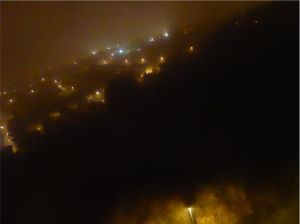 The mist seemed settled in for the night.

Down in the £300 second-hand recliner and got the TV on to watch a Hustle episode.

Fell asleep almost immediately and had a dream that was so different to any of the others that I could remember.

I was at St Peter’s Gate, and classifying the destinations for each person as they queued up in a neverending line. I was dressed as a sort of short, plump bald Elf. I had this dream not as if I was in the dream, but instead, as if I was viewing it on a giant screen? I sense there were some famous and notorious folks in the queue, but I’m damned if I remember who they were. Most disappointing.