0245hrs: I woke in the chiropterophilous Woodthorpe Court flats, and fought to get back to sleep, but lost the battle as soon as the mind kicked-into-gear and started to wander off on its own accord, again! I disentangled my lumberous body from the £300 second-hand recliner and off to the kitchen. Where I did the Health Checks.

Turned on the computer, and a demand to utilise the Porcelain Throne arrived.

En route to the wet room, I sensed the blood running freely from Little Inchies lesion. Then felt the Protection Pad dropping down my leg under the jammies! I was not wearing the full Protection Pants, just the new pad that goes under the undies. I don’t want to explain any more on here. Suffice to say, it took me ages to get cleaned up and remediate the situation. More togs for the laundry bag. I think I’ll not use these pads again. Ah well, at least the evacuation went well!

Changed into clean jammies, when what I should have done was to have shifted back into the day clothes. Feeling a little uncomfortable and anxious now.

Back to the kitchen to make a brew. Took some photographs of the foggy morning outside.

Then I decided to have a full stand-up wash and shave etc. (Too early to have a shower, cause of the noise it makes). Quite enjoyed it. Used the Dettol soap, refreshing scent to it. Donned the day clothing.

0500hrs: Back to updating yesterday’s Diary. Got it sent-off. Then began this one off, up to here.

I made a start on a funny post. A rewritten to the tune of “It’s a long way to Tipperary”, titled Poetical Advice on the Ageing Process.

Didn’t seem so much this week, but it cost the same as last weeks.

I ate one of the mini-pork and pickle pies for brekkers. Dry and a bit stale tasting, and only had two days life on it. Shame!

No sourdough bread for the Warden Obergruppenfurheresses! Tsk! And, the two chocolate bars with hazelnuts I thought I’d ordered, turned-out-to-be 2×6 Pots of chocolate desserts. Eurgh! I can give them away at the social hour. One for the Wardens and one for Jenny to show thanks for all the work she does for us all. Kept them in the fridge until I was ready to leave later.

Did some updating work on this diary, then got myself ready for setting off to the social hour. Filled the nibble box, put the raffle prizes in the bag with a full box set of Hyacinth Bucket episodes in the bag, to loan to Cathy.

Some Windows Updates arrived. So I chose the update and close-down option.

Then the phone chirped into life. It was the surgery with the blood test results and new weeks dosages. I wrote them down on the pad. The result was down to 2.2. (No wonder I had all the bleeding earlier this morning!) Then I asked for the next appointment day and time. She got me in for next Wednesday 18th at 0945hrs.

This phone call made me a little late leaving, but never mind, it can’t be helped.

I was soon down and out of the foyer maze and into the cold wind and drizzle.

The wind was far nipper than I thought it would be this morning. Others I saw and spoke to en route, said the same to me.

I took this photograph of the flats with the new build coming on well. I’m still not convinced whether they have built an extra floor on it. Hehe!

I got to the social shed, and Untergefrieter Warden Julie was in her office. Seeing they now had a fridge in there, I gave her the chocolate dessert tubs and explained why there was no Sourdough bread for them this week.

Into the main room and put the raffle prizes on the trolley. Handed Jenny her tubs of dessert. I sat down with John and Bill -William on Sundays, but not Cathy was here.

I went into the bag to get the nibble-box out to distribute, and another clanker identified. I’m left the nibble-box in the flat when the call came in from the surgery! What a Palooka!

So, out and back up to the apartment to fetch the box. Got it in the bag, and left the ‘Keeping Up Appearances’ box-set in the flat, being as Cathy was not there at the meeting, to lessen the chances of damaging them. 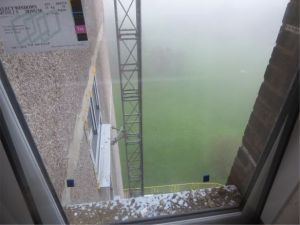 As I left to go back to the Social, I took a photograph through the new windows at the back of the flats that had replaced the open vents.

Don’t get a chance of taking photos of the Woodthorpe Grange Park very often from this angle.

Back to the meeting, and handed out the nibbles and had a few little gossips and laughs, with Jenny, Cyndy, Margaret, May, Gladys and Bill, Frank and Eric.

Well, blow me down with a feather duster! Cathy arrived! Humph! Just when I’d left her DVDs in the flat!

I got some raffle tickets and handed them out to Cyndy and Margaret this week.

I enjoyed a good chinwag with Cathy. Then it was time to return to the dwelling in the sky.

I took another photographicalisation of the new build on the way back to Woodthorpe Court.

The sad block of uncladded, part-updated sad-coldness that awaited me, and all other chilly residents.

I set about cleaning, skinning and cutting up the parsnip, onions and sugar-peas and getting them in the Crock-pot.

I added some beef gravy and balsamic vinegar to the mix. But not sure if I’d done right to put the seasoning in first or should I have waited until it was cooked?

Any advice would be most welcome for next time; I thank you in advance.

Had a wee-wee and did the Health Checks and medication taking. 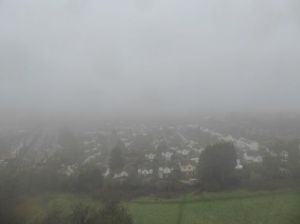 The mist was still lingering, but the drizzle had stopped.

I got the computer back on, and the screen was white with the working icon turning away. Oh, dear! The Windows Update? Had something gone wrong? I was thrown into Instant-Panic-Mode! The stomach churned, and I do believe I used a few naughty words silently to myself!

I waited a while but nothing started, no messages came up. No opportunity to use the proper Close-Down option, because it wasn’t there! I gulped and turned everything off at the power source. Waited a minute or so, then rebooted. All looks to be working. Grumph!

Did about two hours working on this post. Stirred the vegetables and put the oven on ready to cook the Cumberland pie later. I’m not putting any extra cheese on the meal this time, due to my using gravy with the vegetables in the slow-cooker? Not feeling too confident that this will come out right. Fingers crossed!

A lot of banging noises coming from Big Bad Herbert’s flat above?

Went on Facebook to see if it was playing up or not.

Started in grand-style, then dipped a bit.

Got the nosh prepared. Possibly the oddest of meals I’ve accidentally created, ever.

The carrot and leek pie with parsnip potatoes that I thought was a Cumberland beef pie. This was because I’d took the outer box off earlier to read the instructions and threw it away after putting the contents back in the fridge. Had not cooked through, and I selected the hottest bits from it to eat, the potatoes and a bit of the veg. Took the tomatoes off of the tip and ate them. Added the crock-pot cooked onions and parsnips in beef gravy, strained them and added them to the plate. Sliced apple and some more fresh tomatoes added along with some chicken BBQ sticks. A rather pathetic looking meal. I put some crisps in a plastic pot as well. Absolutely astounding, it tasted smashing! 9.27/10 scored. 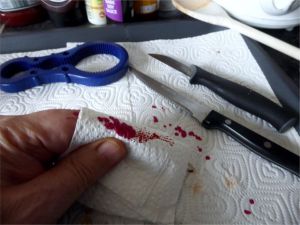 Cleaned the pots up. Ahem!

Did the last Health Checks etc. during which I found the ‘lost’ tube of the ‘Care’ haemorrhoid cream. I didn’t use it, because I have two tubes on the go now.

I now have the not very useful Anusol, the Germoloid (the best one by far for relief), and

the untried as yet, Care label one to choose from using.

Got down to settle and watch the TV. Five episodes of Law & Order were showing, on three channels at the same time, some the same one as the others. It took me a while to sort out which ones I wanted to watch – not that this mattered in the slightest, cause I drifted off on the first one I started watching when the first set of adverts came on!