0330hrs: Fiddlesticks! I woke up feeling a bit lively (even if only in mind as opposed to the body), decided I’d get the laundry done first thing.  The moment I stirred my wobbly-barrel-like body to remove it from the £300 second-hand recliner – the ailments convinced me not to do down to do the laundry. Hippy Hilda and Duodenal Donald combined with Dizzy Dennis to make the start of the day a somewhat uncomfortable one.

I had planned to get a bit of cleaning up done before Sister Jane arrives tomorrow to tell me off. But, the slightest stretching or bending was painful, kicking Donald into misery-making action. The situation might change later on though.

I hobbled (The tootsies have been sore for a while now) into the kitchen to do the Health Checks and take the medications.

Made a strong-brew of Yorkshire tea, that was very welcome indeed and went down comfortingly. (Is that the right word?)

The pulse is still low, I think.

I had to get to the Porcelain Throne in haste, as things burst into action in that department with such rapidity, almost explosively. I only just got there in time. This evacuation was the one with a significant difference. Quick, not so messy and no bleeding from Haemorrhoid Harold whatsoever! Little Inchies Fungal Lesion had been bleeding, as usual. Cleaned-up and back to the kitchen.

Another mug of tea had to be made to replace the one that had gone cold. Foolishly as it turned out, I decided to use the fancy bigger cup.

It slipped from my shaking Shaun grasp, hit the floor and the handle broke off. Getting down to retrieve it was disturbingly painful and started Anne Gyna and Duodenal Duncan off. I managed to cut the left thumb on the broken pottery where the gripper used to be. Well, pickle my walnuts! Afterwards, I noticed the vein along the back of the digit showed up on the skin, I wonder why? I carefully wrapped the broken pieces in some kitchen towels and put them in the black waste bag… carefully! Hehe! On the bright side, I was glad I bought two of these mugs and made a brew in the broken receptacle’s brother Cautiously! 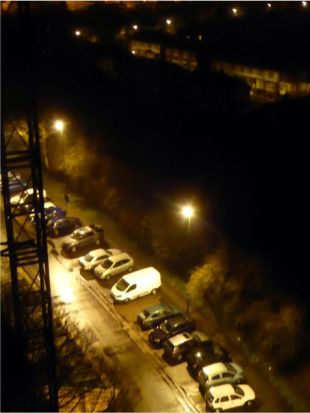 I spotted the rain on the kitchen window. I know I said I would not risk taking any more shots from outside of this window, because of the dangers and limited view offered now they have made the openings so much higher and farther to reach to. (What a mouthful there? Haha!)

I was in a right state to try stretching, so I just stuck the camera out, while trying to protect it from the rain, and blindly snapped a photo.

Not a bad effort, considering. It came out a bit of a ‘Moody’ one. Perhaps. Maybe. Possibly. Mayhap? Or not.

All pure pot-luck of course.

I started to create this blog, and got as far as here, by 0610hrs, then went on to update the Friday diary.

0730hrs: Began getting Friday’s diary concluded and posted off.

After four-hours of creating page top graphics, getting only three done, and listening to that Git upstairs, Big Bad John banging about, I made another brew of tea.

I thought I might have a pie, potatoes and garden peas for a change later. Just a thought, like.

I spent many more hours on doing the page top humour graphics. Accompanied all the day by Big Bad John’s rattling and banging on and off.

Went to prepare the meal, get it cooking.

I took a photograph of the meal, but another one goes AWOL into the ether, never to be seen again? Tsk!

I flaked-out watching the Gogglebox.