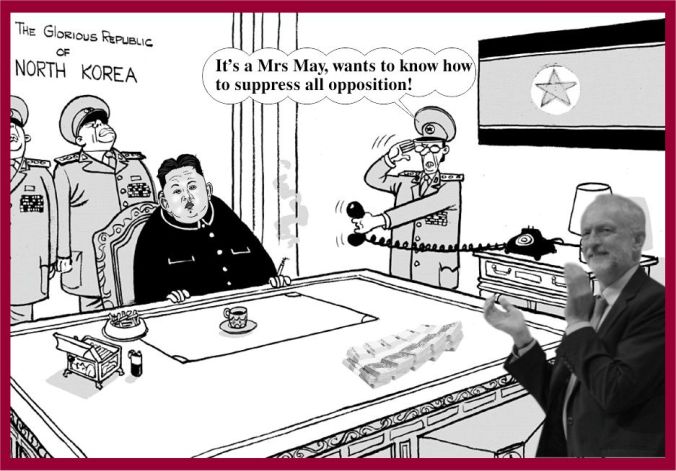 0410hrs: Woke with memories of a dream or dreams I’d been having. People were coming in through the windows and doors, leaving their bags of rubbish in the kitchen?

I stirred in the £300 second-hand recliner and the itching, prickly skin on the face, back, neck, legs, and arms were very irritating. 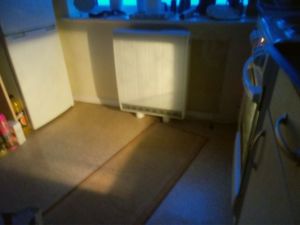 What a Schlemiel! Plonka and Idiot With Distinction, Merit, class One, Grade A Alter cocker, Amoretz, Fertummelt, Pillock, Dimwit, and Coffin-chasing fool I am: As I went into the kitchen, the light and heat from the oven that had been left on for eight hours on 230°c greeted me! Humph! At least it was warm and snug in the kitchen! Klutz!

Went to make a brew and do the Health Checks, but got diverted by the need for utilisationing of the Porcelain Throne. A much better session this time, still a little messy, but far less so. Cleaned up.

I got the Health Checks done. 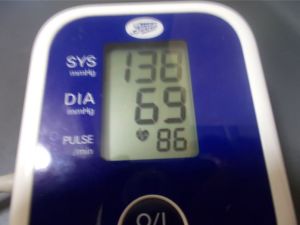 At last the Sys, Dia and Pulse results had come down a smidge.

Made the tea and took the medications.

Putting away the milk (Without dropping or spilling anything, Hehe), I caught a reflection of my face in the little (I daren’t use a large one) mirror on the window ledge. 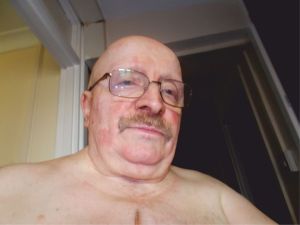 Talk about having spots, blemishes, discolouring, pot-marks, and blotches!

It almost made me jump when I saw my grotesque, almost hideous facial features. Tsk!

And the operation scar on the chest had changed to a deeper colour, too? As a rule, I hardly notice it nowadays, but today I did. 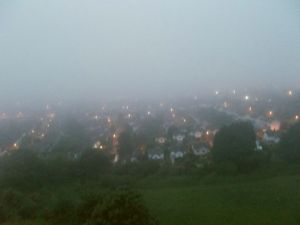 I wonder if the film people need ready-made monsters? Hehehe!

A steady mist out there today.

Computer turned on, and I got the diary for Monday finished and posted.

I did the WP comments and went to the WP Reader site.

What a pickle – WordPress problems, Facebook, computer and even difficulties with Grammarly and CorelDraw! Spent ages trying to get to work on WordPress. Gave up and turned off. Tried again, no success. Went through options etc., off and on and it seems to be working still. (WordPress

Got the camera to take back to the shop, nibbles for the nurses and mobile in the bag.

Another go at sorting the computer – no luck.

Got the ablutions done. No cuts while shaving, No bleeding from Harolds Haemorrhoids. Little Inchies lesion bled, but no worse than yesterday. I got the pain gel, and skin cream applied to my rashes, spots and itchy areas.

Made a small mug of tea and updated this page.

Wrote a shopping list and made sure the phone, camera, and crossword book were in the shopping bag.

Set off out as far as the lift lobby, then returned to the dwelling rooms, ’cause I had a sneaky feeling I’d left the tap running, but all was okay. So off out again. I dropped the Kettle Balsamic crisps off on the 9th floor. 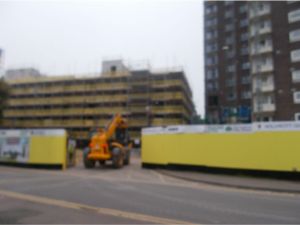 Took this amazingly poor quality photo of the centre complex on the way down Chestnut Grove.

Arrived at the Nottingham City Homes, Unterscharfühereress Wardens Temporary HQ, Willmott-Dixon workers breakfast and tea-break room, Tenants Socialisation Shed, Telling Inchcock off Zone and Things to be stolen by residents container Shed, which had been opened, as usual when the Warden’s are off on holiday, by Jenny. 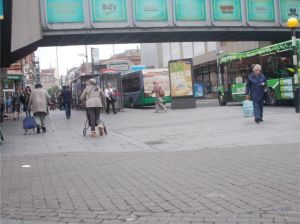 Five tenants were in there. We were joined by many others, and we chinwagged away until it was time to go out for the bus.  I asked Margaret for her email address so, I can pass on the photo I took of her and Cyndy, last week.

Caught the L9 bus and dropped off on Upper Parliament Street in town. The coach on the right of the frame is the L9 that’d dropped me off. 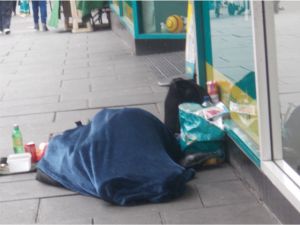 Outside the Poundland store, was a Rough Sleeper fast asleep on the pavement.

It is sad, but you read of so many con-men doing this. A Nottingham youth was prosecuted for something or other, last month. He was travelling to London each day to street beg with a roll-up sleeping bag. Then getting the train back to Nottingham. He told the court he was only ‘making’ £300 a day, and he did not do it on weekends.  But I cannot recall what the charge was. But he got fined £150 and given some Social Hours to do.

I made my way straight to the Jessops Camera Store and waited around for a day or two, (Only joking, but it felt like a long time, Hehe!) until an assistant was free to serve me. 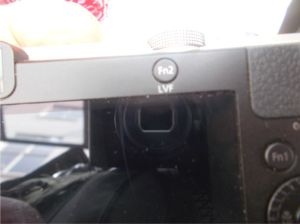 She was very patient with me. The particular ‘Poor, pathetic, dysfunctional, senile old thing’ mode and look, she adopted; Was the one of, if not the, best quality ones I’ve ever seen enacted so perfectly, in any store anywhere! Brilliant the way she did not make me feel embarrassed! Although of course, I was!

She pointed out that the Fn2-LVF button had been caught or pressed. I still don’t know what this button is for, but am now aware that if the screen goes off again, I am to push it repeatedly until the view comes back on. Thank you, young lady!

I bought another SD card. Then asked her where the Macro option is on the Lumix. She told me there isn’t one. But if I go to the SCN option on the wheel, and select the ‘Food’ picture option, this is as near to Macro as is available. 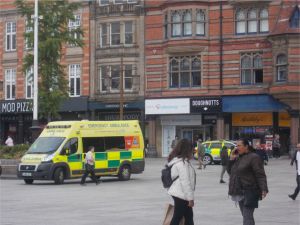 I thanked the young woman and departed.

I hobbled into the Slab Square. A paramedic car and ambulance were at the bottom of Queen Street. No policemen around, of course.

Come think of it, I didn’t see a police officer anywhere all the time I spent in the City Centre today. A rare specimen, a PC in Nottingham.

I limped across the Square and to the Poundland shop that sometimes has Pork Farm Pork Pies on sale.

They didn’t have any, though. And, the place was reminiscent of the old Bridgeway Hall Methodist Church jumble sales back in the 60’s. However, I did spend a bit on things not needed or wanted. But I did get some stuff to fill the Social Hour Nibble box up with. Some long-life individual pots of milk, diahorrea capsules and rubble sacks. 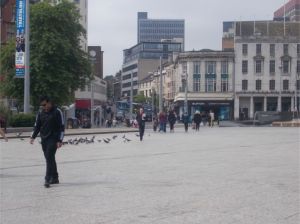 Leaving the shop, I realised I had to make my way to the bus stop, so as not to miss the lift home.

The Nottinghamian’s did not look a happy bunch today. There were two Traffic Regulation officers, wandering about. Which shook me at first, because I thought they were policemen. Hehe! 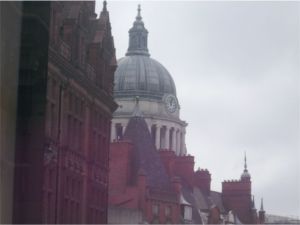 I got to the bus stop with minutes to spare.

The mind started off on one of it’s meandering, musing, self-guided tours of my problems. At the moment, I cannot recall where it took me, but its bound to come back into the grey-cells later. I think, perhaps maybe?

Time went by, and the bus was well late, ten minutes or so. 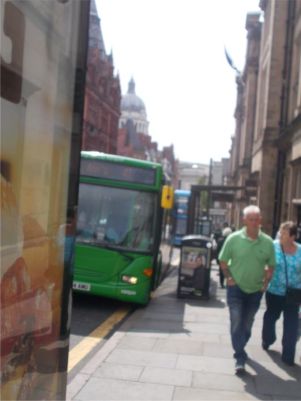 Then it was fifteen minutes, as the bus came into view.

I was the only passenger to get on it.

The driver told me the traffic, and parked cars delayed his arrival.

He had to get someone to move a car on King Street so he could get through.

Then at the bottom of the same road, a car had parked on the corner, and he had to get help to guide him through between the other parked bused and the naughtily parked offending vehicle. 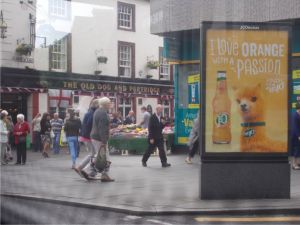 The bus moved off, and at the Parliament Street stop, it almost filled up.

I took the opportunity to take an interesting photographicalisation of The Old Dog & Partridge Pub across the road.

The driver soon got us back to the flats, and the agitatedly waiting for the bus, a gang of tenants. 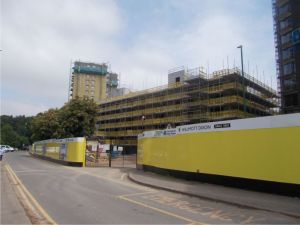 The Willmott-Dixon lads are getting on with the new extra care building in between the other two blocks of flats with the new windows that block out the view and light. Just thought I’d mention it. Haha!

The plates-of-meat were giving some stick as I limped back to Woodthorpe Court.

Up to the flat, had a wee-wee and got the purchases stored away.

I decided today would be cheesy mashed potatoes, garden peas, tomatoes and some of the Nordic Style cooked meat, for the nosh. 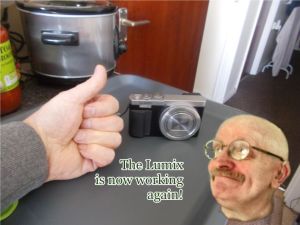 I was so pleased that the Lumix camera was working again. Not that it had stopped working of course. Just that I didn’t know how to get it working still. But I do now after the young girl has shown me. Made a mess of saying that didn’t !?

On the computer and started to update this blog.

Did this graphic in celebration! Haha!

I did the Health Checks and medications taken. 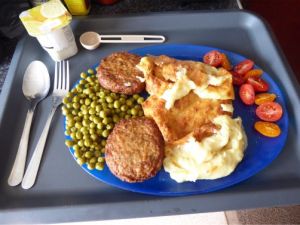 Got the oven on and put the potatoes in to cook off.

Got down in the chair and enjoyed this so much. Gave it a mental rating of 9.455/10 for taste. Hehehe! 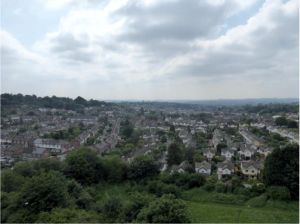 Went to get a drink of orange juice and took this photographicalisation of outside from the kitchen window.

I used the working again Lumix.

Got down in the £300 second-hand recliner and the aches and itching started straight away?

As I was Phorpain gelling the knees, I noticed 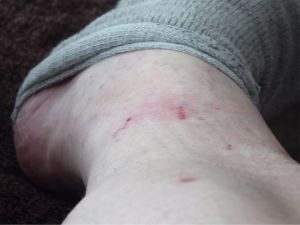 some more mystery marks, scratches lumps and discolourations had come up on the legs and ankles?

I think I might be rotting away here? Haha!

I watched a Rumpole of the Bailey episode on the DVD, and as soon as it had finished, I nodded off and had a dream about my being a cat, and living with my sizeable feline family, I was the black kitten, all the others were grey and white?

Managed to drift off again, and the doorbell chimes rang out. I struggled to get my body removed from the recliner. I was sure that whoever it was would be long gone by the time I got to answer the door. But the lady was still there, she was looking for a lady tenant, but had got the wrong flat. Tsk! Never mind.

Head down again, but not for long, I had to get up to go for a wee-wee!