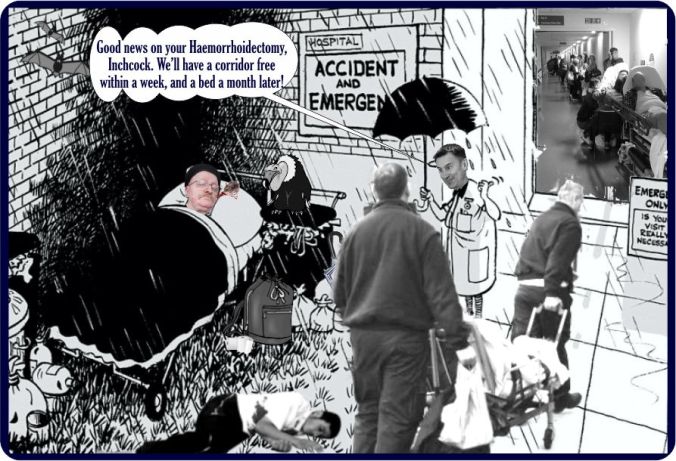 0215hrs: Woke with a sudden jump, thinking I was in an Olde World village marketplace, at the end of a massive queue of given-up-all hope bedraggled looking peasants. All were waiting to be beheaded. Around me were people in Charles Dickens type clothing? I presume this would be part of a dream I’d been having? But, this is all I can recall.

As the brain and body slowly began to merge into a mock semi-operational unit, I realised that somnambulant nibbling and possibly some noctambulistic activity had been performed overnight.

All the signs and indications were here around me. The half-drank mug of orange juice, the two part-melted chocolate peanuts precariously attached to my chest hairs, the TV remote control, camera, pen and the notepad with indecipherable scrawling covering a page and a half! I’d have more chance of working-out Egyptian hieroglyphics without my glasses on than to read this cacography.

Climbing out of the rubbish-strewn recliner to go for a wee-wee, I stood on a bag of cheese-curls that I was unaware of. ‘Bang’ the bag popped open and sprayed crumbs all over the carpet! Being so early in the morning (0300hrs) and not wanting to be like that Noisy Herbert who lives above me and disturb others, I did not use the hoover to clean the mess up. The old brush and dustpan were put into action.

Off to the kitchen to do the Health Checks. 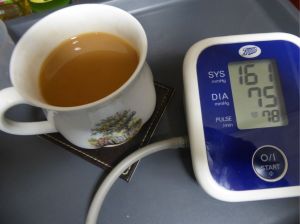 The readings were most satisfactory, and the mug of Yorkshire tea went cold; As I had to visit the Porcelain Throne as soon as the Health Checking was completed.

The evacuation turned out far less bothersome than those of late. Now, I was beginning to worry. The Whoopsidangleplops are acceptable and expected nowadays for me, but these bits of good luck are concerning me. The sphygmomanometer working at only the second attempt, the Porcelain Throne evacuation going so well… Mmm! My EQ indicates that I will pay for these good moments, later! Yes, I probably am going pottier than usual.

Computer started, and I got the Sunday post finalised, and sent off to WordPress. Which, incidentally is still swapping my set option for UK English to US English, every time I come out of the programme to use Word, Excel or CorelDraw, or update the page (F5). Tsk!

Updated this blog to here, and then went to make another brew.

I took a photo of the residents parking lot below the window.

I hope that the dark car on the double-yellow lines leaves before the vehicle parked on the grass verge needs to be moved. I actually feel glad I am no longer allowed to drive, I bet there must be some arguments and altercations going on now, with all the months of building work, and many more months to come, causing mayhem with folks trying to get somewhere to park-up.

I went on to the WordPress Reader next.

Got ready for the trip to town to get some pod peas if possible and a bottle of liquid soapflakes from Wilko.

Dropped of the black bags down the waste chute on the way down.

I ambled along Chestnut Walk alongside the hedges behind the car parking slots.

I noticed several of these butterflies on the greenery.

Sorry that I didn’t take the best Lumix camera now, this little Nikon model, would not let me zoom in any further. 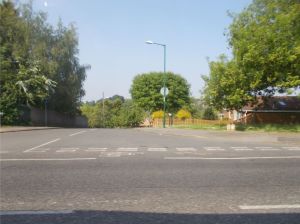 Half-way to town, I took this shot from the bus window, but it was not of the area I intended to shoot.  What a schmuck!

I’d forgotten to take the crossword book with me once again. Tsk!

Got into town, and made my way to the Wilko store and got a bottle of their own label liquid soapflakes (£3).

Paid-up and out over Upper Parliament Street into Victoria Shopping Centre (Mall).

Went to the Market and found some garden peas for sale on a store. Same price as those I got last week at the Mapperley Fruit Shop, £2.98 a pound. (Well, I am addicted to them. Haha!)

Had a walk around the few stalls that were not closed down.

At the snotty ladies delicatessen stall, I got a small sliced wholemeal Continental bread.

Walked down to the ground floor and into the bedraggled, untidy, stuff on sale out of date Tesco.

I got some mushrooms, local muffins, flap-jacks for the nibble-box. Also, a box of two fresh cream doughnuts, on offer at only 84p. I’ll see if any of the other tenants would like one of them later. They did not have any French Cream Horns in stock – Tsk! Hehe!

Made my way to the Slab Square.

The weather was very good.

The Nottingham Food Delivery Pavement Cyclists were out and about risking peoples lives as usual.

I popped into a shop and bought another crossword book to keep in the bag this time.

Took this snapshot of the Council House Little John clock and dome.

Realised I had better get up Queen Street sharpish, to catch the L9 bus. So I did.

The bus was already there at the bus stop shelter. We had a new driver on it this time. I wondered why it wasn’t late arriving. 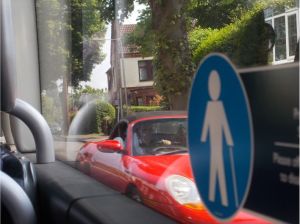 Nora (I hope I haven’t got her name wrong) was sat reading her newspaper, and I sat behind her. The driver stalled the electric powered bus as he moved off. I think he might need to master the brake applying too. Talk about getting knocked about each time he had to stop. Nice chap though, friendly nature.

He got us through the narrow estate roads alright.

After doing and failing with the new crossword book, I noticed my hands had gone multi-shades of reds?

They looked like they had been pebble-dashed on the inside?

A bit of gossiping with Nora and a couple of other tenants en route.

We arrived back at Chestnut Walk with a jerk and shake, courtesy of the driver.

I popped into the Sturmbannführeress Wardens HQ/Office, Social Hut, Training room, Escape from the noise of the building room, and Willmott-Dixon Workers breakfast and break room. I spoke with Warden Julie. However, but, and as it happens, I have been told that.

I bade Julie my farewells and left the hut to go to the flats.

Outside were my Obergruppenfurheress/Catwalk Model Patch Manager and Nora chinwagging. I earwigged for a while, then left them and poddled to Woodthorpe Court.

I got in and had a much-needed wee-wee.

Put the things away, and I decided on Polish Continental bread sandwiches later, for today’s meal. With beetroot, onion, tomatoes and maybe a few chips?

Got on the computer to update this blog. I could hear the worker lads getting closer all the time with the drilling outside. No bother, though, it’s got to be done.

Did the Health Checks tended to.

Got the sandwiches made up and chips, tomatoes added.

Oh, and the naughty but nice cream cake, and some podded peas.

The Willmott-Dixon lads were busy working away outside.

I did what bit of washing up needed and settled to watch the Hustle episodes on the Goggle-Box. And stayed awake through the first one, but the second one was interrupted several times with little nodding-offs.