0300hrs: My expergefaction was short and sweet this morning. No sooner had the brain activated, an ideé fixe lodged itself in my mind, and I just knew I had to get the laundry done, and felt an urgency and essentiality about it!

Had a wee-wee. Got the day clothes and shoes on. Collated and collected the bag of soiled clothing, camera in my pocket and down to the laundry room.

Noticed the state of the room, being slightly messy. I’ll take a hoover down with me later, to try and clean it up a bit.

Up to the flat. Got the Health Checks done and took the medications.

The Sys Dia and Pulse was up a little compared to yesterdays. I thought this was a good sign. Then I realised I’d done the HC’s later than usual and had exerted a little effort, and this is why the readings had raised a tad?

The body and ailments seemed to be doing well this morning. Duodenal Donald is not bothering me at all! Arthur Itis only a few twinges. Reflux Roger, again, just the littlest of enforced deep breaths. Hippy Hilda, well, it felt like I had no hassle whatsoever, but she did start lambasting me physically later in the day. (Can’t expect all the ailments to be tickety-boo all the time.) One must presume asynchronous changes in degree daily. Harry Hernia being kind too. Anne Gyna is only just beginning to offer her stabbing pains here, there and all over the chest and neck area; but this is nothing compared to how she can play me up some days.

Overall, I feel a little lucky with how things are. (Fingers crossed that I won’t regret saying this, Hehe!)

Back down to move the laundry from washer to the dryer. I forgot to take the hoover down with me. Dumkopf!

Got the togs into the dryer and began to clean the other machine.

I came across a rusty screw when I wiped inside the rubber covering at the bottom of the drum. This is the third one of these I have found this year?

I wonder how long it will last before it collapses? Hahaha!

Back up to the flat and got on with updating the Wednesday Diary.

Still no Porcelain Throne visit? Unlike my innards this situation is. Regularly daily, within the first ten minutes of rising out of the £300 second-hand recliner, I find myself on the Throne. But not today.

Updating the diary again, the time seemed to flash by, and the alarm rang to remind me about the laundry. So, back down again – once more forgetting to take the hoover with me. Tsk! 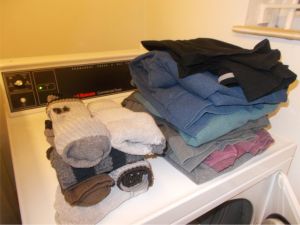 Got the clobber sorted, folded and into the bag.

When I looked at the socks, all turned in themselves, the lighter grey pair reminded me of someone who used a glove puppet that looked similar to the socks. He or she was on TV I think?

I just can’t remember the person, yet I can recall the glove-puppet, although neither name.

To try and clean up the laundry room, I utilised the spiffy, à la mode, semi-automatic, state-of-the-art cleaning equipment with the cobwebs hanging on them, behind the door.

Back up with the clean clothing and got it stored away.

Refilled the accoutrements pots ready for the nest washing session.

The chap arrived around 0625hrs. It seems I had a lot more stuff than usual today, certainly more carrier bags than usual. Yet, I’d spent a little less?

I got the stuff stored away. Unfortunately, I had to throw some frozen stuff away to make room for the new fodder. Schlemiel!

The noises from the lads preparing the out wall ready to have the insulation fitted, before the cladding could be done; seemed to be getting closer and closer with some speed.

I got the veg stew cooking on the crock-pot. I used a bay leave today, fingers crossed it tastes okay.

Still, no Porcelain Throne demands were made of me, yet?

Got the nibble box filled, gifts and raffle prizes in the bag ready for the Social Hour.

Back on the computer and finished the Wednesday Inchcock and posted it off. Then made a start on this blog.

There was a sudden dull thud-like noise emanated from the kitchen that made me jump, so I went to investigate.

There were blood and feathers, floating down from above the flat window.

At first, I thought a bird had flown into a wall or window, but the blood was still coming down? 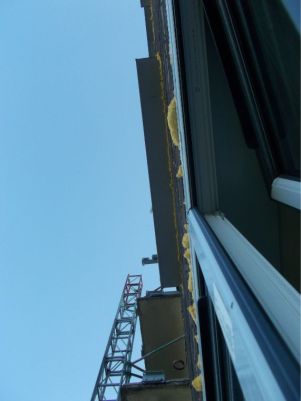 I put the small camera out of the window and took a blind shot off above the frame.

I think that a bird of prey had been for his breakfast pidgeon.

I forgot about making a brew and returned to the computer and carried on with creating this page.

The Virgin Internet or the computer kept going very slow and stuttery.

This depressed and worried me much. So I turned everything off and back on again, giving it a few minutes before starting it all up again.

Seems to have rectified the problem. (He says with high hopes and blind faith!)

The chaps doing the prep work outside arrived at my floor. I think they were putting anchors of some kind in the walls. 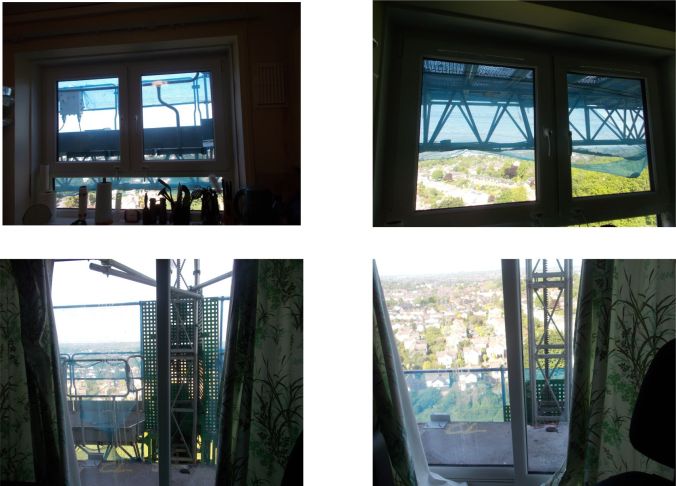 Checked and stirred the crock-pot.

Ablutions tackled. Unfortunately,  I managed to cut the mole on my right cheek while shaving, and it took me yonks to get it to stop bleeding.

Not cataclysmic, I know. Lamentably, this glitch came at the most inopportune moment.

Ruefully, it meant I was very late for the Social Hour.

Out to the Winwood Social Hour meeting. By the time I’d got down and to the ‘Temporary Obergruppenfurheress Wardens HQ, Building Workers Rest Room, Social Hut, Target for Thieves, and Telling Inchcock Off shed’; There were only about eight or nine residents left in there. I felt a right Alter Kocker!

Jenny, Frank, Cyndy, Mo and others. A chat with Jenny, and got the nibbles and cakes handed out. By then most were getting ready to leave. I did feel a fool! Said my goodbyes and departed feeling a little stupid. 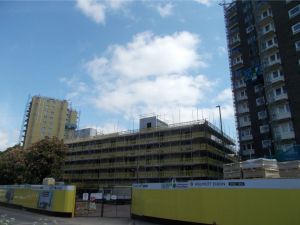 On the way back to the flat, there was a bit of a nip in the air out there. Although the sky looked beautiful.

No one about, I came all the way down Chestnut Walk, through the lobby and lift area, up to the 12th floor and into the apartment without seeing anyone. Oh, no I fib! I did pass the caretaker going the other way and shared greetings with him.

Still no signs of any need for the Porcelain Throne?

Made a cuppa and got on with updating this bloke for an hour or so. Then went onto creating some diary-top graphics on CorelDraw and CorelPaint.

Three hours later, and feeling a little drained, I got some of the graphics done and saved.

Had a check to see if any comments had come in on WordPress. Got one. 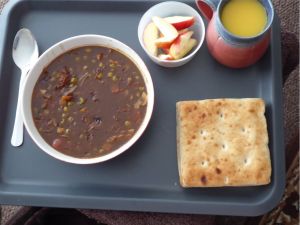 How it will turn-out, I don’t know, but I’ve just had a spoonful of the liquid, it wasn’t great tasting but seemed okay, well, passable.

Got it served up and enjoyed it! Enjoyment-Flavour Rated as 8.8/10.

The tray still on my overgrown wobbly stomach, I nodded off!

I seemed to launch into dreamland immediately, and what an odd dream it was. I was in a desert at night, and wanting for some reason, to sing. Each time I got a few words out, someone would shoot me? I tried and tried again, I have no idea what it was I attempting to sing. But a vulture, sat on a cactus, kept looking at me and winking in my direction? In the morning, I made this graphic, but it is nothing like in the dream, just an idea of what occurred in my not unpleasant, but a frustrating nocturnal nightmare, Hehe!)
I seemed to die and wake up alive in another dessert and still desperate to sing, it started all over again?

After waking up and scribbling notes about this land-of-Nod tale, I could not get back to sleep. Well, I did, but not until hours later. Humph!