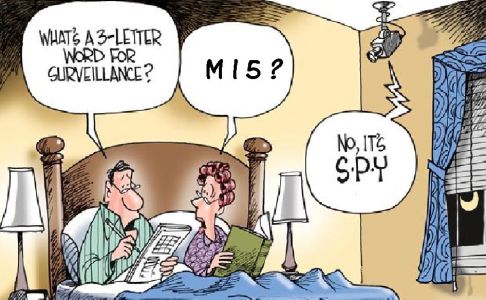 11:25hrs. I begrudgingly woke up with a cracking headache, from my head-butting of the edge of the door frame of the kitchen cupboard I was on my knees emptying out, at the time yesterday, I assume. What a schlemiel!

The mood I was in was not a good one either. Feeling tenebrific about the Spring Cleaning not getting done, and the brain was in one of its “Let’s-Annoy-Inchcock Modes”, determined to riddle my peace-of-mind, by reminding me of all my failures, mistakes and fears!

I had to evacuate the £300 second-hand rickety, rusty, D3-Rated recliner, to get to the Emergency Grey plastic wee-wee bin. The wee-wee was an ELDWWIEWW (Extra-Long-Dribbling-When-Will-It-End-Wee-Wee). Which gave the brain longer to blast me with guilt and humiliation. But, luckily, the wee-wee took so long, I think the brain gave-up, feeling sorry for me. Hehehe! I took EGPWWB (Emergency Grey Plastic Wee-Wee Bin) and emptied and disinfectanted it. I was amazed at how full it was.

Into the kitchen, what a sight it was too. A right mess from where I’d taken out the things from the cupboards already done, and they were spread about waiting to be moved to a new home. This did nothing for my morale either. Tsk!

I got out the thermometer, eye drops, ear drops, hypodermic, morning medication dose pots, medicines, the hemadynamometer, and got the Health Checks done.

As I was thinking of how decent the readings were, compared to earlier in the week, another wee-wee was needed. Then the Porcelain Throne was required. So, off to the wet room. This time it was an ephemeral effort. A VSWWW (Very short-Weak-Wee-Wee). The evacuation went very good, no bleeding from the rear end, and not too messy at all. I did have to clean-up and applied some Daktacort Nitrate Hydrocortisone cream to the fungal lesion, though. The headache was beginning to ease a little now, and no pain from the scratch/bruise on the head, unless I caught it against something. Things were looking a bit brighter and better, now.

I checked the pins (legs), the water retention seems to be reluctant to flow down the legs this morning. It looked like many of the blood papsules had disappeared too. Most mysterious!

Got the kettle on, and made a brew. The view through the window revealed it was raining, so

I took this mornings shot through the closed, unwanted, light and View-blocking closed window.

I got the computer on and got yesterday’s post updated, finished and posted off to WordPress.

Did the WP Reader section, and got caught up with them at last. I had a comment come in, from Tim Price, and something he wrote, inspired me to do an ode. I got straight on with it.

It took a few hours, but I think it comes over as rather funny.

The wee-wee’s are definitely of the VSWWW mould now, but getting more frequent.

I tried to delete the no longer in use Google plus send-to button on WordPress. But blown if I can find out how to! Twit!

Got some corn flakes for brekkers with another mug of tea. 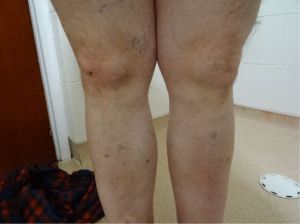 Got the ablutions sorted out and all changed, the pins were photographicalised for posterity. No apparent change to how they were looking earlier.

And then I set about emptying the kitchen cupboards out, under and to the side of the sink.

After about an hour, I abandoned the mission, due to Duodenal Donald and Anne Gyna were not liking me bending and stretching so much.

ing the cleaning products all over the kitchen floor, and this lot from only one of the cupboards.

It looks even worse than it did yesterday, now!

I poddled to the waste chute with the black rubbish bags and placed them down the chute. Then took the recycling bags and a bag of

recycling glass down in the lift.

It was a bit windy out there, but the rain had stopped.

There were around eight workmen around the lift platform as I made way around the temporary white fencing then the machine to get to the bins at the back. I don’t think they even noticed me at all. Mind you they were buried in conversation with each other.

I took another photo before going back in the apartment lobby.

I dropped duplicated cleaners and food on the coffee table. A woman and her man passed, and I gave them each nibble bar. I was annoyed at missing the Winwood Social Hour, but glad that Trevor was on his way to see me.

This did not occur, as will be explained later – Grumph and spit!

Back in the flat and Sister Jane rang. She’s going to the City Hospital this morning for her bent-over, gnarled toes to be X-Rayed. After telling Jane why I had to stop doing the sorting-out this morning, because of Anne Gyna and Duodenal Donald, she said me I have to continue with doing the cleaning up and must not stop or give up! I’m beginning to worry about my telling her what I was leaving in my will to her? Hehehe! Only joking… I think! Hehehe!

I went on Facebook, and my old mate Trevor told me he would be calling to see me on Thursday 14th, not today, the 7th! So, I missed the Winwood Social waiting for him to come! And he will, next Thursday and I’ll miss the Social again! Ooh, I am miffed! I’ll ask him if he wants to come with me to the social.

Did the Health Checks, took the drugs and got on with updating this blog. 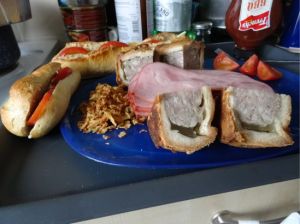 I had a very early nosh. And a grand tasting one it was! I had a small and a very small buttered sourdough baguette with the fancy Sicilian tomato slices, no salt needed with these flavour-ridden fruits. The Melton pie had lots of jelly in it. A few roast onions made up this delightful repast.

As I did what bit of washing up that was I needed to do. The view of the rain through the unwanted, thick-framed, light and view-blocking new windows. Cunningly installed in ‘Anti-aged photographer fashion’, so I cannot get to some panes of glass to clean, nor take any photographs downwards of Chestnut Way without using the step ladders, made me feel glad I had not gone out. Hehe! 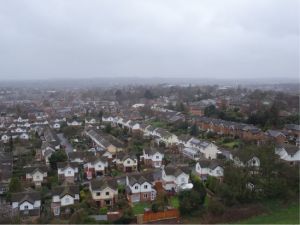 By the time I’d done the Health Checks and forgot to take the medications (I didn’t realise this until the following wake-up time), the rain had stopped.

As I stood there in the kitchen, I had a scary Mind-Muddled-Moment. My thoughts were suddenly disjointed, semi-incoherent. This only lasted a minute or so, but during this short time, I had no idea what day it was or why I was in someone else’s kitchen? For I genuinely thought I seemed to have been transported somewhere. The mess in the kitchen from the abandoned cleaning up session confused me. Shook me a bit, but I was soon back to my usual docile-accepting-fate state.

As I got down to settle for the night, a new ailment, Coughing Carole kicked off. Persistently. Hey-ho!