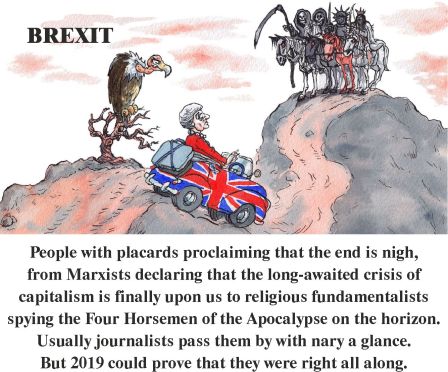 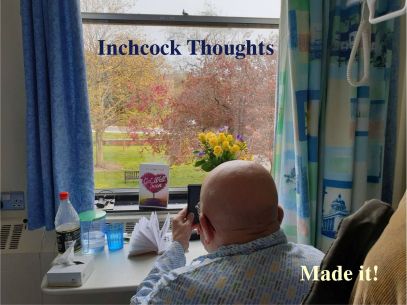 03:25hrs. After a night of oh, so many WPSWWs (Weak-Painful-Spraying-Wee-Wees), that together would not have filled a small cup. Naturally, I was still tired. I woke in need of another visit to the EGPWWB Emergency Grey Plastic Wee-wee bucket (And peed-off, Hehehe!), out of the £300 second-hand, c1968, grotty-beige rickety recliner, and to the bucket. I reckon I passed enough this time, to wet a cotton wool bud, but not saturate it! I must tell the nurse about this ongoing problem.

Then as I was getting myself balanced and sorted, a call to the Porcelain Throne arrived, and with some urgency about it for once. Unhesitatingly, and with high hopes, I grabbed the stick to facilitate a quicker journey time, and shot (Well, that may be a little overdoing it), to the wet room. Where to my surprise, a motion was passed at last! Painful and not a lot, but more than for days now. A multi-coloured offering; that left a frowsy, mephitic aroma, that I hope will hold no pheromonic content. Haha!

I wish there were a kind of panchymagogue available over the counter, I might have tried some. Hehehe!

I sorted the morning medications and had a search again, for the thermometer. (I found the box days ago), but the machine needed finding. To my own amazement, I found it in a

drawer I must have searched in several times this week. What a putz! 35.4° Low, was the reading.

I got on the computer and updated the Wednesday post.

I believe that my blog, is a way for me to desarcinate my problems, and write in such a way, humorously; that it may encourage readers to have a laugh at my antics and Whoopsiedangleplops. And I get the satisfaction in return when it does. I don’t know why I said that! Hehe!

I got the post finalised and sent off, at last.

Then, I set about sorting the old hearing aids, cleaning, getting rid of the wax, and drying them and refitting. During which, the Carer arrived. New chap again, name of Chris, decent sort of chap. He got the hang of the Ankle-Support with the help of the larger photo I’d put on the computer, no bother.

After he had gone, the Axonotmesis ridden right leg went into one of its ‘Shaking Shaun’ Modes. Honestly, if anyone had seen it belting away on its own accord, they would have thought it was a comedy sketch! Hahaha!

Several more unnecessary trips to the WC, well for what came out, every WPSWW was nothing more than Inchcock giving out ‘Oohs and Arghs, as he lunged over the raised toilet, knowing he should have used the EGPWWB really, cause the few seconds of splashed needed cleaning up every time. Most vagarius! Humph!

I started this blog going and made a Thoughts and a page top Brexit graphic. While listening to the noises from up above. Scratch, tap-tap bang!

Around 09:00hrs, I checked the calendar to confirm today’s appointments.

Afternoon sessions that are going to guarantee sleeplessness for me. But you never know nowadays.

I gathered the raffle prizes and nibbles in the walker-trolley, ready for the Social Hour at the Nottingham City Homes, Winwood Heights Flats, and Administration shed for the Generalleutnantess Wardens Temporary HQ, Sarcasm & Insult distribution area, Tenants Socialisation Shed. Rumourmongering Clinic. Telling Inchcock off Zone, Things like crockery and pottery to be stolen from, and the much-used emergency Toilet.

Took the nine black bags to the waste chute and set off down and out to the Social Hour. A long time since I’ve been to one, looking forward to it.

The legs and ankle felt reasonable this morning, as I plodded along Chestnut Way with my Three-Wheeled-Walker.

There were very few people about, and I did 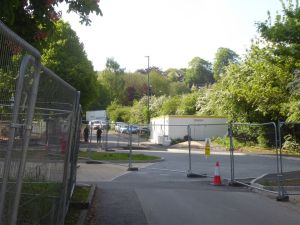 not see a single worker on site. Might be there tea-break time.

I limped along at what I thought was a fast pace, and was overtaken by a lady with her Three-Wheeled Walker. Left me standing she did! Haha!

I got a decent welcome when I entered the hut. I put the raffle prizes on the trolley, and Cyndy handed around the nibbles for me, Bless her! ♥

I spoke with Big Brian, getting the conversation going, and I sensed that I needed a wee-wee. By the time I had stood up, it was too late… I had an accident and the fluid escaped of its own accord! The embarrassment crescendoed, and I had to leave for fear of any smells that may humiliatingly show themselves. Thank heavens that I had the Protection Pants on, at least. Another Social Meeting ruined for me! This Stroke is making life so hard, wearying, worrying, debilitating, fatiguing, daunting, and stressful. Still, I’m still here. Na-na-na-nan nana! Hahaha!

I beat a quiet as a possible retreat, back to the flat and the wet room to freshen and clean things up. The shame helped me move faster, I think.

It may be all that time with the catheter on in Hospital that is part of the reason. I recall they were about to take it off so the body could get used to handling thins itself when  I found I had an allergy to one of the new medicines. That took a few days to sort out, by then, they needed the bed and moved me to the Residential Home at the Acorn, no, Oaks. So not much time for the bladder to get working again. I’ve not had a proper wee in eleven weeks! 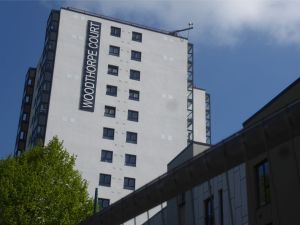 I did stop a minute to take a shot of Woodthorpe Court, though. Snapped it so quickly, I was surprised how well it came out.

As I got to the flat door, I pressed Josie’s doorbells, but no answer. I got inside and put the trolley in the spare room, and then to the wet room and washed my crassulent body, and put new fresh PPs on. I felt a little better but still self-conscious and aware of my Whoopsiedangleplop, and a little guilt-ridden.

My doorbell chimes rang out with Dusty Springfield’s “I only want to be with you” tune. It was Josie, she was in the shower when I rang. I asked if she would like some Cheesy Potatoes this Saturday, and she seemed agreeable to that. I get pleasure out of cooking for someone, it’s been donkey’s years since I have before. The conversation was not easy. Josie’s hearing worse than mine, and with my current hearing aids awaiting having new moulds fitted, and the old ones I was wearing seemingly gone to pot, it was, to say the least, an entertaining gossip. Hahaha! Cheered me, all the same. 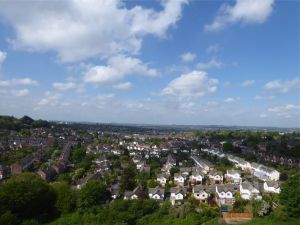 I stirred the Gungo beans again and got the computer on to update this post.

Went to make a brew, and took these pictures in the sunshine, through the unwanted, multi-paned, light & view blocking, this framed new kitchen windows.Bootiful!

The camera battery-light flashed. So, I put it on to recharge.

I used the new Panasonic to take this photo.

I’ve got three medical staff coming to see me at the same time later today. That should be fun trying to hear what they say! What next can go wrong? I’ll take that question back. Please, I don’t want to know. Oy Vey!

Did some TFZer Facebooking and went on the WordPress Reader.

In the space of ten minutes, I had Nurse Jemma and a student nurse Muhsina, and Caroline and Sonia in the flat. Pandemonium reigned. Cause of having no hearing aids, things got a little confusing for me. Hehe!

After some initial sorting out, pandemonium, brouhaha, hurly-burlyness ensued. And it was good! Nurse Jemma and Muhsina were left in the flat, for her to try and sort out the medications for me. Caroline, Sonia and I went outside, to try out the four-wheeled-walker they had brought for me to try out. It is naturally more significant, but so much safer! Bless em! ♥ Plenty of comments from the gals as we passed by in the lobby. Haha! I took the camera with us, but I forgot all about it. Humph!

When we got back, Jemma had done an excellent job and took me through the current medications. She had called the doctors and the chemists for me. And arranged for someone from, ‘Medical Compliance Service’ to call and see me on Monday, about blister packs that she had also organised, and the new medications.

Caroline and Sonia, gave dates for their next visits, and we spoke of so much safety methods, antics, etc. and much more that I just cannot remember. The pair left, with me a more contented person for their visit.

Jemma went through the medications as were in the drawer. Told me not to use the Gee-up pills or magnesium at all again. Taking my pulse took about eight attempts and two machines.  I joked that I must be dead! Hahaha! Jemma, aware of my wee-wee problems, got me supplied with some urine in a sample bottle and she checked it against the listing. Seems I have a urine infection and need some antibiotics. Which she had already informed the doctors and arranged for a prescription to be sent to the chemist – then offered to fetch and return to the flat with them! Off she went, leaving me a pleased and happier person.

I got the beans stirred and on a low heat. And the oven warming. Updated this blog, again.

Jemma returned, with April’s prescriptions! She explained they had been forgotten about by Doctor, and the Chemist! She reminded me that the Antibiotic course could turn the urine green or brown, but this is to be expected and of no concern. The tablets are to be taken four times a day, with food, to avoid sleepiness and something else, I forgot what it was. They are named Nitrofurantoin.

She went through the bag and found several more medications that are no longer to be taken. I must take these to a chemist for destroying, or could give them to the ‘Medical Compliance Service’ man or woman, on Monday or Tuesday.

With helpers like Caroline, Sonia, Jemma, and Muhsina, the Stroke was almost worth it!

I was well shattered when they had all left, but in good spirits that someone really cares.

Updating this blog, and Nottingham City Homes Housing Patch Manager and Belly-Dancer Angela rang me. She had read the Inchcock Today and informed me I could use the shower any morning at 0700hrs. That was kind of her. ♥ I thanked her for her concern and kindness.

Got the nosh prepared and served up. Taking the medications, starting the antibiotics at the same time. I looked it up: Nitrofurantoin is an antibacterial drug used to treat urinary tract and bladder infections caused by Escherichia coli or Staphyloccocus saprophyticus strains of bacteria that are sensitive to this drug. By gum, that makes me sound clever, 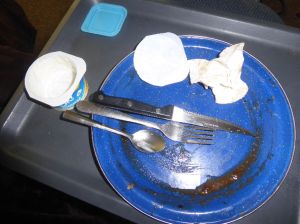 I did take a photo of the meal, but I had left the SD card in the computer. Gnash! I found out when I took this picture later. I had actually eaten all of the food! First time in ages. Must have been the attention of the ladies that perked me up! Certainly brought my appetite back! Hahaha!

And getting to sleep was no problem either… ZZZ!