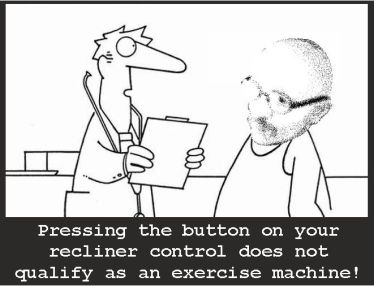 23:45hrs. I woke up with the brain in confusion. The regular rampage of fears, embarrassments, and uncertainties kaleidoscoping around harassing my mind, like a nubivagant bird in turbulent skies. Determined, irritating, disturbing, and tenacious.

Fortunately, the moment I tried to move to check if any nocturnal nibbling signs were about, the pain from the boil, Duodenal Donald, and the bloated-hard legs, rid me of these brain-bothering discomposures.

I operated the lift button on the £300, second-hand, ci1968 rickety recliner, it worked on the third press, and as I stood up, the smarting sole of the left foot was so tender, it made me jump and I toppled-over onto the foot-ottoman! After extracting my lumbering jelly-mould-stomached body from the footrest, I had a feel around for any injuries. Apart from a bit of scraped skin and a small blue bruise already coming up on the shin, all looked and felt well. My embarrassment and frustration were not. Hehehe! 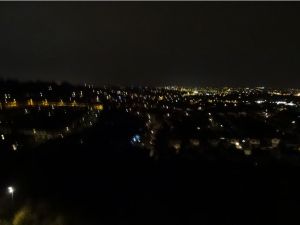 I limped to the kitchen to get the kettle on. I opened the unwanted unliked new window, with its glass I can’t access for cleaning and its view-blocking, light stopping thick frames, and took this picture, while I waited for the kettle to boil.

That chug-chug noise was heard again. And, I did not have my hearing aids in?

The summoning to the Porcelain Throne arrived, so, off to the wet room. A messy evacuation. The boil on the bottom was tender, too. The Fungal Lesion had been bleeding. The boil on the thigh seems to have disappeared? The bum-boil stung something awful. Duodenal Donald turned a bit nastier. The leg-ulcer feels like there are worms inside and resisting scratching it is hard. And then I dropped the crossword book into the toilet bowl! Not one of the most comfortable starts to a day I’ve had. Haha! But, I have had far worse, so, no going off into throwing a moody mode from me this time. 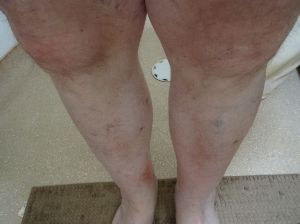 I checked the pins. It looked like the leg-ulcer really was making a comeback. It seemed to be getting redder than it was last night. The tingling and itchiness are getting stronger. Still, maybe this will not be a bad thing if it does return. Then I will have something to show the staff at the  Mary Potter Health Centre, instead of just photographs of what it looked like eight weeks ago when I first visited my Doctor, and she took a swab, and said ‘In about two weeks you will hear from the Health Centre with an appointment for them to look at it. The little fibber, her! Hahaha!

Got the cleaning up and medicating done, and returned to the kitchen. Made the brew and got the Health Checks done. 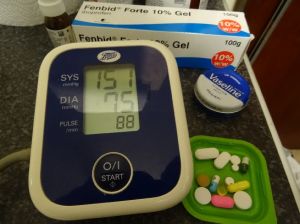 The resulting figures seemed okay to me, apart from the increase in weight. I’ve never been heavier in my life! I hoped this was just due to fluid retention, but I don’t know.

I imbibed the medications and creamed the three areas in need.

02:15hrs. Back to the front room, and got the computer on. Then I realised I had not taken any Furesomide tablets. So I had one-and-a-half, to try and clear out the water from the painfully bloated legs. Being a Saturday, I will not be going out, so in case the wee-wees start coming, it will not matter. I got out and disinfected the EGPWWB (Emergency Grey Plastic Wee-wee Bucket) ready, just in case things get over -wee-weeish. Haha!

03:15hrs. Making a start on updating the Friday blog, and the first wee-wee arrived. It was in the style of an LHBLWW (Long Hosepipe-Blasting like Wee-wee), but without any splash-backs on this occasion.

I pressed on with the diary. 03:40hrs. The second wee-wee activated. I only had two paces to take from the computer chair to the EGPWWB, but only just made it in time! This time it was an ELDOPWW (Extra-long-Drawn-Out-Persistent-Wee-Wee). I shook some of the freshener capsules into the bucket afterwards, and they frothed up and nearly came over the edge of the bin! Blimey, what’s in my wee?

Posted of the diary and made a start on this one. Went on the WordPress Reader section.

06:40hrs. Then went on CorelDraw to make up some page header graphics. Got them made up by 0915hrs and made a brew before going on to create the templates. All this time, Iand I only needed one wee-wee? A bit concerning having taken the Furesomide?

Made the brew, and pored it out to brew for a couple of minutes. I spoke too soon about the wee-weeing, I had to hasten to the EGPWWB, and have a UWTWW (Unwilling-Weak-Trickle-Wee-Wee), despite the feeling it was going to be a hose-pipe-like job, it wasn’t?

Washed up, and fetched not as warm as I had hoped mug of tea. Tsk! Back on WordPress to make up the drafts. All done at 11:10hrs. And with only one wee-wee being needed. Very complicated, trying to work out why it is not flowing, especially after my taking two Furosemides?

I got the kettle on. 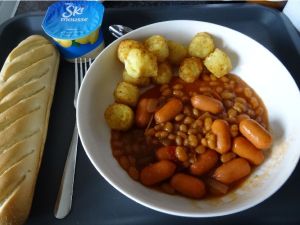 Fodder readied. The mini-chicken-sausages and potato mini-hash-balls were delightful. The highlight of this meal was the seasoned baked beans, though. Here is my recipe (using canned beans in tomato juice). Seasoning: half a teaspoon of demerara sugar, generously poured over distilled vinegar, mustard and two big spoonfuls of Chinese sweet & sour sauce! Mix the added ingredients and leave to marinate, stirring occasionally. When you get the saucepan on the heat, keep the heat on low, but for a long time. I did mine for forty-minutes on the lowest setting, then, just before dishing it out, I turned up the heat, and stayed watching over it and stirring all the time. (From the best selling, Inchcock Craddock Cookery Ideas. Hahaha!) Bootiful! 9.2/10.

Got down on in the recliner, and turned on the TV. Had a visit from Dizzy Dennis while I was watching Norman Wisdom’s ‘The Bulldog Breed’. I can’t recall much after this.

4 thoughts on “Inchcock Today – Sat 16 Mar 2019: A tediously natterless, unexciting Saturday. But, I got tons of graphicationalisationing done!”