02:45hrs. Woke up and escaped out of the second-hand, £300 c1968 rickety recliner to utilise the overnight-half-filled EGPWWB (Emergency Grey Plastic Wee-wee bucket). A PDTSAOWW (Painfull-Dribble-Trickle-Spray-all-over-Wee-wee) class one. I anticipate struggling to pass all day again, on and off, mostly on.

Memories of the nightmare-dreams flickered into and out-of-the brain-box. Positive recall for once I think, but they faded as fast as they came to me. Tsk! I felt they were of an unpalatable-nature, though, with some touches of fear involved somewhere.

I cleaned and disinfected the EGPWWB, and had a shower, shave, cleaned the teggies, got the bamboo-socks on, using the glide, and had a failed attempt on the Porcelain Throne. Come think of it; it should be the ‘Red Cross Supplied Raised Plastic Porcelain Throne with the Rusty Metal Supports that Wobble’ to be right, nowadays. But it’s too big a mouthful to use. Hehe!

Got dressed then I took the morning medications. Taking an added Senna to hopefully move things in the rear exit department; it’s been a day or two since any successful evacuation has taken place. And the last wee-wee encourager-tablet from the Care Home. Hey-Ho!

The legs and arms were beginning to give me some sudden bother from Colin Cramps and Arthur Itis. So I applied some Fenbid Pain Killer on bothering knees, shins, feet, and wrists. The feet and toes were stinging badly, too, but they need the Chiropodist’s visit badly.

Put the new socks on, using the sock-glide. They are shorter than the others. The legs seemed a little more blotchy and bloated than of late.

I updated the Notes for the nurse’s visit.

Another wee-wee, now in the form of an RPDDWW (Reluctant, Painful-Dri-Drip-Wee-Wee).

I started this post, and then finalised the Friday one and posted it off.

I felt the most welcome need for the Porcelain Throne! So, off to the wet room. Partial success, but at a high cost! It took me about twenty minutes to get things started, then half-way through, I did some of the crossword book puzzles, while I waited for some sort of completion. (Not agony, but it was painful) When things were over, surprisingly it was a messy affair with only a tiny… Well, ever mind!

The cleaning up afterwards took another twenty-minutes, oh what a state! The new socks felt very loose and thin, but they were comfy, and warm enough.

After another RPDDWW, I hobbled to the kitchen to make another brew of tea.

Espying the amazing looking orange/red quarter moon in the sky, I got the camera and took this shot of it. I had to make five efforts to get the picture something like it really was. This was due to the right-side shakes from Dizzy Dennis, and or the Axonotmesis.

06:55hrs. Awaiting the carer to put the Ankle-Protection Strap on for me.

0720hrs. Titivating on this blog, and made a mug of tea. 07:35hrs. A new carer arrived. He soon mastered the Ankle-Retention-Strapping. I’d got the socks on. So, no need for any help with anything else. I mentioned about the appointment with the Audio Clinic on Monday and cancelled the carer for that day. I’ll have to leave the Ankle thingy and socks on overnight? I dare not ask them to call, in case they arrive late, and I might miss the bus into town. I’ll do it now,  I must sort out the bus timings and fare needed.  All sorted, (I hope), Stop S48 (Winchester Street, Time Monday 13th May 2019: 07:225hrs, Fare £2.30!

Another wee-wee, now in the form of an RPDDWW. Better get things ready to go to Sherwood for some bits. 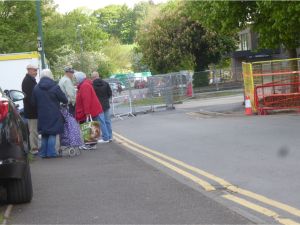 Took some black bags on the way out, deposited them in the rubbish chute. And down and out, called in the Nottingham City Homes, Winwood Heights, Hauptbereitschaftsleiteress Warden’s Temporary HQ. Sarcasm & Insult distribution area. Tenants Socialisationistical Meeting Shed. Telling Inchcock off Zone. Where things like crockery and pottery get stolen from, Rumourmongering Clinic, and somewhere to rest while waiting for the bus, Portakabin. A few residents about, who were taking a peek at the cheapo-out-of-date-vegetables on sale. Some of the residents’ panel in there as well. No one was interested in chinwagging, apart from Mary. Lady asked me if I wanted a cup of coffee. I declined and thanked her. So I had a walk outside to get used to the three-wheeled-trolley-guide for ten minutes or so, up and down the road. When the bus arrived it was a Bestwood bound one, that and I and many others needed. And some nattering began, which I enjoy.

Dropped off in Sherwood and went into the Post Office shop. Got an egg sarnie for breakfast, a Polish sourdough slice loaf and a bottle of spring water. I dropped the bread putting it in the trolley, and a lady picked it up for me. Again a stranger asked me if I was alright, and told me I looked pale! Hehe! Bless her for the help.

I departed, out and across the road and into the Wilko shop. I came out with a bottle of liquid soap powder (which seems to clean the ankle-support, well), a can of deodorant, and a sink plug. The finding of the sink plug was interesting. After walking around and searching without any luck, I thought I’d try to find someone to ask their location. I bumped into a neighbour, Malcolm, and asked him if he knew where they were, and he guided me back to where I first looked, but they were electrical plugs. A good job I passed Malcolm again and ask him once more, for he found them for me. Tsk! 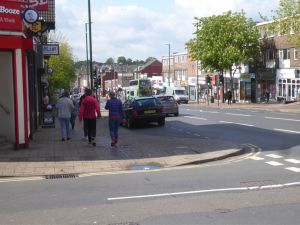 To the Co-op next. They had some nice looking Piccolo tomatoes that I bought, along with two potatoes, that will do for Doris’s nibble next Saturday. I’m so glad I can do something in return, and I think Doris will accept some baked-cheesy potatoes every Saturday, now. And I love doing them. (And eating them, Hehe!)

To the bus stop and a nattering session as about six of awaited the L9, back up to the flats.

During the walk back from the bus stop to Woodthorpe Court, sudden fatigue overcame me, and it took me what 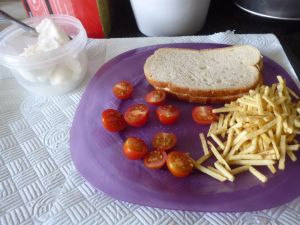 I called at Doris’s, to remind her about the upcoming potato-feast. Back to the front room

But hunger got the better of me, and I had a snack first thing… well, after another PDTSAOWW! 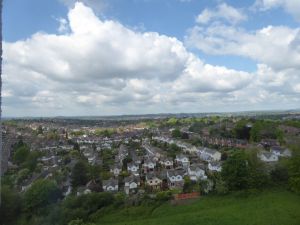 The weather brightened up, and I took a picture through the unwanted, light & view blocking, multi-glass needing cleaning that I cannot reach or get to do so, kitchen windows.

I then got the potatoes in the oven. And sat down and fell asleep in a short time.

Woke and checked the potatoes, they were done ready for being mixed. I halved them, but split the skin in one of them. Scooped out the potatoes into a big basin, added much mature cheddar, distilled vinegar, a bit of butter, and some salt. Replaced the well-bashed up mixture, back in the husks and got them in the oven on a high heat. Kept an eye on the now three instead of four baked spud-halves. But they were well filled! Made up a nosh for Doris, two halves of cheesy-potato, and some Piccolo tomatoes, halved and salted. Then the pleasure of taking the tray to Doris. I hope she likes them.

Back to the flat, sat down and fell asleep in true style! Deep sleep! Woke up around 1740 hours, when the door chime was ringing out. It was Doris returning the washed tray bless her, and saying she enjoyed them. That made my day!

Doris (although, I found out she is not Doris!) was with me in the kitchen, she had brought two big spuds for the next nosh, bless her! It then transpired that her name is Josie, or Josephine, Josephine or Jose. I did feel a fool! She kindly added that she responds to Doris, as well. Hahaha! 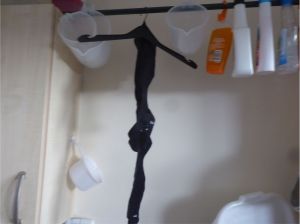 I took the evening medications.

Then I set about taking off the Ankle-Support, it was no bother at all, I’d got it off in about fifteen minutes or so. Got it washed, using the bowl and some liquid soap flakes and hung it up. For it to hopefully dry in time for the carer coming in the morning to fit it on for me.

I got the computer on and updated this blog as far as here. Made a brew. Went on WordPress reader.

Shattered again. Late now for me. I reheated my cheesy-potato and imbibed it with a drink of spring water, then took the medications late.

Got done and settled in the £300 second-hand, c1968 rusty recliner for sleep, but the head was spinning with my faults, mistakes and bad choices made, and it was ages before I could nod-off. Humph!

4 thoughts on “Inchcock Today – Saturday 11th May 2019: Wee-Weeing ruled the day – but chinwagged with Josie.”