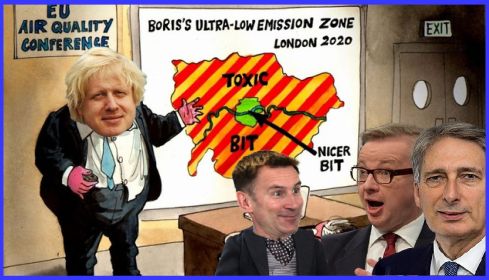 03:00hrs: Stirred with the mind in a state of ‘Thought and worries’ blasting away. The need for a wee-wee arose, and so did I, from the Brother-in-Law Pete damaged ,while he was flat-sitting, when I was in hospital, as he fitted new CCTC cameras, and searched for my valuables, which he found and took, I still haven’t got them back yet four-months later, £300, second-hand, near-dilapidated, gungy-beige coloured, c1968, sometimes working, uncomfortable, rickety, rinky-dinked, rattling, rusty, resurrected, reconditioned, recalcitrant, recidivating and rotting-away recliner. The half-filled GPWWB (Grey-Plastic-Wee-Wee-Bucket) was utilised for an astonishingly violent CMOUSTSTBO (catching-me-out-unwilling-slow-to-start-then-blasting-out) evacuation.

Gingerly, I hobbled to the wet room with the bucket for cleaning and sanitising, and the Porcelain Throne was needed. Oh, flipping ‘eck! Back to the constipational-mode this morning. Plenty of silent, oohs, arghs, and weak cries of agony! But at least it was not messy when it finally arrived. Haha!

I moved the handwashing, took the medications, and realised I had not taken the evening ones! The worry about getting to the After-Stroke session weighed on my mind. This was not going to be a good day, methinks?

So, I got on as quickly as possible to update the Monday post and got it sent off.

Made a start on this one, and it was time to get the ablutions done. So, off to the wetroom for a stand-up session, it was too early to use the noisy shower.

I thought I’d got everything checked and in the pockets or bags, and set out.

As I walked along Chestnut Way, I stopped to take photos of the new Electric point on the new car park spaces outside Winwood Court. Boing! No card in the camera! This proved to be more of a handicap than I thought at the time!

I hurried on to the bus stop on Winchester Street, sorting out the £2.30 bus fare as I went. As I approached the bus stop with two minutes to spare, the bus came up the hill, and I missed it! Humph!

Annoyed with myself, I walked down into Sherwood and caught a 58 bus into town. Straight into Tesco in Victoria Centre (Mall), and asked a chap if they sold SD cards “Aisle Seven!” I am glad to report that on arriving on the section, I found the SD cards, that were a reasonable price, and bought one. I had a search around for the Flaky Fingers and bought several packets. I got a bottle of handwashing liquid and went to the checkout to pay for the goods.

I asked, and the lady was kind enough to open the deadly-to-me, blister pack and removed the card for me. I thanked her and departed, takin this first photo on the new card. Of the early morning mall, peopleless. Haha!

I had the time to wander around and visited the M&S Foodhall, taking some photographs en route.

On the way to the M&S Store, this bit of Nottinghamian Street Art, from the Council, seemed to have seen better days. The unfortunate thing was well-bashed about!

Finding the M&S lifts at the back in the corner, I ventured down and bought some dangerously overloaded with sugar and fat, naughty finger cakes, and a ready-made Lamb Moussaka. And a box of lemon teacakes, to share with the After-Stroke gang.

Then out and to the Poundland Store, with the trolley full already. I paid at the self-serve checkout, with the help of a kind lady assistant, and filled the spare carrier to capacity! I left with a Pork Farms pork pie, drain unblocker, Dettol antiseptic disinfectant, a BLT ready-made sarnie, honeydew coated cashew nuts, and a pack of jerk-beef to chew on.

I had an amble around taking shots at random.

I made my way to the Torture Session, taking this shot of the frontage of the Trent University Main Building, on Goldsmith Street, the tram lines in evidence.

I had a walk up Chaucer Street, with it being a road I have not been up for over 65 years. I think about 90% of it was a maze of new buildings, offices, college property, private car parks mostly. But I found near the top, what I think were the old NHS Children’s Eye Hospital place. I came to a block of old buildings. I recall dear Mater taking me there as a youngster, and learning that I was colour-blind. Ah, the memories! Someone told Mummy-dear that she should not be smoking in the surgery. She picked me up, and we left, never to return! Many years later, I applied for a job as Guardsman on British Railways and went to Derby Station for a medical. Bit of a disappointment, they discovered I was colour blind on red shades! Ah, I just love it when memories flood back!

The Torture for Pleasure – Keep Smiling – Calaboose Session: Hehe! I returned to the present day and hobbled back down the hill to the Church Hall and the After-Stroke donjon. We looked a little thin on the ground I thought, but it’s still early days yet. Compared to last week’s first session of about eighteen of us, we were today about only twelve, and that included the two ‘Specialist’ trainers. My ‘partner’ did not arrive, and all of us were split into threes, apart from Precious and myself. The whole thing went by quicker but actually took longer today. The series of exercises, with just me and Precious, both being about the same handicap-wise, was more enjoyable. We chatted and managed a clandestine laugh now and then. Despite our both being a little on the deaf side.

When it came to the Rest & Relax tape to be played, I went into ‘shut-off mode’. And it looked like Precious did the same. The lady said it suits some and not others. It turned out afterwards that we merry two of Precious and I couldn’t hear a word of the tape anyway. I mentioned this. Adding that this is no bother to me, listening to someone reading on a tape, somehow does not butter the bread for me.

On the break, the gang enjoyed the chocolate lemon flavoured tea cakes, anyway. Being lectured by someone also reading from a guide is hard to take seriously.

I got more out of today’s session, and the slight increase in the exercises did me no harm. I love the “If you can’t or struggle to do anything, do not do it!” Being followed with “Come on, get those arms and legs higher!”

The bowling sessions were almost a repeat of last weeks. There was my ball again, in the closest position, and the final person bowling in every game, knocked my ball away! Hahaha! Just a bit of fun, mind, and to me, a laugh!

We finished, just in time for me to miss the bus home. I mentioned this in a jocular fashion, and was informed in a Sergeant Majorly, rhadamanthine way “Well, you only have an hour to wait!” I’ll keep my wit to myself in future.

I gave my farewells to everyone near me, as we broke up. I got two replies more than last week, anyway. Three! But people were arriving to give lifts to the others, so their concentration would have been on that.

I went in the hope that the L9 bus might be late, to the bus stop, but it had gone, of course, as I anticipated.

The next 40 bus wasn’t due for twenty minutes or so. 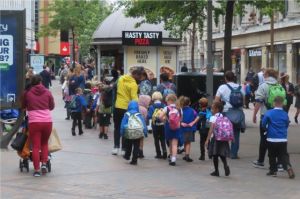 I had a walk down to the Slab Square. And a party of ankle-snappers were being arranged on some visit or other.

I suppose it is with me not having any kiddywinks, but a warm glow comes over me when I see them. I think, with how trends have been and are going, these will make up the next generation of druggies, alcoholics, street sleepers, street beggars, car thieves, muggers etcetera? Maybe, if the country is still going, Members of Parliament? Haha!

I went back up Queen Street and caught the 40 bus. The side-saddle seats on these are at least a little more comfortable. I dropped off the bus, on the Winchester Street, and went

up the hill a tad, to where the central island is to cross over.

Down the hill, despite the protests of the three-wheeler-trolley guide.

I walked the length of Chestnut Way, a bit of a struggle to get by the wrongly parked cars, though, I must say.

Stopping at the new electric car charging point, outside the new Winwood Extra Care Court, to try and take a photo again, this time with an SD card in the camera! Tsk! My sense of humour told me to put the three-wheeler in one shot. Hahaha! There are two bays dedicated to this facility, one was in use by a petrol-driven car. I think maybe overall, there are fewer parking spaces since the upgrading, but I might be wrong… it has been known any times before!

I got in the foyer, and up in the lift. What a mess greeted me!

I got inside, feeling better than I ought to, considering the physio session. I was annoyed by all of the bit of fluff, plastic etc. in the hallway, all being outside my door?

The landline flashed its light and rang out, but stopped before I could get to it.

I stripped and got the handwashing done and hung on the airer. Pondering as I did this, over tomorrows tasks, as I got some triple fired chips in the oven and set the timer. Wednesday is the day for the much-needed and delayed visit to the Sherwood Health Centre Podiatrist. A terrible time for the appointment though, 13:50hrs! Which will mean, I’ll be drained and incapable of doing anything when I get back home. I may fall asleep in the waiting room like I did last time. That wasn’t appreciated by the staff at all, as I remember. 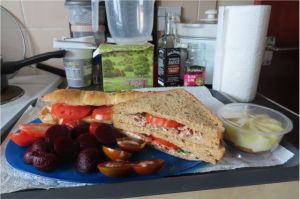 A simple nosh was prepared. Mostly tomatoes. I added all of the giant orange tomato on the buttered baguette and the BLT sarnie. Put some of the brown mini Sicilian toms halved on the plate. Chopped some of the freshly cooked beetroot as well.

A Limoncello dessert to follow. And got down to eat and enjoy it…

The smell of the burning chips in the oven made me faffle-about and get to them ASAP. All was okay, though. I saved a few of them and added them to the plate. Oy Yey!

I got down in the Brother-in-Law Pete damaged, £300, second-hand, near-dilapidated, gungy-beige coloured, c1968, sometimes working, uncomfortable, rickety, recliner, and was soon off into the much welcome land-of-nod!

I woke later, in need of a wee-wee. As I dismounted the reconditioned, recalcitrant, recidivating and rotting-away recliner, the landline went again. I got to it on time, though. It was NCH’s Nichola. She needed to do an interview with me and checked to see if I would be available on Thursday at around 10:00hrs. I concurred and wrote it down on the pad straight away, to add to the calendar in the morning.

I took the belated SGSS (Short-Gently-Sprinkling-Spraying) wee-wee, and returned to the Brother-in-Law Pete damaged while he was flat-sitting, when I was in hospital, as he fitted new CCTC cameras, and searched for my valuables, which he found and took, I still haven’t got them back yet four-months later, £300, second-hand, near-dilapidated, gungy-beige coloured, c1968, sometimes working, uncomfortable, rickety, rinky-dinked, rattling, rusty, resurrected, reconditioned, recalcitrant, recidivating and rotting-away recliner. Concerned that getting back to sleep might prove problematical after being disturbed by the wee-wee and phone call.