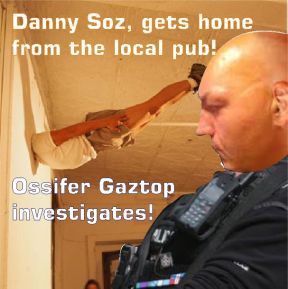 00:35hrs: I stirred into semi-consciousness, greeted by what at first sounded like a giant butterfly fluttering? But it turned out to be a combination of ‘The Hum’ and Flatulent Frank, who was also giving the impression of being a none-stop balloon going down! No sense of needing the Throne though, but the wind rippled out almost continually! Well, it made a change. Hehe!

A wee-we demand arrived, I removed my body from the £300, second-hand, not-working recliner. I rose easily enough on to my feet, caught my balance, got the stick and wobbled over to the GPEWWB (Grey-Plastic-Emergency-Wee-Wee-Bucket), and took an SSPT (Short-Sharp-Painless-Trickling) wee-wee. (the first of many this morning!)

I assessed the ailments en route to the kitchen. Things looked and felt good. Arthur Itis, Anne Gyna, Duodenal Donald, Reflux Roger, Back-Pain-Brenda, Saccades Sandra, Kidneys Kevin, Colin-Cramps, Harold Haemorrhoids, and Little Inchies Fungal Lesion were all on strike I think!  Shaking Shaun, with the assistance of Necodemus’s Neuoransmitters were the only things that concerned me at the moment. 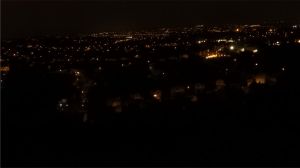 Got the kettle on the boil, and decided to take a shot of the morning view from the unwanted, disliked, light and view-blocking, unable to get at for cleaning, photography-preventing-hating, thick-framed windows. For once it came out not-to-bad. The wind was strong. 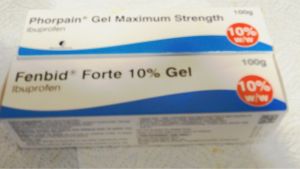 I got the boiling water in the mug and left the Thompsons teabag to soak. Went to get the medications for taking, rubbing-in and massaging, and I noticed for the first time, that pain gels sent this time, were of different names, other than that, the box’s were identical, as were the ingredients! 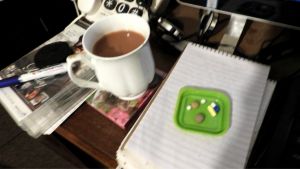 Not to worry though, this didn’t matter, for I had a more significant task now! Sorting out all the loose tablets that have fallen out of their day boxes and got mixed up, in the blister packs. At least this is an improvement of leaving me for five days without any medications at all. Carrington Pharmacy, 343-345 Mansfield Rd, Nottingham NG5 2DA are such little teasers, the monkeys!

As I turned to get the mug of tea to take into the computer room. I never take things that need two hands, for fear of the shakes coming on and dropping summat. Back-pain Brenda and Kidneys Kevin both started off, and so painfully, stab-stab from both of them, it worried me for a second or two. But they both eased off, and it came bearable within a few minutes. Strange that? I can’t say that Flatulent Frank eased off any, though!

I got some graphicalisation done. Sound so easy when you type it, but it took me three hours to do four of them. Then, as I was posting them on WordPress to use later, I realised that I’d put a wrong name on one – so had to make another one with the right name on it, and remove the wrong one! Thunderably-Thick-Fool!

I went to make another brew and have a wee-wee Still of the SSPT (Short-Sharp-Painless-Trickling) fashion!

I took a photograph of roughly the same area as earlier again. I did this one with Nightime Panorama option selected. Made a most-tasty mug of Glengettie Gold tea, and for some reason,. I became addicted and enjoyed it so much.

Unfortunately, there followed several hours of my making a brew as soon as the previous one was drunk or got cold, always interposed with a couple of tiny wee-wees? Oh, dearie me! Klutz!

A determined effort to get the Saturday blog updated was tackled. Hours lost again! Well, not lost, cause I enjoyed it. Posted it off. Then, I realised that I must have left the mobile in my jacket pocket, perhaps? So I got up and fetched it, Back-Pain-Brenda was not too happy with me. I placed it on the 1962 built cabinet where the computer and broken printer sits. There is a space in front of it where the phone sites snugly and handy if it rings, and I can hear it close-by. (It did once, last October I believe) Haha!

Went the WordPress Reader, then Pinterested a couple of pictures. Hour or so later, the Text message noise sounded on the mobile, I put my hand out, and there it was gone! What? Have I had another blank-spell? Has Letholgica Luther had a go at me? Surely this cannot be? It’s sporadic for me to be positive about anything lately. But, I was unequivocal, irrefragable, I put the phone there earlier!

Then, not being the sharpest knife in the drawer, it dawned on me; Hang on you heard the beeping noise, it has to be somewhere close? Well, I looked at the most obvious place first, Looked in the waste bin. Nope! The floor and under the cabinet. Nope.  (Mind you, there was a red-ink pen, a 10p coin, a dried-up postage stamp [Second-Class], and a screw to the mirror that I ended up throwing away because I couldn’t find the screw to mend it with! I never dreamt I’d end up like this, somehow, I expected to avoid going round-the-bend and losing it! Just shows yer!

Undeterred, and with a fresh-vigour, I opened every drawer and cupboard. Checked my pockets. On the bookshelves nearby. Nope! I had a hobble around searching on the floor BPB (Back-Pain-Brenda), getting more and more annoyed with me. I even went back to the coat to see if I’d had a ‘Funny-Turn’ and couldn’t remember taking it back. Nope!

I had a wee-wee, then made a  brew of Thompson’s tea, and returned to the computer. I think there might be some minor-justification for my earlier idiocy… The mobile lay in the waste bin underneath where the phone was, and I’d looked there first! But I didn’t have a feel around inside! The mobile is also black. And an old small one. And I can search for hours for defences, reasons, excuses… But it’s no good. What a Schlub, Schmuck and Schnook!

I’m up for adoption if anyone is interested? Partially house-trained! An excellent maker of cheesy-potatoes? Willing to pet-sit! I’ve got a free-bus-pass? My own walking sticks and picker-uppers! A three and a four-wheeled walker? Tons of old junk for you to play with! It’s not working, is it? All this trying to encourage someone to take me in? Humph!

Ah, well, I found the mobile phone! But I can’t find out how to get to the messages, and I did it yesterday! Oy-oy-oy!

I put the computer to sleep mode, then got on with the handwashing next.

The jammie bottoms, long-sleeve t-shirt and a pair of socks. You wouldn’t believe the mess I got myself into doing it. Anyone who knows me would. Oh, well! Here goes, I’ll tell you! I dropped the bowl and spilt water over me and the floor! I dropped the hangar with the just-washed and wrung heavy jammie bottoms, and back down into the bowl they went to get soaked again! My final Accifauxpas was, I slipped on the water and cracked my right knee against the cupboard door corner! The worst thing about this incident, was because Nicodemus’s Neurotransmitters had failed, there was very little pain at all, which means, when they come back on-line so’s to speak, I’ll be in for it when the message about the knock gets to the brain! But I was all calm and collected about these things, and did not allow myself to get agitated nor annoyed… no, I’m lying there! Sorry!

Having got the kitchen semi-cleaned up, I hobbled off to the wetroom to get the ablutions sorted out. Before I could start stripping off, the Porcelain Throne had to be utilised. But I couldn’t have been in a better location than stood right it, could I? Hahaha!

Well, it was back to the blocked inner-pipes type session! The crossword book was well used, as I waited for some movement to start. I did well actually. I got three answers on a puzzle I’ve been doing for months on and off, leaving only one more needed! When the action began, I hung on to the crossword book. Which was used for another five minutes or so before the half-way-house evacuation burst forth, and oh so painfully! As I got up[ on my pins, the pain from the knee-knocking in the kitchen got through to the brain, I decided to take things steady, the last thing I need is another tumble.

I could hardly believe it, the teggies and shaving went painlessly and bloodlessly. Fair enough, there were a few dropsies. I got under the shower, and Dizzy Dennis paid a visit, but I half-expected him and had measured the distance to the grab rails, so no bother, and he soon left.

I got dressed, I had to, for delivering Josie’s meal. Haha! I then concentrated just on getting Josie’s nosh cooked and prepared. It took about an hour, plus a few minutes washing up after the delivery by Josie’s Sunday Chef (Me!) A good one I hope this week: Parsnips, carrots, garden peas, tomatoes, fish sticks, tuna in brine with mayonnaise mixed in, beetroot. The cheesy-potatoes (I made enough for me have some reheated later), were spot on-the-button (I thought anyway when I tried some). I used Leicester extra-strong, and mixed as well as I could, with butter, sea salt, distilled vinegar and a spot of light soy sauce. Then while the vegetables were in the saucepan, I put the spuds in the oven to brown them off a smidge. Served in on the plate on the tray, added a bar of chocolate and a can of G & T, and got it delivered to her. She seemed to like the look of it, and told me the plateful appears to be getting bigger all the time! I assured her it wasn’t, but I’d spread the fodder out more. Which was true! She gave me a salad pack that had blown a little. I thanked her and wished her happy eating.

Back to the flat, and as I went to the fridge, the salad pack exploded! Bits of lettuce and peppers showered out all over the place! Cleaning up the mess for the second time today now! Spittling-Splurging-Sparrowhawks! But it was a half-hearted session, I’d had enough!

I got onto updating this blog (3-hours job).  Then checked for comments to answer on WordPress, before getting my own dinner, which would be peas, cheesy potatoes and I’ll have a look what’s in the fridge to go with them. 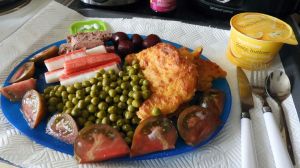 Blow-it, I’ll do it now. The phagomania is with me again. Hahaha!

Well, with it being my Chek’s duty day, I made extra cheesy potatoes when I did Jossie’s meal, (Snigger, Joy!) and made enough for some for myself. I reheated them in the oven until they were crispy on the outside. All the rest of the nosh was cold stuff. The black tomatoes were especially tasty today. Fish sticks, mushroom pate (also highly-desirable flavour-wise), garden peas and beetroot, these were not so good, I couldn’t eat them all, they were like purple-ball-bearings! Tsk! But all the rest got eaten, no bread either, that’s still foreign to me, not having bread! Taste-Rating was still a 7/10. Mouth-watering! All bar the beetroots.

I started to watch some TV. A corny, poorly made film about Locusts who turned into carnivores, and a documentary on the Nuremberg Trials on another channel. Each time the advertisements came on one, I’d nip over to the other, and visa-versa. Farcical! I was getting no satisfaction at all, so I abandoned the film. And fell asleep watching the Trials documentary!

Repeatedly waking up, the nodding off again all the time. Which, rest-wise, was a waste of time! Hehe!