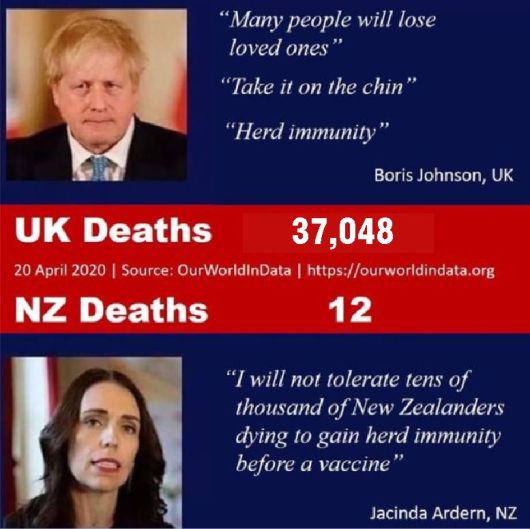 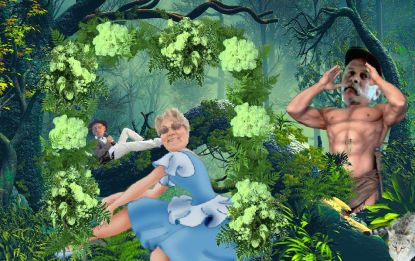 02:15hrs: Having had a wee-wee-less sleep, I returned to the land of the imitational-living, in need of one. The toes, ankles and feet were not enamoured with my getting my overly stomach-burdened body almost perpendicular. Despite the urgent need to get to the wet room, I was very cautious and careful in getting the walking stick, and my route to the throne room. For fear of the ankle going over again.

Which resulted in an embarrassing leakage en route. Saved by having the PPs on, from a severe ‘wetting of the wet room’, the wee-wee, was of a cloudy and pale SS (Short-Sharp) variety. Proper washing of specific areas, change of PPs, and off to the kitchen. (No indications of the heavy-duty Porcelain Throne being needed) 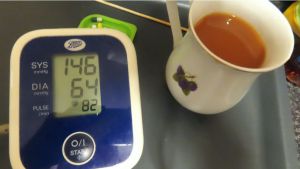 I got the tablets out, made a mug of Thomsons Punjana tea, then the carefully done job of sphygmomanometerisationing. The dang sys was a tad high again, but it’s been worse. The pulse was higher, but I think within range. The thermometer showed ‘Low’. Took the medications, leaving the other not eatable medical tasks until I did the ablutions, later on. Then back for another wee-wee, the same type, but a little longer lasting.

Back to the kitchen, gathered and sorted the black bin bags, and tied them up ready to go to the chute. Then, back for another wee-wee. Oh, dearie me!

I got the computer on, and the moment I started on CorelDrawing to do the thought graphic, Shuddering Shoulder Shirley kicked off, soon to be joined in the ‘Let’s Annoy Inchie’ mission, by Saccades Sandra. This made progress very slow. However, I seemed to be in a rare mood of resolution not to get myself all bothered and flustered. And this was with several more wee-wee visits as well! (Yes!) I pressed on until the updating was all done for the Wednesday post. Temporary Smug Mode, with an iota of self-satisfaction, adopted!

I went on Pinterest for a while. Then the Word-Press reader, finally getting on to Facebooking. This consumed an hour and a half of my precious time. Shuddering Shirley kept having a bash at me, but it seemed for shorter sessions?

I remembered to do the priority Iceland order. It should be due

Off for another wee-wee. This one was of a different style altogether. An RPD (Reluctant-Painful-Dribbling) variety, still the pale grey colouring.

The plates of meat and ankle ulcers were less inflamed. But still, painful when hobbling. 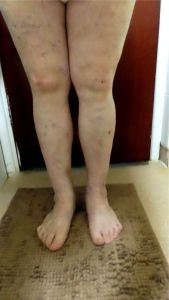 Put Computer Connie in sleep mode, and got the ablutions started.

By gum, it went well! Unbelievably so! No gum bleeding! Only two dropsies of the soap!  No toothpaste or brush dropping! No, I say, No, Shaving cuts! Amazing! Shirley and Nicodemus both in an excellent calmed down mood.

Mind you, I can’t say the same about my attempt afterwards, to try and get the ankle support strap on! That was a failed, painful attempt. A short but discountenancing involuntary right-leg Neuropathic Schuhplattler dance had me over on the floor! Bungle-Grumplewuncks. Banged my back against the floor cabinet, and ever since, I’ve had back Back-Pain-Brenda giving me gip! On the plus side, I got back up from frequently-frequented by Inchcocks torso, wet room floor with relative ease for me.

That was because I needed yet another wee-wee! Hahaha!.

Ah, well! Silver Lining Search – Result: If Dizzy Dennis, Shirley, and Nicodemus stay the way they now, that’ll be great. I can cope with Brenda as she is. I might even regain faith!

I made a brew of Glengettie tea and started to do some graphics for later use. It was slow going, but yet again, I found myself in a remarkably accepting, and submissive frame of mind? An hour and three wee-wees later (All the same style, but the colour had gone from pale grey, back to the orange of ereyesterday).

I hobbled off to make another brew, this time of Thompsons Punjana. I noticed a letter had been pushed through the door and went to nosey. I’ve mentioned the odd noises lately, drilling and knocking. Then espied that the letter referred to Winchester Court? 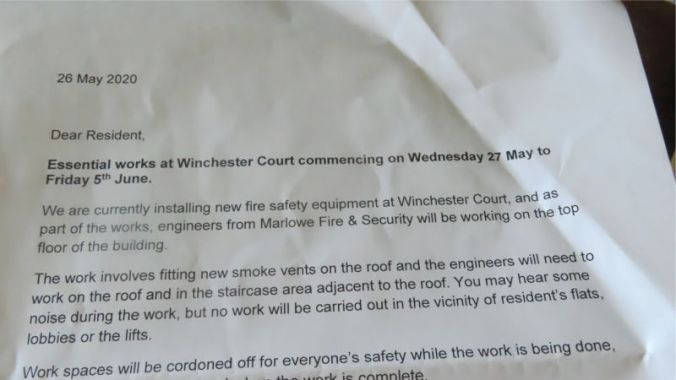 Back to the CorelDraw grindstone. Unfortunately, I’d not got many done and needed more of them. Grufflemoanski!

Ah, the Porcelain Throne is needed! 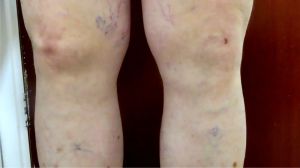 The legs seem to be getting even more clear of the Clopidogrel inspired blobs and blotches. Not complaining, mind, just mentioning it.

There I was, one minute in my newly acquired state of grace, and unflappability, then the weariness came over me, almost in an instant! And no blood test to check the Warfarin level for three weeks, and the next one isn’t due until the 9th of June. I just can’t understand why the sudden change?

What a shame, I was just beginning to get caught up as well. Granglesknackersbuggerit!

I decided to get the skinless Robirch sausages in the oven and make some bread thins sarnies with them, and some cheese, tomatoes, whatever is in the fridge.

My innards, and, or the EQ, were telling me not to have any mash or chips, so I listened and obeyed.

The Dusty Springfield tune, ♫ I only want to be with you ♫ chimed from the doorbell. T’was the appealing ILC (Independent Living Coordinator), Desk Top Dancer, and Warden, Deana. Delivering Pressies, from if I heard correctly, the Nottingham City Homes. Four tea bags, a card (below), and a naughty jam doughnut. (Which I demolished later with my meal, Hehehe!) Along with a postcard notice.

Advice on getting through the lockdown.

I’m a little concerned about scruffy, he keeps falling off of the bookshelves where he lives in peace with Koala Katie. Perfect imitator of me! Hahaha! Koala keeps the spare toilet roll hidden for me as well! ♥

I love them and TFZer folks who sent them for me! And from Australia and Canada, too! I really am lucky, after all! ♥

Got the nosh made up, and on the tray. I wish I’d known how nice the skinless sausages were going to be, too late to add any to the Iceland order any now. Maybe not a bad thing, I’ve plenty of other sausage-based food in the fridge.

Those Indian grown seedless grapes are so lovely too. The last of the lemon mousses, fresh orange drink, the so kindly donated naughty, I shouldn’t be eating jam doughnut, all went down well! Flavour rating: 8.9/10! Yummy!

I was still in a weary-state, so drained. But not ill or anything? Cleaned the pots, checked and double-checked the taps, lights, stove etc. and got my head down in the second-hand, £300, c1968, uncomfortable, none-working, rickety recliner.

When I got settled and the TV on, the vagueness arrived. To be followed, regretfully, by the thought-storms. I’d been free of these for a day or two, but they still gave and left me with fears, guilt, self-worthlessness and depression.

They also lasted far too long, and sleep didn’t come for hours. Grombognangles!