0500hrs: I woke after very little sleeping, and the initial thought activation informed me that I needed to get to the Porcelain Throne with as much haste as was possible. So I did. Escaping the £300 second-hand recliner was relatively pain-free this morning.

The evacuation was of prolific proportions, but minimal bleeding from front and rear.

Washed and got on with the Health Checks, and made up last weeks record on Excel.

Took the medications and made a brew of tea, then started to update yesterday’s Inchcock Today. This took a few hours, too long. For it meant I did not have time to get the ablutions tended to in time to catch the bus to get some bread and milk.

So, I made a start on this blog.

I must say, I feel a lot better than last night. Come to think of it, this should only be expected I suppose. With the horrible depressing, lonely weekend gone and being a Monday, I have a chance of social intercourse with someone today, with the family. (In the block of flats).

I was slightly concerned when a summoning to the Porcelain Throne came again. This time Harold’s Haemorrhoids did bleed, but ‘not a lot’ – as Paul Daniels used to say. Hehe!

I tried to clear up some of the tiny beetles that were all over the kitchen. If they have come through the holes in the wall or through the windows, I don’t know. But I woke up Sunday with some on my stomach and arm. You cannot kill them with fly spray. They have to be crushed until you can feel their shell breaking to get rid of the pesky things!

I’ve already got the black bags ready to take to the waste chute on the way out, all stacked in the kitchen. (Eight small sacks: It is a nuisance with the chute opening being reduced in size – but, it had to be done. Some naughty pensioners have been shoving stuff, like blankets, broken furniture and oil cans down and blocking things up, Tsk!)

When I got in the wet room, the place smelt musty. And twenty or thirty of the little beetles were spread out over the floor. By the time I was ready to have the shower, time was running out for me to catch the bus on time, so I had a stand-up session.

Then the sink plug connector broke off. Tsk!

All ready, at last. I didn’t see a soul as I deposited the black bags, down in the lift, through the lobby and out onto Chestnut Walk all alone. A few workmen were busy at it, both blocks and the new Extra Care build in between.

With a smile, I bade a cheery “Good Morning” to the tractor operator and waved to him. Judging by his lips wobbling and curling, I lipread it as I had got a Phwert or Humph back in return. Hehe!

I hobbled along, enjoying the sunshine, with my hat and arms covered, of course, due to the carcinoma. I don’t half get some funny looks when I have to hide the skin in sunny weather.

In one end, out of the other. Another empty place. No tenants at the bus stop either. I did feel lonely! The temperature read 29°c.

Two lady residents joined me at the bus stop. We had a laugh and chinwagging session.

Crossed over the Mansfield Road. Where I took this photograph of a handbag in raffia on a street decoration. I thought TFZer Lyzzie in America, might like this one. I thought at first; it was a bag of some sort.

Now I see the photograph as I put it on the blog, I’m not so sure, after all. Lyzzi loves her handbags and purses.

I went into the Wilko store and got some of their liquid soapflakes, and a new plug for the wet room sink, well two of them.

I paid the lady and out for a walk down the incline to the Co-op store.

As I walked down to the Co-op shop, it was as if I was in a film noir for a few moments. Melancholy, alienation, bleakness, silence, disillusionment, disenchantment, pessimism, ambiguity, moral corruption, evil, guilt, vague 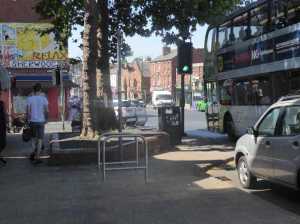 ness and paranoia, all at the same time. I was surrounded by traffic and Nottinghamians, as well.

I then realised that both hearing aid batteries had conked out at the same time. Haha!

The Big issue Lady seller with her three mobile phones was having a day off, today.

Into the store and found some fresh looking pod peas. They didn’t have any sourdough bread or Lemon spring water. I got a bottle of Indian tonic and a Lucozade on Special Offer. 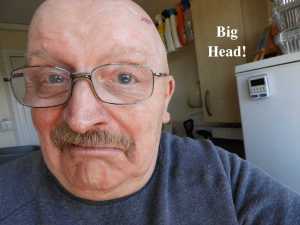 I’d paid the lady and got outside. Had a grubble about in the bags and found some hearing aid batteries at the bottom of the bag. Replaced them, and like a good, caring citizen, I took the old ones and dropped them in the battery recycling box back in the Co-op. 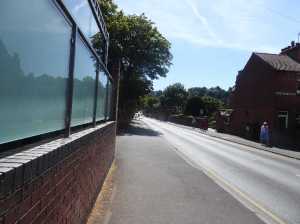 With trepidation, I turned left and along Winchester Street hill, and took a snap of the bottom end of the road. And heard my name being called. It was Cyndy across the road. I didn’t realise it when I took this photograph, but I caught Cyndy in it the picture on the other side of the roadway. Lovely to see her after so long. I can call tomorrow after 1230hrs to give her, her belated birthday chocolates. Good job I’d just put the new batteries in the aids, cause I could hear all she said from the other side of the road. Of course, remembering what she said, might be more difficult. Hahaha!

Now, cheered up considerably by seeing Cyndy, I pressed on up the hill, feeling happier and revivified.

I stopped near the garages close to the top of the road for a breather. Oh dearie me! I’d left the bottle of Lucozade back on Mansfield Road when I emptied the bag to find the hearing aid batteries. 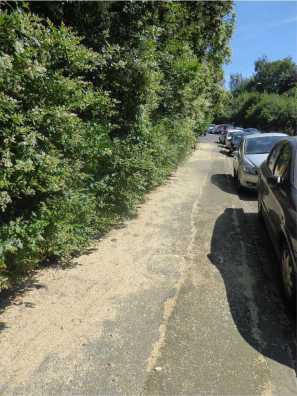 What a Grade ‘A’ Klutz! Too tired to go back to fetch it now, not that it would still be there, of course, it has probably been drunk by a Nottinghamian already, with this heat. Derp!

These and Accifauxpas don’t bother too much, though. I’m lucky suffering from Whoopsiedangleplopilisations so regularly. I become anticipatory of such events, and when they come, they are greeted as a fundamental part of my life. Did I say that? Hehe!

To the top of Winchester Street, the seeds and leaves from the blackberry bushes (I think), had laid a carpet of welcome all the way up to the top of the road.

Turned left onto Chestnut Walk and the flats, old and soon to be new.

Hobbled along to the end block, my beloved Woodthorpe Court. The heat and humidity seem to be getting worse, or stronger whichever way one looks at it.

No signs of any residents lurking about.

The Willmott Dixon lads were still grafting away.

Got in the flats. As I got out of the lift, Obergruppenfurhress Warden Deana appeared through the fire escape door and gave me a hello, which I returned. I actually felt sorry for the gal. She is just back after a fortnight’s holiday (vacation). I assumed with it being the start of the month, she has to check that the monthly wristlet fire-alarm battery checks have been made. I don’t envy her job, with Obersturmführeress Warden Julie away for two weeks, now. All the building works going on, and the tenants irritable and flaking out in the heat. Haha!

I made a battery test call myself later one. But, the stutters came over me while I was doing it. I don’t think it impressed the controller. Tsk!

Put the nibbles away and got on with updating this diary.

Went to the wet room for a wee-wee and found a dozen or two of the little beetles all over the floor, and the room smelt more musty that it did this morning. This reminded me of the sink plug I’d bought still needed fitting. 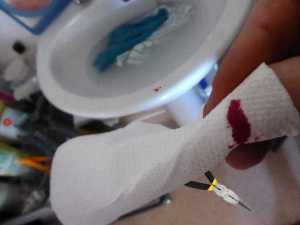 Of course, I could not find the pliers, despite a good ten-minute searching around for them.

I somewhat unthinkingly thought I could bend the wires with a metal cutter thingy.
I put the facecloths in the sink, and part-filled it with hot water, to test the plug. The water slowly drained away as I stood looking at it. Ah, well!

Went to get a drink from the fridge and noticed the thermometer read 35c, about 95f that is. No wonder our gang of old foggies aren’t out and about is it?

I did the Health Checks and took the medications.

But of course, I am not complaining, just mentioning it. No point in my risking getting another telling off from the Nottingham City Homes for complaining about the noise. As the Management, told me; He is doing nothing wrong, just following his hobby of model making, and I’ll just have to live with it. I don’t want to lose my home. Sorry about that, I’ll cross it off.

The weather was getting hotter and hotter, now.

I feel for the lads working outside in this heat. I think they may have given them a break though because the big hoists have not been in use today.

Getting late for me. 1620hrs. But being as I have had trouble getting to sleep lately, I’ll work on. Oh, I am a hero. Hahaha! Got up to here with the updating, had a dizzy, a wee-wee and went on Facebooking.

Caught up with the WordPress Reader section.

1815hrs: Totally shattered now, got the nosh in the oven.

The evening sky was well red and picturesque.

Mary from Australia gave me some tips on making some roast chopped spuds, and I tried it out in this meal.

Not sure if the rich seasoning will affect the innards or not yet, might find out in the morning? Oh, dear!

However, it tasted so good, I enjoyed it very much.

I watched the Japan v Belgium World Cup Match. Being so late, I fell asleep several times and missed the Belgian goals. Humph! So no comments on the match, other than what I did see, had no histrionics from the brave Japanese players.

I can only remember the penalties clearly. And nothing much after the game. It was hours before I drifted off to sleep.