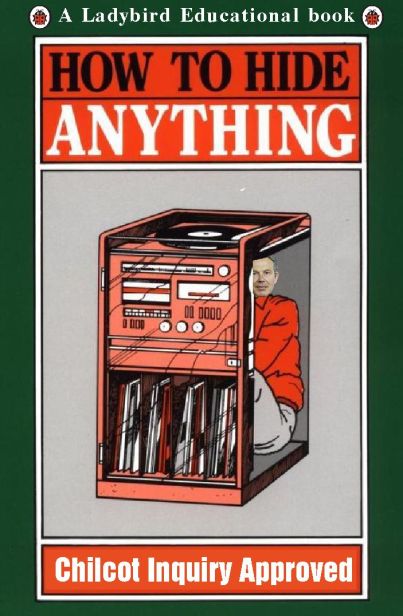 02:50hrs: My expergefaction was a slow one this morning, but still again a different person was dwelling and manipulating the grey-cell’s-box. The ailments were all being sensitive, physically I felt grand. (Apart from the real perception of warmth and wetness from the Fungal Lesion, that was bleeding again, Humph!) But the mind’s attitude was bitter and twisted. I sensed aberrant thoughts with no apparent cause for them. The brain was racing, full of jealousies, hatred for my limitations and situation… It was not a welcome sensation.

As I lay trying to gather together a means of freeing myself of the unwanted worries and aggressiveness, a bit of help arrived, that thankfully changed my attitude back to its usual confused, worried, harmless and none-aggressive pathetically gutless hestitationalistic mode.

I went to press the control button to lower the £300 second-hand past-its-best recliner; I knocked over a bottle of spring water; the telephone charger, TV remote control, and a pen. The pen is still missing. (Found it later, when I trod on it!) Had a painful cleaning up session.

I got the Health Checks done first. 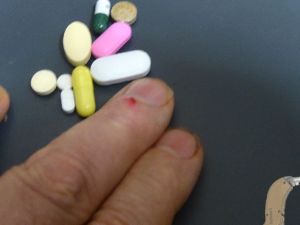 Took the medications and changed the batteries in the hearing aids.

I remembered not to take Dia-Limit, St Peters Wort, and vitamin D+ as I had been instructed. (Smug Mode Adopted, Hehe!)

Getting the blog finished and posted off to WordPress, I decided to stop and get the ablutions done, being as the Morrison order is being delivered twixt 06:00 and 07:00 hrs.

While washing, I espied that I had accrued some brand new unexplained bruises. I was mystified as to what had caused them, I can’t recall banging myself last night? I must remember to put the details on to the Warfarin record. 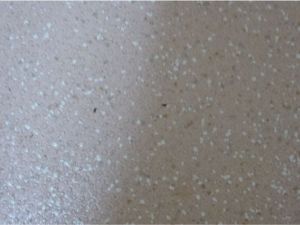 Ten minutes or so later, many (minimum 20) Ironclad black biting mini-beetles/weevils came out to play. Humph! A strategic battle, this one I think, they did not launch their attack en-mass. Instead, they came from many seeming different entry points? This made me check all of the other rooms (both of them – it’s not  a big apartment. Haha!)

I only saw one or two in the kitchen and spare room and two in the hallway. 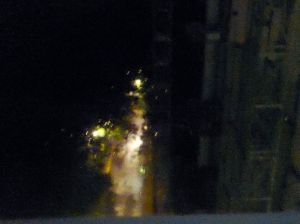 While in the spare room, I took this picture on the left, at the end of Chestnut Walk and the tenants hired garages. I thought it came out a little eerie and artistical for me?

The rain was falling, big spots of droplets were on the window, but not many of them.

Back to the wet room and killed a few more of the Ironclad black biting mini-beetles/weevils. I got around to medicating and cleansing Little Inchies lesion.

Made a start on this diary.

The intercom rang out, the Morrison delivery. He rang back a few minutes later, saying the door had not opened?

I bought less foodstuff this week. Too overloaded with food at the moment.

I wondered why I had ordered the lemon slices? Had I a plan in mind, or did I make another faux pa in ordering?

I went onto the WordPress reader and then the TFZer Facebook. For longer than I had time for as well, Naughty Gerry! 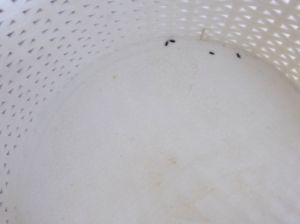 Sorted the black bags for taking to the chute.

Found some of the Ironclad black biting mini-beetles/weevils had been lurking in the waste bin. I got them out and tipped them in the bowl that had washing up liquid and bleach in it from earlier. They just swam out and down to the sink then into the plug hole before I could grab them? 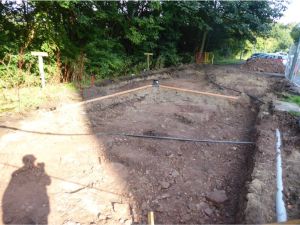 Got down hastily and out onto Chestnut Walk. Cyndy and another lady were in the lobby, and we had a laugh and mini-chinwag.

I noticed that even more car spaces had been dug up on the back verge.

With the risk so high for us old uns with having to use the road to walk in, due to the blocking of the footpaths, and hassle of the upgrading work; I wondered if they were making a graveyard for us? That’s kind of em. Hehehe! 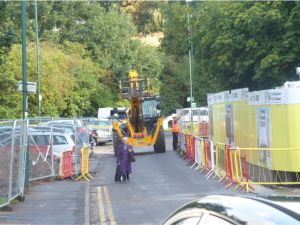 OBergruppenfurheress Julie, and out to the bus stop for some decent nattering sessions with other residents.

I saw the delightful Geordie gal walking towards us with a rather largish plant machinery vehicle coming up behind her.

You’ve got to be brave to live in these flats! Haha!

I got on the City Bound bus, a gal from Winchester Court got on and sat next to me, and we had a giggle and laugh en route. 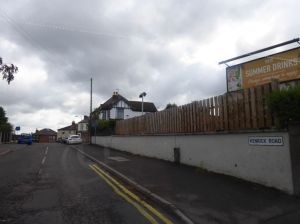 When we got on Kenrick Road on the way, the sky turned dark very quickly.

It continued to be like this for the rest of the morning, on and off.

I got in town, and straight to the hearing centre. The lady who greeted me… well I say greeted; She half looked at and listened to me while using her mobile phone. She was apparently an 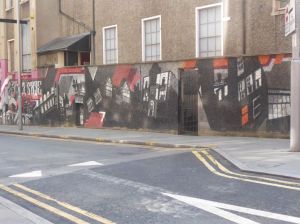 expert receptionist. Her semi-sneer and silent tut-tuts were of supreme quality. I got the batteries and was out of there as quickly as my short little legs would allow me to.

Then had a nice steady walk around town taking photographs of some hopefully, interest for the TFZers on my way.

Passing the old Co-op Theatre, I noted that the 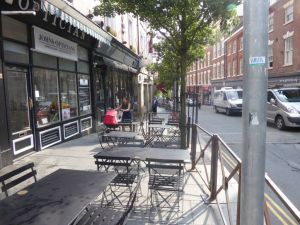 graffiti along the wall had been replaced with some new design.

Not bad, I thought.

To the end on to Goosegate, Hockley.

It was a barren place, almost devoid of Nottinghamian customers for the businesses that were still open and trading to tempt in. 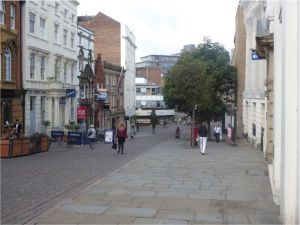 I called in the Caterers supply shop on Fletcher Gate. Hoping they would perhaps sell some effective beetle killer or similar. But no!

Up and over the hill and right down Low Pavement.

I didn’t have to struggle through any crowds on that street either. Lots of closed down retailers 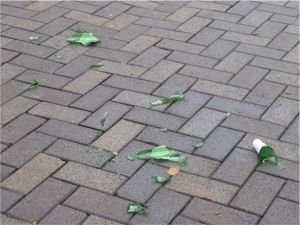 They can be a right uncouth and violent lot, mankind, can’t they? 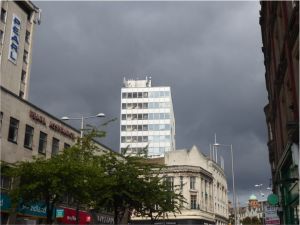 I limped along Wheeler Gate.

With its line of sixteen taxis waiting for trade in the form of customers.

As the sky once again darkened, I noticed how the old Pearl Insurance building almost shone against the clouds.

So, I whipped out the camera and took this shot. And adopted the Smug Mode when it came out nicely. Hehe! 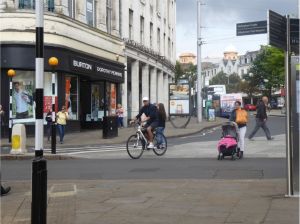 Nearer to South Parade and the slab square with its Nottingham Beach, to take some photographs, even I was surprised at how dangerous this Nottinghamian Pavement Cyclist was riding. The uncaring Schmuck!

He rode quickly from behind between the man and woman with the pram and shot up Friar Lane, the nonce again onto the pavement. Grrr!

I walked along South Parade, close to Exchange Walk. I noticed things that got me thinking, like: 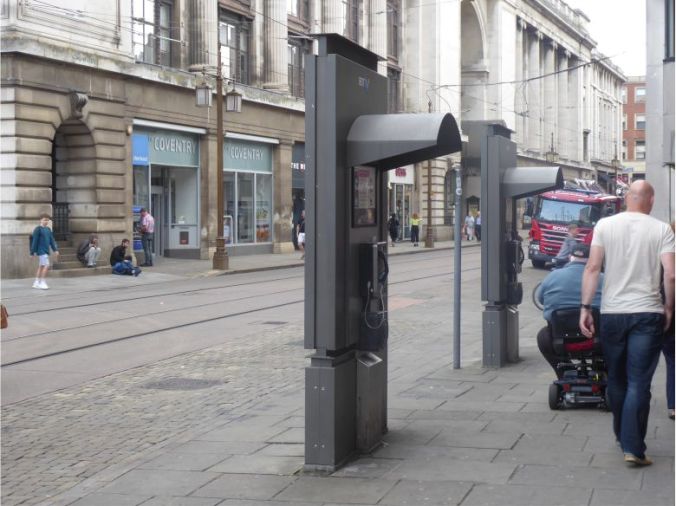 For some reason, this was the first time I’d seen the new public telephones installed. A very American style I thought? Of course, I’ve never been to America. Very smart looking.

The alcoholic and the beggar decorating the Council House steps.

The overweight chap, just coming out of the Wetherspoon pub and swaying about in his hired mobility scooter for free.

A shop that many years ago, my beloved girlfriend worked.

I was daydreaming and deep in thought so much, I nearly walked into one of the telephones. I am a Schmaltzy!

I wandered around the back of the Council House and on to Long Row. Where more Nottinghamian Pavement Cyclists were riding intimidatingly close to the pedestrians, possibly without even realising it. So many, I gave up snapping them, just took these two. 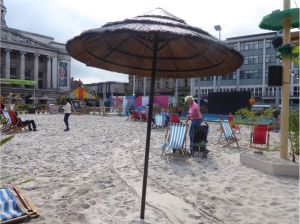 Moved down to the Slab Square and the beach.

As you can see, not many folks about still.

There was a young girl in the air-balloon on the water ride. Naturally, I would not take a photo of her, well, I daren’t nowadays. But she was laughing and throwing herself around so much, it made me smile. No need for iPods to make kids happy is there? 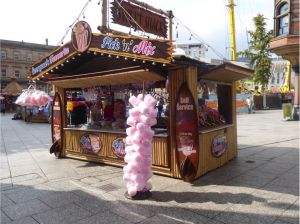 As I made my way up Queen Street to the L9 bus stop, I thought I’d take a photograph of the display of Candy Floss in buckets – its the one I walked into last week and knocked over.

Plenty of time before the bus was due in, so I ambled slowly up the hill, looking in the Reds True Barbeque eatery, a little like Oliver Twist might have, I imagine, nose to the window with the nose twitching.

Boy, the smells coming from that place were… making me more than peckish, rather ravenous would be a better description. The menu combined with the aroma… I’ll have to put eating there on my bucket list… when I make one. Humph! 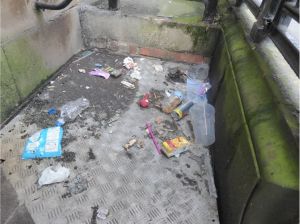 After forcing myself to resist and desist, I hobbled a few yards up the hill, to find this piece of Nottinghamian Street Art.

I plodded to the bus stop, and a bloke from the flats was sat there.

I greeted him with, “Hello there, how are you going?” I was ignored totally. Maybe he didn’t hear me? When the bus arrived, I informed him that it was coming and stood back to allow him to get on. Still no communication from the lad. Ah, well! 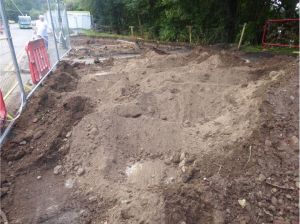 Back at the flats, I stood for ages having a natter with Cyndy, Ethel Bill (William on Sundays) and Frank. Then made my way towards the apartments. Noticing that a second graveyard was being built on Chestnut Walk. Hehehe!

Further down the road, I was overtaken by Pete on his way home, and he didn’t speak to me either? 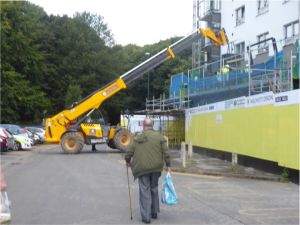 I made my way around the plant machine.

It was lifting the side sections of the replacement windows over from the road to the hoists so the lads could make use of them.

I got in the foyer and Mo, and another lady was sat there. We had a good long nattering session. I’ve enjoyed a few today, they always cheer me up. I asked her she’d used the new bag she bought at Skeggy last Monday yet.

While we were chatting, I remembered that I had a couple of photographs that I’d had printed for Mo. I nipped up and collected them and took them down for her.

Then up to the flat in the lift together, said our farewells and on up to my floor.

I realised when I got in, that I’d been to town and bought absolutely nothing, not even any food! The hearing aid batteries were free. Proud of Myself Mode Adopted!

Got a letter from British Gas telling me about the price hack for next year starting next month?

Started to update this blog. Taken me ages with all the photos to sort out, and now it is already beyond my head-down time with lots of things to do yet.

Stopped to do the Health Checks and medications, too late now to do the midday ones. Putz!

Got the potatoes in the oven, and turned off the computer. I can finish it in the morning. I hope! 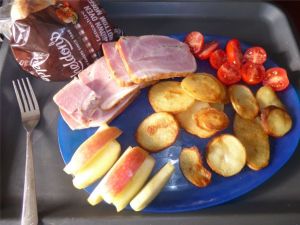 The Nordic Style bacon with herbs, tasted oh, so great!

This was a nosh worthy of a Flavour Rating of 9.5/10. It would have been even higher, but the tomatoes were pretty tasteless.

Very late for me, I got the head down.

I settled to watch an episode of the Heartbeat on TV.

This shop used in the programme always reminds me of a Co-op store I worked at in about 1963ish. The mind drifted back to those days when the first set of adverts came on. Amazingly I stayed awake for the entire show!

But being too late, plans for my watching the Interceptors were altered, when I drifted off to sleep.