03:45hrs: Yet again, I stirred in such a different mood. In an oppugnant frame of mind, and a contradictorily, contrasting state of health compared with the previous morning. No self-pity, gruffness or searching for faults. Ailments… what are they? Hehe!

It genuinely was as if I’d awoken with a different person inside of me had taken charge. A mock semi-positivity reigned. This felt good. But, this is happening more often nowadays, and I know things will change. I just tried to enjoy this new found hard to appreciate certainty while it lasted. (Which was not for long, TSk!)

As I moved to manipulate my short stubby but wobbly body free from the £300 second-hand recliner, I felt the obviously ensanguined state of the PP’s crack, as the dried blood was broken, and a new flowing started. So much for the new positive me!

I could not find my slippers anywhere in the room.

I made my way to the wet room for remedial cleaning and medicating activities to be performed. A repulsive, unpleasant task. (It hurt a bit too. Humph!)

Cleaned up, changed the PPs and to the kitchen to do the Health Checks.

Made a brew, then took the medications.

The Health Check readings looked to be okay to me, I thought.

The uncertainty of everything I do, the realisation that my memory is still doing its own thing, and the fretting and self-criticising began again.

I had to go to the Porcelain Throne in some haste. The passage took about three-seconds at the most. How disappointing! Hehe!

I could only see five of the Ironclad tough black biting mini-beetles in there this morning. Two in the sink, one on the floor and two half way up the shower curtain.

Cleaned up again and back to the front room and put the computer on.

I noticed that the Nottingham City Homes supplied monitor was showing a high humidity level.

Well, within the green range, but the highest it has ever been since I got it.

Does this mean rain is due? Or the opposite? I keep saying I’ll look this up, I’ll try to remember later.

I made a start on doing this blog.

Went to make another brew of tea. WAiting for the kettle to brew, I thought I’d nip into the spare room to have a search for the escaped slippers. Klutz!

No footwear located, but I did find about eighty of the Ironclad tough black biting mini-beetles on and around the window ledge! The Bug Killer cardboard had caught a good few of them. As I started to try to squash the other beetles around, I found that several of them ran up onto my hand in attack mode!

For some reason, many of the few that I actually got to squash, turned to dust when I did so? Others just walked away after I’d pressed down hard on them with the back of my fingernail. The rest abscondicated. Tsk!

What did I do with those slippers?

06:00hrs: I got this far on this page, and then made a start on finalising yesterdays post. Finished it and posted it off. Read comments and went on the WordPress Reader.

Went on the Email checking.

The one on the left here was from the Surgery. It claims to be giving me my INR results.

But it does not do so. I have no idea what my INR level is.

They do give me the dosages for Warfarin for next week, though. Considering how high the daily doses are given, I assume that the level must be low again?

In this email was a link to the results of 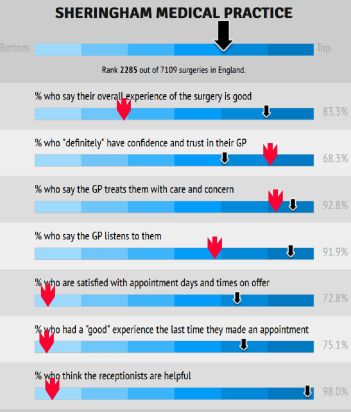 I snipped it from the screen and added some red arrows to indicate how I rated them.

After last weeks farcical five visits, and them telling me they would make me early appointments from here on – I find they give me a 10:20hrs one for my next blood test!

Another day lost. With my tiring so quickly and early in the day, it is difficult to get things done. It is not helping my health really. I have mentioned this to them, but…

I could do with getting a hobble in today. So I’ll get the ablutions done now, and try to stay awake later on to do the TFZer Facebooking done.

Ablutionisational activities undertaken. No shower, too early to disturb the neighbours with the noise it makes.

I tried to take a couple of decent shots of the part erected, not liked, unwanted, thick-framed light and view-blocking balcony that was done yesterday. That will mean more window cleaning for me, just what I need!

Two black bags made up and deposited in the waste chute. Made up a white sack of recyclable stuff and took it down with the cleaned empty tomato sauce jar, on the way out.

As I got outside through the maze and placed the white bag near the doorway and the jar in with the Irish Whiskey, various Scotches, Bacardi 151, Sunset Rum, Champagne, Gin, Spirytus Rektyfikowany, Absinthe, and Cognac empties in the recycle bin.

Gawd, I’m jealous that so many tenants can afford financially and healthwise to drink such delightful memories to me. Hehe!

I didn’t take any photographs other than this one as I hobbled along Chestnut Walk.

Everytime we go out, we face the chalenge of avoiding being hit my vehicles, falling down holes, tripping over iron boards covering trenches and

Because I got into blatherskite type chinwags with Welsh William and two other blokes. The galimatias didn’t seem to bother any of us. Hehe!

Caught the L9 bus into Arnold and went into the Asda (Walmart) store and did some spending at a leisurely pace.

Along with the things actually neede, like the bread, apples and spring water.

I treated myself to a Lamb Moussaka ready-made meal. Got some cream Cakes for the Oberstgruppenführeress Wardens. Bless em!

I had a pleasant but pleasant walk around, it’s a big shop.

I paid the lad on the checkout, and made my way to the bench and sorted out the bags into a more capable way to carry weight distribution. 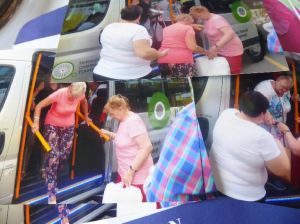 As I was limping out, I spotted the photograph Print machine.

Ah, I thought, I’ll get the photos of the Tennants I took when we got back from Skeggy on Saturday printed, then I can hand them out to the gals in the pictures.

I recalled the mess I made of using this machine last time. So I assumed as calm a state of mind as I could. And, wallah! I got it right! Self-righteous Smug mode Adopted! Hehehe!

Out to the bus stop, and waited for the L9 to arrive. 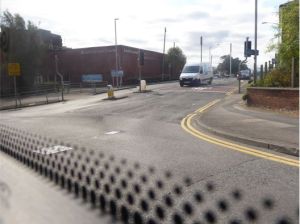 I was fighting against falling asleep all the way back. I did nod off a few times, though.

When we got to the Sherwood Stop, a ganglet of my fellow residents got on the bus. Rita, Sheila, Welsh William, Pete, and Wally.

When we got back to the flats bus stop, Pete was kind enough to make sure I was awake. Hehe!

I had a few words in passing with those getting on the bus. Then made my way into the Nottingham City Homes, Winwood Heights, Unterscharführeress Wardens Temporary HQ, Willmott-Dixon workers breakfast and tea-break room, sarcasm & Insult distribution area, Tenants Socialisation Shed, Telling Inchcock off Zone. Things like crockery and pottery to be stolen from, and somewhere to rest while waiting for the bus, shed.

Dropped off cream cakes, and carried on out and back to the apartment. 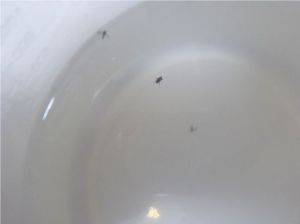 In the wet room for a wee-wee.

On the scales, happy to report I had lost at least half-a-pound since this morning.

It seems the Ironclad tough black biting mini-beetles, have a new ally in their mission to take joint control and be masters of the flat. There they were in the bowl, joined by several flies or gnats whichever. I thought this might have been the Mother-Beetle, she was so large.

Put the bits away and got the oven on, and the minced lamb with gravy and seasoning cooking. Sliced and added the potatoes later.

Got the computer on and updated this diary to here.

Got the minced lamb from pan to oven tray, fingers crossed.

I think I must have missed off a seasoning or flavouring in the lamb, but of course, I can’t remember what I put in last time I cooked it, sad really.

Put the telly on and ate this meal watching a film. ‘The Return of the Pink Panther’, the old ones are the best ones! During a commercial break, I went into the kitchen to get a drink and saw that I had foolishly returned the tray to the oven when I took out the lamb and had left the heat on!

Then managed to burn my finger, catching it on a shelf rail the as I took out the tray.

I think at the time, it only made me jump. Any actual pain must have been masked by my unbelievable tiredness?

I struggled through the Pink Panther with more noddings-off than usual, then missed the ending as my dropping off to sleep turned into a permanent condition. Well, it lasted for hours until I woke up five hours later.

2 thoughts on “Inchcock Today – Wednesday 22nd August 2018: Whoopsiedangleplops continue, but only minor ones”